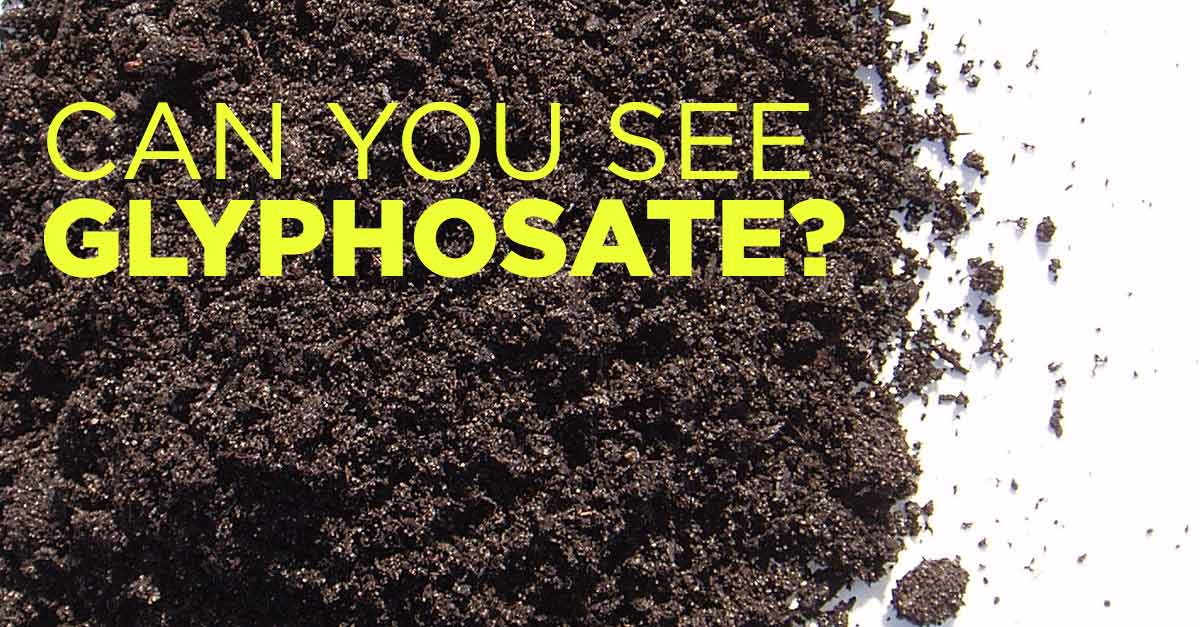 “If we have declared a war against the soil itself, then we are literally committing a species level suicide.” — Dr. Vandana Shiva

In light of this quote, had Monsanto been around during Roosevelt’s time, he would not have taken too kindly to their business strategy. After all, in 2007, 176 million lbs of an extremely toxic herbicide known as glyphosate,1 first created by Monsanto, was sprayed onto the soil (and everything standing between it) in this country, with untold environmental and human health fallout.

Untold, that is, until now…

Roundup (Glyphosate): The Science Vs. Marketing

2011 was a watershed year, as far as scientific revelations into the nature and extent of the damage associated with glyphosate-based herbicide usage and exposure is concerned. An accumulating body of peer-reviewed and published research now indicates glyphosate may be contributing to several dozen adverse health effects in exposed populations. And as we shall see, human exposure is as universal as is the contamination of our food, air, rain and groundwater with this now ubiquitous chemical.

Ever since Monsanto developed, marketed and patented the glyphosate molecule — Roundup (®) herbicide’s active ingredient — beginning in the early 70’s, a substantial and ever-growing portion of the earth’s arable surface has been transformed into an environmental and human health experiment, of unprecedented scale. Non-industry funded human research on glyphosate exposure is only now being performed, and the preliminary picture being painted isn’t very pretty. Recent experimental research found that exceedingly small concentrations of glyphosate (450-fold lower than used in agricultural applications) induce DNA damage in human cells. Given these findings, it is likely that the widespread adoption of GM agriculture has and will continue to result in massive collateral health damage; the fall-out of which we are only beginning to understand, and yet which we are all no doubt are already experiencing, mostly subclinically.

Roundup Ready (®) (glyphosate resistant) genetically modified (GM) plants (also created by Monsanto) now constitute 70% of all genetically modified food plants on the market today.2 This has required the use of increasingly larger quantities of glyphosate-based herbicides in the regions where these plants are cultivated, making human exposures inevitable, and now simply a question of to what degree. Despite manufacturers’ claims, pest resistance to GM crops and commonly used herbicides, are becoming a serious problem, and companies like Dow Agrosciences are seizing the opportunity with newly created GM crops that are ‘three herbicide” resistant, requiring the future use of even more toxic combinations and greater quantities of herbicides in America’s farmlands, including 2,4 D, a chemical once used in Agent Orange.

Glyphosate is now contaminating groundwater in vast subterranean stretches in areas directly and indirectly exposed to the application of this agrichemical; a finding that runs contrary to manufacturer’s claims that glyphosate is readily “biodegradable” and even “makes the soil cleaner,” which it does not. Moreover, one 2011 study found glyphosate in 60-100% of all US air and rain samples tested, indicating that glyphosate pollution and exposure is now omnipresent in the regions within which it is applied.

It is one thing to know that when you consume GM food, you are ingesting glyphosate residues (and secondary chemical metabolites) — at least, as a consumer you always have a choice (economics permitting) of buying explicitly labeled non-GMO, certified organic food. It is another thing to know that simply engaging in necessary biological functions, such as breathing or consuming water, will result in exposure to albeit minute, and yet nonetheless toxicologically relevant and measurable concentrations of this chemical. Where, then, do we draw the line? Is this a form of chemical assault, or simply collateral damage in the agricultural war against pests?

One thing is for sure: Roundup-ready plants are, through their inherent design, destroying the biodiversity upon which our existence depends. Monoculturing itself, as the name implies, involves selecting one plant, or a few chosen “ones,” out of the tens of thousands that once occupied a pre-agricultural habitat, and renaming all other non-target plants as “other” or “weeds,” requiring their destruction. Monoculturing and genetic engineering have transformed what were once unimaginably biodiverse and vast habitats, into agrichemical-saturated wastelands, with half-living, chemically-assaulated GM plants just holding on for dear life by a human-held string, until harvest time.

And yet, the more fundamental and unrecoverable problem may be what has happened to the soil itself during this process of GM farming. It takes approximately 1,000 years for the earth to produce (on its own) a 2.5 inch thick layer of fertile soil. And yet, it may take only a single application of Roundup to irreversibly alter the microbial populations within the soil — much in the same way that a single round of antibiotics may seriously and irreversibly alter your gut flora for the rest of your life.

New research published in the journal Current Microbiology indicates that Roundup herbicide (®) is having a negative impact on the microbiodiversity of the soil, including microorganisms of food interest, and specifically those found in raw and fermented foods.

Microbiodiversity is essential for the global health of our planet. The metabolic activity of microorganisms participate quite literally “at the root” of the nitrogen, phosphate, oxygen and carbon cycles, and are therefore indispensable for the health of the entire biosphere. They are also the most numerous inhabitants in the web of life. There are an estimated 6000000000000000000000000000000 (6 x 10 to the 30th power) bacterial cells on the planet, and soil microrganisms represent about 50% of the the total biodiversity in terms of numbers of species. Soil organisms include fungi, and the mycellium which is technically the largest organism in the world, and have a special importance to the health of this planet.

According to mycologist Paul Stamets, the mycellium may in fact be the “Earth’s natural internet,” a means through which species unrelated in genetic and geographic time and space may communicate with one another, effectively acting like a neural network within the biosphere. These microorganisms (and especially fungi, to which we are more closely related than bacteria) also contain information buried deep within their DNA on the evolution of the tree of life; if destroyed, undiscovered parts of ourselves will no doubt also perish.

This new study found that adverse changes in selected food microorganisms, including death and growth inhibition, were observed at lower concentrations of Roundup exposure than those recommended in agriculture. Researchers also confirmed previous findings that adjuvants or so-called “inactive” ingredients in Roundup formulations were, in some cases, more toxic than the active ingredient itself, namely, glyphosate.

These findings may explain why certain species of Lactobacillus bulgaricus, used in milk production, such as the subspecies Lactobacillus cremoris, have been difficult to isolate from the dairy environment in some geographic areas.

It is likely that the use of pesticides, herbicides and biodiversity reduction (plant varieties in pasture) has contributed to the loss and endangerment of a key species used as a food-starter. When microbial biodiversity in the soil is reduced or altered, so too will that of the plants, all the way up the food chain to the grazing animals, and ultimately the human perched precariously atop the food chain, whose body contains 100 trillion bacteria that come directly or indirectly from the soil.

Glyphosate has been shown in a wide range of other ecotoxicological studies to negatively impact the complex interactions of microbial groups, their biochemical activity and root growth, and subsequently having detrimental effects on plant growth and productivity. Glyphosate also alters microbial populations through changing the pH of the soil, and directly inhibits and/or kills certain soil organisms, while also encouraging the growth of other, potentially less beneficial organisms — again, not unlike the effect antibiotics have on the human gut flora microecology.

It is instructive to listen to those who have reflected deeply on the nature and significance of soil, in order to understand how the biotech/chemical corporation co-option of our global food production system has comprised the health and wellbeing of all future human and non-human generations:

“Essentially, all life depends upon the soil … There can be no life without soil and no soil without life; they have evolved together.” ~ Charles E. Kellogg, USDA Yearbook of Agriculture, 1939

“…the Latin name for man, homo, derived from humus, the stuff of life in the soil.” ~ Dr. Daniel Hillel

“We know more about the movement of celestial bodies than about the soil underfoot.” ~ Leonardo DaVinci, circa 1500s

“Probably more harm has been done to the science by the almost universal attempts to look upon the soil merely as a producer of crops than as a natural body worth in and for itself of all the study that can be devoted to it, than most men realize.” ~ C.F. Marbut, 1920
Please Don’t Sit Idle; Act Now!

Given how the fate of the soil, is our own fate, we can no longer stand by as distant observers as the modern, biotech and chemical company-driven food system grinds onward towards inevitable ecological collapse. It is time we occupy our food system with our forks and pocketbooks. NOT buying GMO food is a first and necessary step. Get involved! Contact your congressmen and women. Join Food Activism and Awareness groups. Support your local growers, or become one yourself! Spread information like this educate, enlighten and empower!