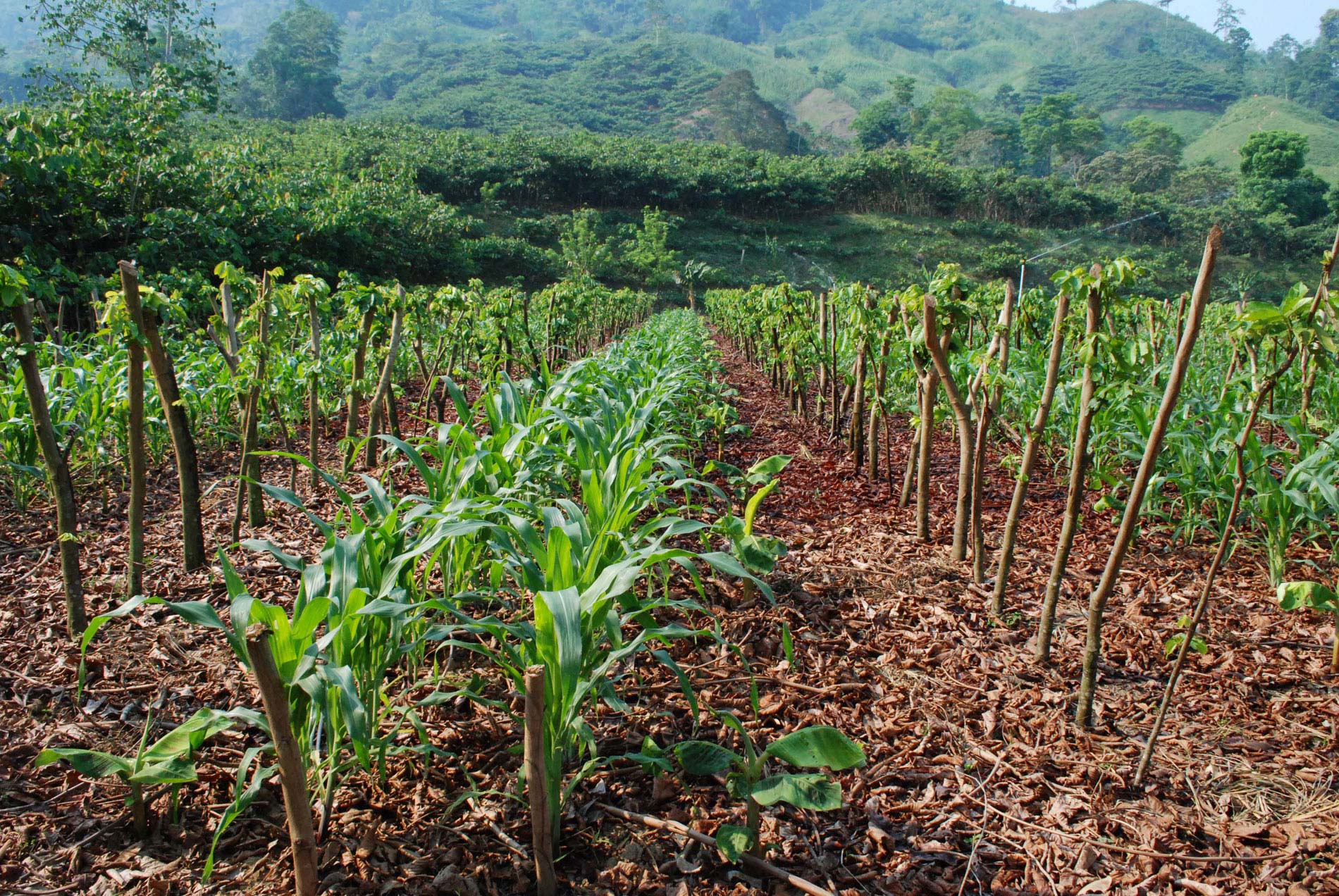 By Lorraine Potter, Inga Foundation • A version of this article was originally published on Forest News.

Five years ago, farmer Damas Nunez had reached a point of economic desperation. He had decided the best option to feed his family was to flee north to the United States from Honduras, despite the risks involved.

He made a farewell visit to a friend with a farm in the upper Cangrejal Valley and was astounded to see a beautiful crop of corn and a large stack of firewood, plentiful enough to last a year.

His friend Eli Cruz had implemented a new agroforestry system known as alley cropping, introduced to Honduras by the Inga Foundation. The method had transformed his fields.

Damas visited the nearby Inga Foundation demonstration farm. He got his own seeds to plant, and the team showed him how to revitalize his degraded plot of land by planting hedgerows of Inga edulis. Damas now has food security and cash crops to sell.

Since 2012, the Inga Foundation’s revolutionary agroforestry system of Inga alley cropping in Honduras has dramatically transformed the lives of 300 subsistence farming families, planted over three million trees, and become a model for true environmental sustainability and ecological resilience.

Damas and his family were following in the footsteps of 40 families that in 2012 planted half their land – less than a hectare in size – in Inga alleys, and half using traditional cultivation methods.

Severe drought followed by torrential rains affected Central America that year, and the families feared their crops would die. However, the Inga trees proved their resiliency. There were only a handful of losses. And although the crops planted between the alleys produced modest yields, there was a basic source of food at a precarious time. The farmers observed that their plot treated with swidden techniques produced nothing, and the soil washed away, while their first alley produced a yield.

The Inga Tree Model is based on over 25 years of research and Cambridge University trials by Inga’s founder and director, tropical ecologist Michael Hands. His research focuses on farming techniques that protect against land degradation. Through the use of swidden, a traditional method known as shifting cultivation or, formerly, “slash and burn,” to prepare the land for planting, land becomes infertile, is taken over by weeds, erodes, and leaves farmers with limited hectarage unable to produce healthy crops. In former times, farmers would just move on to another parcel of land.

Now, through the implementation of Inga alley cropping, families achieve “land for life,” the ability to remain on the same plot of land indefinitely – regenerating steep, degraded land that has been abandoned as “sterile” for over 50 years. Hands and a team of Honduran foresters, agronomists, and field and nursery staff have facilitated native Inga alleys in 15 countries, including Honduras, with training and seeds available at no cost.

The Inga Tree Model as Solution to Slash & Burn

The Inga Tree Model is not just an alternative to swidden; it is a solution to stopping it altogether. Rarely has there been a more successful, simple solution to our most serious global problems.

Now in year nine of the 10-year “Land for Life” program in Honduras, Inga alley cropping has always been a bottom-up program, and over 200 families are on a waiting list for seeds and training to start their own alleys.

The fast-growing, wide-ranging Inga (there are 300+ species of Inga) are easy to germinate, resistant to disease, able to thrive on steep, degraded slopes surviving both seven-month droughts and eight inches of rain falling in 18 hours. When the Inga trees are about 10-15 feet high, they are pruned to chest-high, the leaves stripped and applied as mulch, and the branches become valuable firewood.

The trees require only an occasional side dressing of K-Mag and rock phosphate, through which the 15+ years of trials and demonstration plots from the Cambridge University research, Hands cracked the problem of soils. He learned that failing availability of phosphorus was the key.

The sun is better able to reach the corn or bean seeds planted between rows of trees. And when their season is finished, the Inga have regrown, and the cycle repeats.

The program creates an integrated ecosystem that provides an organic and resilient means for subsistence farming families in the tropics to achieve food security while protecting wildlife habitats, water sources, and improving soils.

The Inga Foundation model can be replicated, at scale, across the whole of the wet forest zone of Honduras, the rest of Central America, and into South America. We have facilitated Inga alley replication in 15 countries with farmer/NGO/government groups by providing training to families.

“I was working for so little for someone else, when I could find work, that I could not feed my family. But now, with the Inga tree alleys for planting, I am a producer,” Damas said.