Search Join Us
Food Revolution Network
Search
Join Us
21,359 Readers
Food and Animals Food and Health Food and the Environment 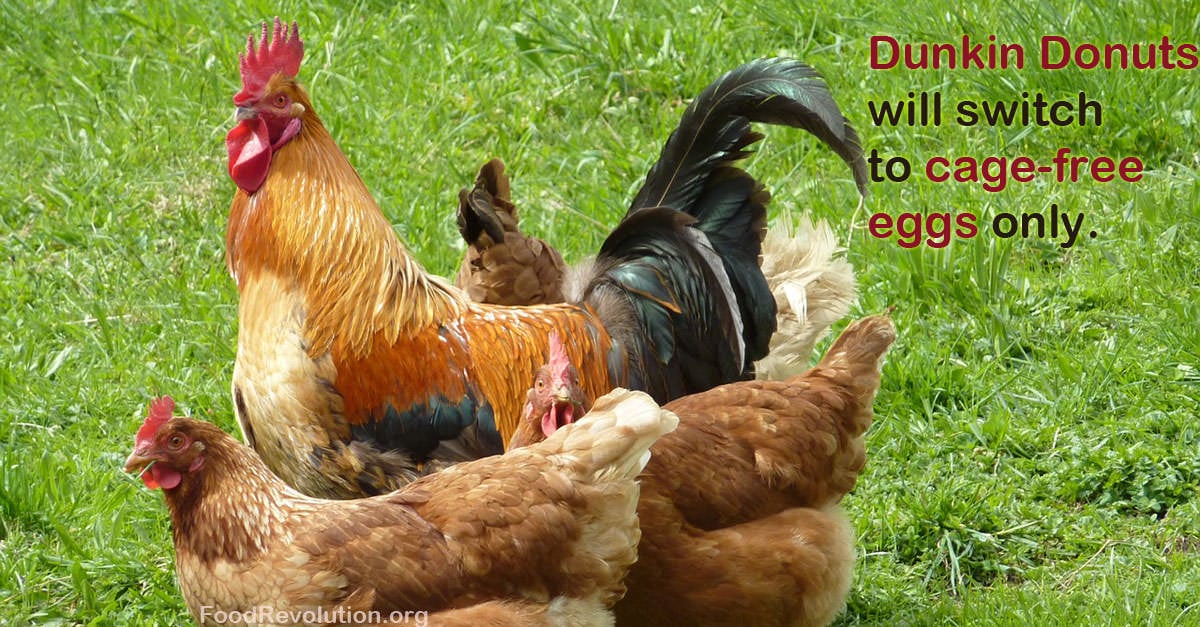 If you don’t think we are in the midst of a period of punctuated change for animals on factory farms, and specifically on the use of gestation crates and battery cages, you haven’t been reading A Humane Nation. On December 7, in the latest in a rapid-fire torrent of recent announcements, I’m proud to announce that one of our nation’s best-known restaurant brands, Dunkin Donuts, will switch to exclusively cage-free eggs at all its 8,000 U.S. locations by 2025. With eggs being used for Dunkin Donuts’ breakfast sandwiches and baked goods, this will translate into better living conditions for 1.4 million hens annually, once the policy is fully implemented.

Over the past few months, we’ve worked with everyone from McDonald’s to General Mills to Panera Bread to numerous other food industry icons to create policies that demonstrate that ultimately even the use of one egg from a caged chicken is not an acceptable outcome for their companies. Last week, Royal Caribbean Cruise Lines announced that it will switch to 100 percent cage-free eggs by 2022. Royal Caribbean is one the world’s largest cruise operators, using roughly 100 million eggs a year. And a Mexican food giant, Grupo Bimbo, made a similar announcement. Grupo Bimbo is the world’s largest baking company, operating the largest commercial bakeries in the United States, Mexico, and Spain.

“We are proud to continue our efforts towards sustainable sourcing,” Dunkin’s Christine Riley Miller, senior director of corporate social responsibility, stated in our joint release today, “and [we] are committed to our partnership with the Humane Society of the United States to help the egg industry eliminate the use of cages in our supply chain.”

The passion with which Christine Miller and other food-industry leaders are tackling this issue is a tremendously encouraging sign for all of us who want business to be part of a broader set of solutions in our society. We’ve simply come to the point that it’s become socially objectionable for a company to be without a plan to get out of the cage-confinement supply chain. Keeping hens in cages and veal calves and breeding sows in crates barely larger than their bodies is rightly viewed as a violation of their well-being.

Many of these companies, especially Dunkin’ Donuts, have enormous footprints in Massachusetts, and the announcements collectively add so much momentum to the landmark ballot initiative in play there. Last week, we submitted the first tranche of signatures in the process of qualifying the measure for the November 2016 ballot. The Massachusetts measure would not only ban extreme confinement, but require all food retailers who sell eggs, pork, and veal to adhere to that same modest standard.

The fact that so many big brand names are embracing anti-confinement purchasing practices eviscerates the argument from proponents of factory farming that our ideas are impractical or needlessly costly. Our work with a huge swath of American food corporations shows that our policy objectives are right in the center of American political and corporate and consumer thought.

Dunkin’ and others food retail giants really have delivered.