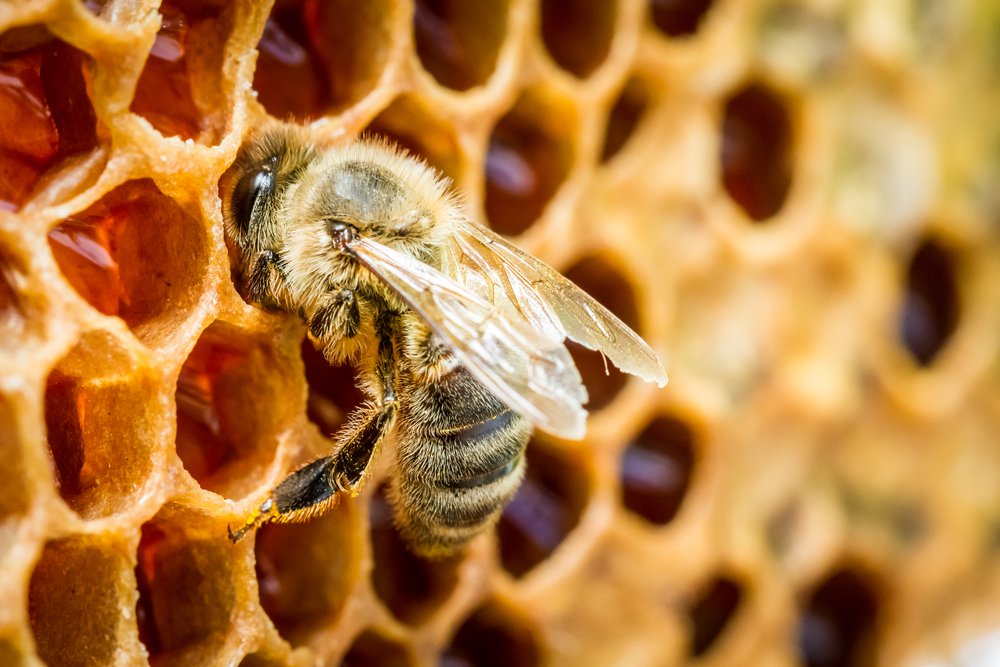 Michele Simon was a speaker in the 2012 Food Revolution Summit. Recently she released a report, produced in tandem with Friends Of the Earth, to bring attention to the dire situation of declining bee populations caused by pesticides. You can find the report here, and read a summary below.

If you like to eat, then you should care about what’s happening to bees. Did you know that two-thirds of our food crops require pollination – the very foods that we rely on for healthy eating – such as apples, berries, and almonds, just to name a few. That’s why the serious declines in bee populations are getting more attention, with entire campaigns devoted to saving bees.

A strong and growing body of evidence points to exposure to a class of neurotoxic pesticides called neonicotinoids—the fastest-growing and most widely used class of synthetic pesticides—as a key contrib­uting factor to bee declines.

The European Union banned the three most widely used neonicotinoids, based on strong science indicating that neonics can kill bees outright and make them more vulnerable to pests, pathogens, and other stressors. Enter the corporate spin doctors.

As my new report with Friends of the Earth details, three of the leading pesticide corporations—Bayer, Syngenta, and Monsanto— are engaged in a massive public relations disinformation campaign to distract the public and policymakers from thinking that pesticides might have something to do with bee death and destruction.

Big Tobacco honed these strategies for decades, stalling action that resulted in millions of preventable deaths. As Bayer stockholders meet in Germany this week, this report shines a critical light on these destructive corporate practices.

Here are the 7 tactics pesticide companies are using to spin the bee crisis:

Big Tobacco perfected the art of self-serving public relations, to appear to care about the very problems your products cause and offer alleged solutions.

A key element of the pesticide industry’s PR strategy is to go on the offensive by creating an elaborate appearance of being “out in front” and taking a lead role in “saving bees.” For example, last year, Bayer launched its mobile “Bee Care Tour” at the Ag Issues Forum and Commodity Classic in Orlando, Florida. The tour continues in 2014, with stops at Oregon State University, Washington State University, University of California, Davis, South Dakota State University, and Purdue University. In June, the Bee Care Tour will be on hand for National Pollinator Week in Washington, DC.

2.    Creating Distractions: Blame Anything but Pesticides

Big Tobacco was a master at inventing diversions, to ensure the public wouldn’t place blame where it belonged. The idea is to create uncertainty; as one tobacco industry executive famously put it: “Doubt is our product.”

Similarly, Bayer, Syngenta and Monsanto have deployed a mix of PR tactics to divert attention away from neonicotinoids as a key contributor to bee declines. They have typically promoted a “multiple factors” argument that downplays and manufactures doubt about pesticides’ role, while emphasizing varroa mites, pathogens, and bee forage as primary forces threatening bees.

For example, Helmut Schramm, head of Bayer CropScience Germany, explained: “It’s generally known that the varroa mite is the main enemy of the bee.” To further distract attention, Bayer has even erected a giant sculpture of the varroa mite on a bee at its “Bee Care” Center in Germany.  As the New York Times notes, “Conveniently, Bayer markets products to kill the mites too.”

Big Tobacco was so intent on twisting the science of smoking that they created “The Tobacco Institute” for the purpose of funding industry-friendly science.

All three companies – Bayer, Syngenta, and Monsanto – are strengthening their reach into the scientific community to enhance the credibility of their case that anything but pesticides are to blame for the honeybee collapse. Companies are funding scientific studies, cultivating alliances and strategic partnerships with farmers, beekeepers, and agricultural organizations in order to bolster the legitimacy of their arguments and position themselves as “friends of the bees.”

A related way that Big Tobacco distorts science is to pay fund researchers and co-opt professional organizations. Once again, pesticide companies are following that lead. For example, last June, Monsanto hosted a three-day “Bee Health Summit,” where the company greatly expanded its reach and influence in the scientific community.

At the summit, Monsanto announced the formation of a Honey Bee Advisory Council, a strategic alliance comprised of Monsanto executives themselves along with others. Even with a friendly audience, a post-summit survey found that only 14 percent of attendees felt pesticides were covered well or usefully.

Also, the British Bee Keepers Association has received significant funding from Bayer, Syngenta, and other pesticide companies, an arrangement that some critics have called a quid pro quo for the organization’s endorsement of insecticides as “bee-friendly.”

Another common tactic of Big Tobacco is to blame smokers who “should have known” that smoking was deadly. This shameless strategy is now being used by pesticide companies. For example, Bayer’s Bee Care website emphasizes the “bee-responsible use” of its products and implies that any problem with neonics is because of improper use of its products by farmers and others.

Similarly, Syngenta claims: “The small number of instances of damage to bee health from these pesticides has come from the very rare occasions when farmers have used the product incorrectly (e.g. not followed label instructions).”

Syngenta even blames human fear for bee declines saying: “Many people are afraid of bees, wasps, hornets, and many other flying insects. This fear converts, unfortunately, into a major health threat to bees, as too many people simply kill them if they fly into a home or too near to people.”

Just as Phillip Morris aimed the Joe Camel character at youth, now comes the children’s book from Bayer called “Toby and the Bees” in which a friendly neighborhood beekeeper explains to young Toby that bees are getting sick but “not to worry” as it’s just a problem with mites, and a special medicine will make the bees healthy – made by Bayer. In another attempt to mold young minds, The Bayer Bee Center is now promoting a coloring contest dubbed “Color Me Bee-autifully” to “encourage students 12 and under to learn about bee health.”

The European Union is far ahead of the United States when it comes to taking action to protect bees from the harmful impacts of neonics. Just as Big Tobacco curries favor with policymakers, so does the pesticide industry.

Documents obtained by the Corporate Europe Observatory revealed that Syngenta, Bayer, and the European Crop Protection Association (the pesticides makers’ lobbying group) were engaged in a private behind-the-scenes lobbying campaign that began as early as June 2012 to prevent a ban on neonicotinoids in the European Union. Through a series of letters, these companies made accusations with questionable scientific or factual backing in an effort to convince European Commissioners that neonicotinoids were not the problem.

Action Needed Now to Save the Bees and our Food Supply

Policymakers, the media, and the public should be aware of these tobacco-style tactics, which were used for years to mislead and delay policy action for decades. We cannot afford the same delay in protecting bees from further harm.

It’s time for the United States government to follow the lead of the European Union to protect bees and our food. EPA should heed the growing body of science linking neonics to bee declines and limit the use of these pesticides. Congress should pass the Saving America’s Pollinators Act. The White House should push both Congress and federal agencies to move quickly.

We must act before it’s too late. Our very food supply is at stake.