These Supermarkets Are Encouraging Healthy, Plant-Strong Eating — Could This Idea Grow? 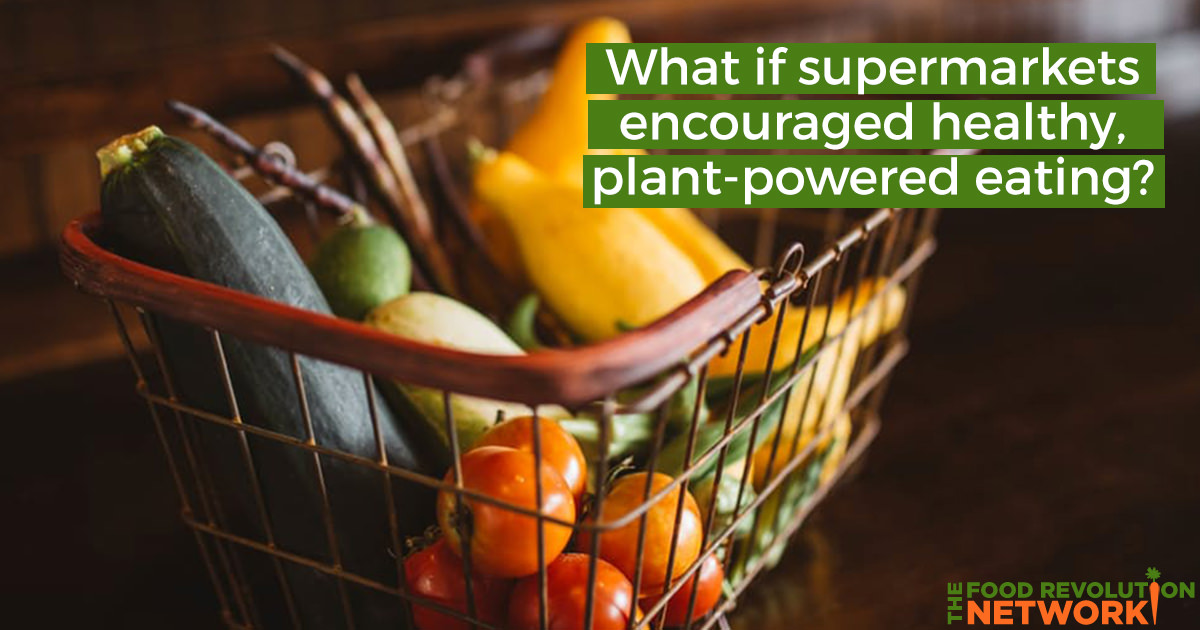 If Supermarkets Made Simple Changes to Influence Consumer Behavior, They Could Have Dramatic Effects on People’s Health and the Planet

Though you may not realize it, supermarkets are designed to subconsciously influence your behavior. Typically, the foods stores persuade shoppers to buy are highly processed because these items make the most profit.

For example, placing candy and other sugary snacks near checkout registers has been proven to be good for business — even though it’s also clearly bad for your health. But what if supermarkets encouraged healthy, plant-powered eating?

A just-launched experiment in the UK is seeking to answer that question. Researchers are working with a large supermarket chain to make changes in their stores to encourage people to choose more vegetables and less meat — to benefit their health and the planet.

This experiment comes in the wake of an Oxford University study published in the Proceedings of the National Academy of Sciences last year that said eating less meat could save 8 billion lives and cut greenhouse gas emissions by 30-70%. The study also concluded that $1.5 trillion in healthcare and climate change-related costs could be saved by 2050 if people reduce their reliance on meat.

University of Oxford scientists are collaborating with Sainsbury’s executives in a program being funded as part of the Wellcome Trust program, Our Planet, Our Health, which aims to improve human health and fight climate change. A range of Sainsbury’s stores — including local stores, superstores, and its online shopping service, will be involved in the experiment.

Changes being made to influence behavior include:

Many of Sainsbury’s customers are already choosing meat-free products and dairy alternatives, but for some, these changes are often only short term. Through this five-year experiment, Sainsbury’s aims to help customers make more informed choices and to encourage long-term healthy and sustainable diets.

Their goal isn’t for everybody to give up animal products; it’s to help more people to move in a plant-powered direction, and in the process, to contribute to consumer health and to help to mitigate the impacts the food system is having on climate change.

Why this idea could work

Supermarkets and grocery stores are places where people go regularly, and many food choices — 60% in fact — are unplanned and made in the store.

One key component is the placement of products. If healthier and meat-free alternatives are placed in high-traffic areas, more people are likely to buy these products.

According to a report by the Catalina Marketing Institute, 66% of grocery shoppers are looking for ways to improve their health and wellness. Shoppers are open to services that help them make healthy food choices and manage health concerns, but only half of people in the study said their supermarket helps them in these efforts.

This isn’t the first-time supermarkets and grocery stores have taken a more active role in their customer’s health. And it’s not the first-time researchers have conducted similar experiments — though it may be the first scientific experiment to encourage plant-based eating, specifically.

A public health researcher who conducted a review of studies from more than 40 years into supermarket interventions for promoting healthy shopping, says the more angles the interventions cover, they more successful they have been.

According to one study, handing out recipe flyers at a store entrance with words like “healthy” caused people who were overweight or dieting to subconsciously buy fewer snacks. Customers bought 75% fewer snack items than those who didn’t receive the flyer. Another study found that brief shopping education resulted in people purchasing more fruit and dark green and yellow vegetables.

Overall, more and more consumers are wanting nutritious, healthy options. And more people are choosing plant-based foods. Therefore, Sainsbury’s executives expect a majority of their customers to support the healthy, plant-based changes. And it also means these types of changes might be supported at other stores — not just in the UK.

How you can take action

If more supermarkets made changes to encourage healthy, plant-powered choices in effective ways, shoppers would become healthier and more conscious about the food they eat. And this would have a dramatic impact on the health of our planet as well.

So, we’re supportive of this idea, and if you are too, one thing you can do is to contact your local supermarkets and tell them what you want. If customers are demanding healthy, plant-based choices, stores will take notice.

In the United States, plant-based foods now have a lobby, the Plant Based Foods Association, so this group could influence supermarkets and grocery stores to make changes to their stores.

What do you think of this idea? Would you like it if your supermarket offered more healthful foods and encouraged you to make healthier choices?