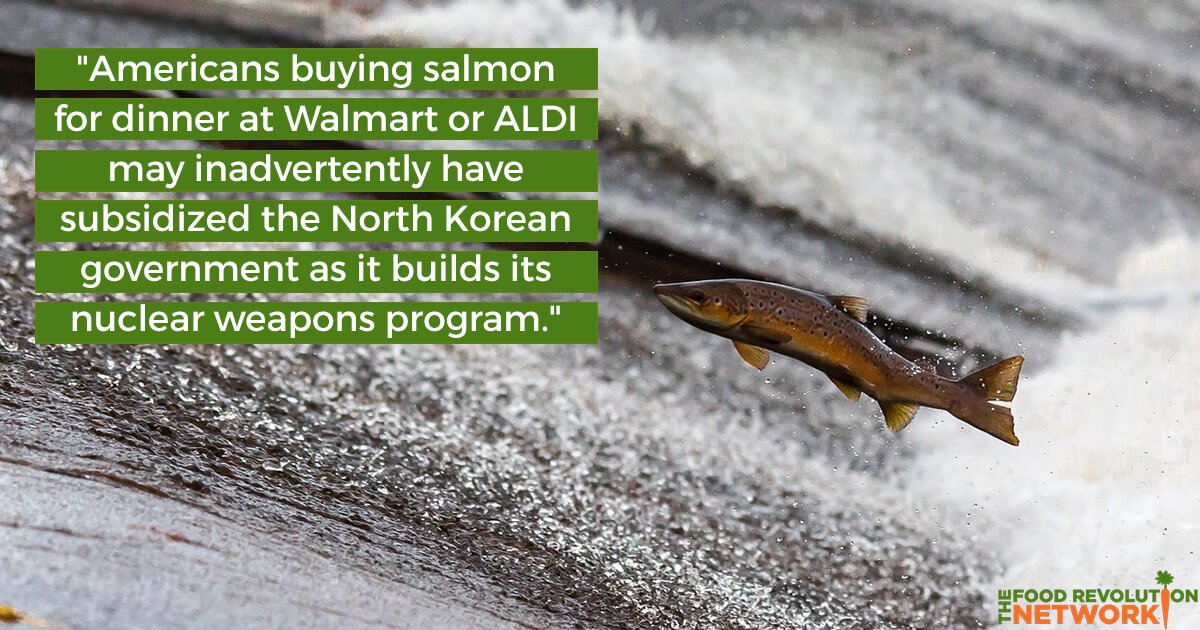 By Claire Brown • Originally published by The New Food Economy

How U.S.-caught seafood subsidizes the North Korean government on its way to the Walmart freezer

On Wednesday, October 5th, the Associated Press released a bombshell investigation into China’s use of North Korean labor, specifically focused on workers processing seafood in a Chinese plant. While it’s not exactly news that North Korea sends its citizens to be “guest-workers” elsewhere in the world—in July, The Guardian reported on how the practice helps the country offset devastating sanctions—the story contained a major revelation: The snow crab, salmon fillets, and squid rings produced in the plant end up in American homes.

“Americans buying salmon for dinner at Walmart or ALDI may inadvertently have subsidized the North Korean government as it builds its nuclear weapons program,” according to AP, since the country kept up to 70 percent of its guest-workers’ paychecks. “Their purchases may also have supported what the United States calls ‘modern day slavery’—even if the jobs are highly coveted by North Koreans.”

It’s a crazy story, and well worth the read. And like AP’s Pulitzer Prize-winning 2016 report on slavery in Thailand’s shrimp industry, it’s a reminder that our seafood food supply chain is still largely invisible—even when the dish on the table is as bare bones as a salmon steak.

But one detail in this story hits closer to home than the living quarters described in the piece—a faraway, harshly-lit dormitory in Hunchun, China. Some of the seafood in question, painstakingly picked apart by North Korean workers, was snow crab originally caught in Alaska. Which means the crustaceans somehow made the 4,000-mile journey from Alaska to China, before traveling 4,000 miles back to American distributors like Rhode Island’s Sea-Trek Enterprises, which ultimately shipped them out to retailers all over the world.

Turns out, it’s common for U.S. seafood companies to send their catch to China for processing. In 2005, the Seattle Times published a story probing a single company’s decision to send 30 million pounds of its Alaskan salmon and Dungeness crab catch to China for filleting and de-shelling. In terms of raw profit, the decision has a kind of graceful economic logic: “Something that would cost us $1 per pound labor here, they get it done for 20 cents in China,” Charles Bundrant, founder of Trident Seafoods, told the paper. Even after the company accounted for the cost of shipping seafood thousands of miles (and keeping it cold the whole time), sending it to China was still worth the time and money. Fish and crabs are full of tiny bones, Bundrant reminded the paper, and it’s tough work that can’t currently be automated. Human hands are still the best at picking them clean.

As The New Food Economy reported last month, this problem—millions of tiny bones and no one to pick them out—is exacerbated by an ongoing labor shortage in Alaska. It should’ve been a banner year for the salmon catch in Bristol Bay, but seafood companies weren’t able to hire enough employees to gut all those fish. The companies, which typically recruit workers from as far away as Guam, pay about $10 an hour, not enough to entice local Alaskans to take up a dirty, grueling job. At the same time, processors weren’t able to take advantage of the country’s limited quantity of H-2B visas for non-seasonal guest workers. Two companies profiled by our reporter Sarah Gibson had actually built new facilities to avoid sending their headed and gutted salmon to China and Japan for filleting. But the labor shortage meant they couldn’t staff those new operations, and the low profit margin for wild-caught salmon meant they couldn’t offer employees higher salaries. The region’s snow crab fishermen, it seems, face a similar labor bottleneck.

When you consider the ongoing shortage of processing staff, the temptation to ship American-caught seafood out to Asia starts to make more sense. The National Oceanic and Atmospheric Administration (NOAA) estimates that between 2010 and 2014, about a quarter of the U.S. snow crab catch was exported to China.

Once in China, crab meat is picked out of the shell and sold elsewhere—often to Japan, which is the second-largest consumer of snow crab in the world. That global cold chain is made more economically feasible by the use of North Korean laborers, who, according to AP, are reliable and inexpensive. Officially, the U.S. considers all North Koreans working abroad to be engaged in “forced labor,” and while their toil can be bought cheaply, the numbers add up. AP estimates that the North Korean government is sending tens of thousands of workers worldwide, netting as much as $500 million a year. “That could account for a sizable portion of North Korea’s nuclear weapons and missile programs, which South Korea says have cost more than $1 billion,” according to the report.

The story’s impact may prove to be explosive. It will undoubtedly provoke anger at the likes of Walmart for inadvertently subsidizing the North Korean government. And major American companies may have violated federal law, thanks to an order signed by President Trump in August that banned the import of goods produced by North Korean labor anywhere in the world. There may be political implications, too, at a time when diplomacy is quickly flailing—tempers are flaring between two nuclear powers over real and perceived slights, and rhetoric is ratcheting up.

All so no one chokes on a fishbone.

This article was originally published by The New Food Economy, an independent, non-profit newsroom that investigates the forces shaping how and what we eat. Sign up for their newsletter here.