Infographic: The Health Benefits of the Dandelion 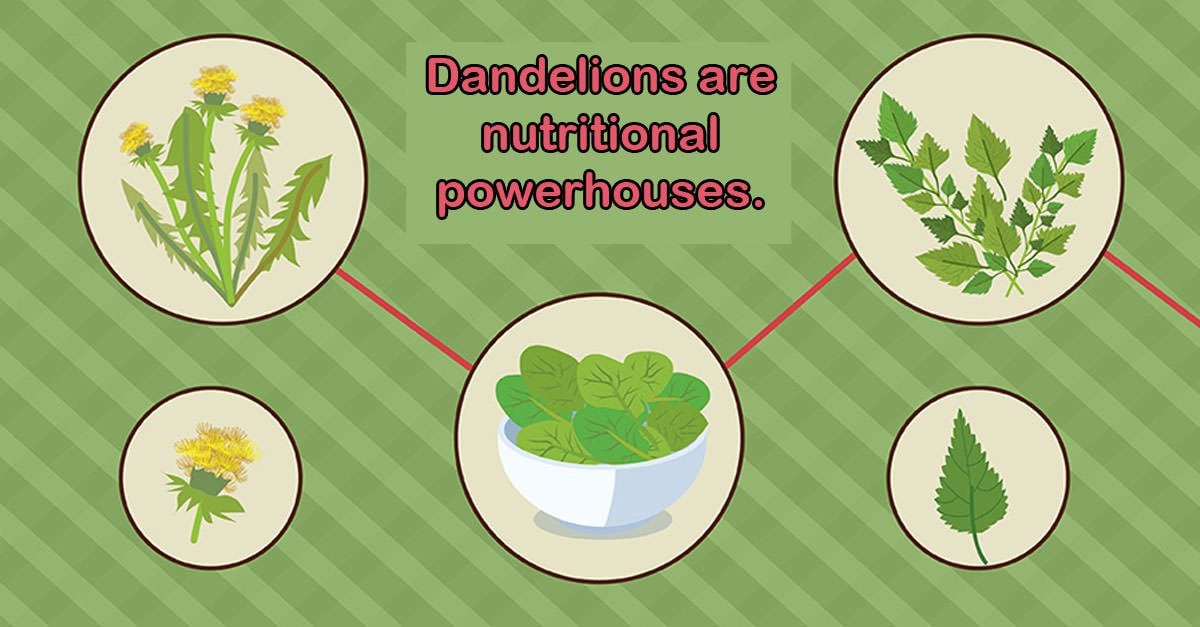 Many people battle the humble dandelion, which grows in lawns and sunny open spaces throughout the world. But if these maligned yellow-blossomed plants pop up in a yard or garden, there’s a better way to control the problem: eat them.

Every part of the dandelion is edible – leaves, roots, stems, and flowers. And the plants are nutritional powerhouses. The greens are rich in beta-carotene, fiber, potassium, iron, calcium, magnesium, phosphorus, B vitamins, and protein. Their nutrition profile compares favorably to kale and spinach and trounces iceberg lettuce, the most widely eaten salad green in the United States.

It may sound strange to forage in the backyard for dinner, but wild greens were once a dietary staple around the world. Many cultures still eat them regularly. Dan Buettner, author of The Blue Zones Solution: Eating and Living Like the World’s Healthiest People, partly attributes the longevity of natives of Ikaria, Spain to their daily consumption of wild greens, including dandelion leaves.1

Some North Americans have caught on to dandelion’s superfood status. High-end farmers’ markets and boutique grocery stores often sell them in small, expensive bundles. But thrifty consumers can gather dandelions from lawns and urban meadows for free. However, not all dandelion greens are equal. It pays to know when and how to safely pick them.

How to Harvest Dandelion Greens

First, be sure to identify dandelion correctly, because it has a few doppelgangers. Look for smooth leaves shaped like jagged teeth. (The flower’s name comes from the French dent-de-lion or “tooth of lion.”) Dandelions’ thick stems are hollow and filled with milky sap. Catsears – dandelions’ most ubiquitous look-alike – are often called False Dandelions. They are distinguished by hairy leaves with round lobes and wiry, branched stems. Catsears are edible, but the leaves are not as palatable as those of the dandelion. Pick dandelion leaves from lawns free of pesticides or herbicides. Avoid areas near building foundations, streets, and driveways, where the soil’s lead levels tend to be highest.2 Wash the greens well if they’re from a place frequented by pets.

For the most tender and least bitter greens, herbalists advise foragers to harvest before the plant flowers. However, it can be tricky to find the leaves before the blossom appears. Raw dandelion greens will probably taste bitter to most people, regardless of when they’re harvested. The key is to look for tender leaves and learn how to prepare them based on taste preferences.

The affinity for bitter foods varies from person to person. Scientists have discovered supertasters (people who have a supersensitive sense of taste), non-tasters, and everything in between. Raw dandelion greens taste particularly unpleasant to supertasters.3 But that’s no reason to lose out on the benefits of this nutritious plant. Fortunately, there are plenty of tactics to tame the bitterness of dandelion greens. Moreover, food preferences are malleable and based on exposure. In addition, many health experts believe bitterness is an important, often-neglected key to optimum wellness.

Bitter compounds are plants’ way of protecting themselves from being eaten by mammals. Bitter plants are more likely to be dangerous to humans, so we’re acutely sensitized to the taste. However, bitter plants are also more likely to be highly nutritious, because phytonutrients have a bitter, sour, or astringent taste.4 It’s no coincidence that kale, broccoli, Brussels sprouts, and other phytonutrient-rich foods are bitter.

Unfortunately because of consumer preference the food industry has largely bred bitterness out of our food.5 As a result, we lose out on more than just nutrition. Bitterness is important for liver health. It stimulates the liver to produce bile, which aids digestion and nutrient availability. Bitter foods also modulate hunger.6

Clinical herbalist Guido Masé believes a daily dose of bitterness could eliminate the need for many food-restriction diets. And physician and author Dr. Tieraona Low Dog recommends pre-meal bitters for people with food and environmental allergies, gas and bloating, and sugar cravings.7

Eating dandelion is an excellent way to benefit from bitterness, and dandelion’s curative powers go beyond its bitter taste. It has been used as a medicine for thousands of years for numerous conditions. In fact, its Latin name Taraxacum officinale means the “official remedy for disorders.”

Native Americans boiled dandelion and drank the water to treat kidney disease, swelling, skin problems, heartburn, and stomach troubles. The Chinese use the plant to treat breast and stomach issues and appendicitis. In Europe, it’s been used for fever, boils, eye problems, diabetes, and diarrhea.8

Modern scientific studies are scant, but research has confirmed dandelions as a folk-remedy diuretic. It is prescribed for edema in Germany and may be safer than other remedies because it replenishes potassium.910 Preliminary animal studies suggest that dandelion may help normalize blood sugar and fight inflammation.11 Dandelion root extract caused cancer cells to destroy themselves in a Canadian lab study, which prompted a clinical study (the results of which are not yet available).12

Consuming dandelion is generally very safe, although some people may be allergic to the plant, and patients with gall-bladder conditions and gallstones should talk to a doctor before ingesting it.13 For the vast majority of people, dandelions are a highly nutritious and beneficial addition to the diet. When prepared well, they’re also delicious.