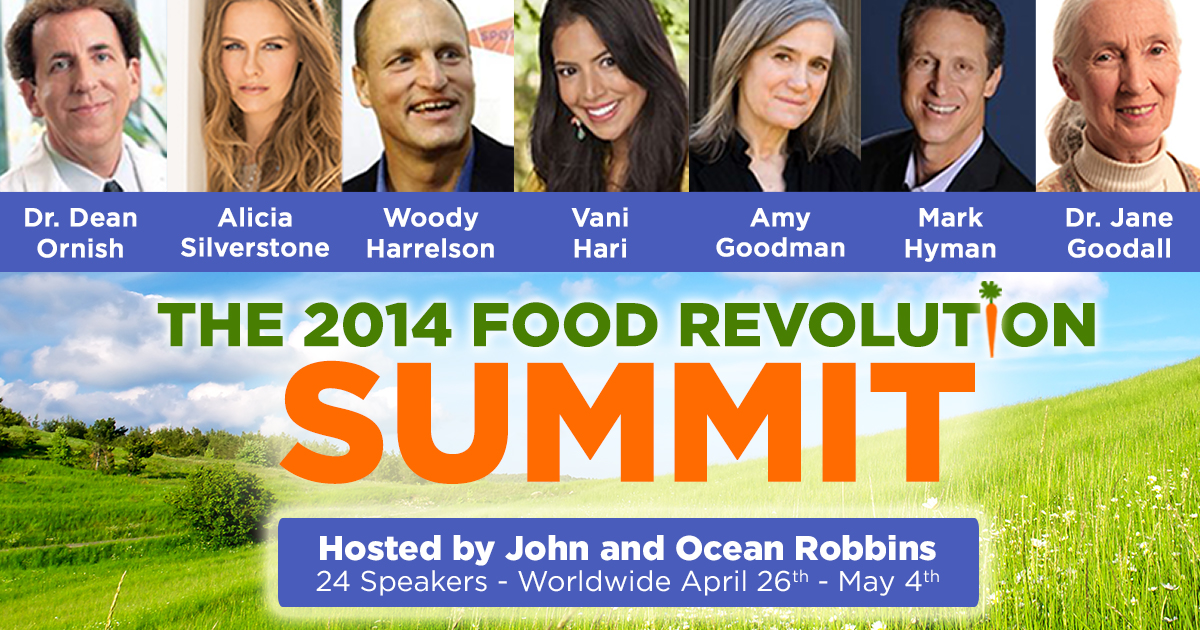 Let’s face it, we have a toxic food culture. Big companies are trying to contaminate your food with pesticides, hormones, GMOs and chemicals. They want to sell you a bunch of sugary junk, and their balance sheets don’t care if you wind up sick or obese so long as their profits are rising.

The United States now spends more than 18 percent of GDP on health care, but levels of obesity, diabetes and chronic illness are higher than ever.

Perhaps because so many people are suffering, beneath the surface, a revolution has been building.

From rural farms to urban dinner plates, from grocery store shelves to state ballot boxes, more and more people are finding their voices and taking action. If you believe in taking responsibility for your health, if you believe there is an important link between the quality of the food you eat and the quality of your life, you are part of this movement.

In the seven years after my dad and colleague, John Robbins, released the first edition of his landmark bestseller Diet for a New America in 1987, beef consumption in the United States dropped by 19 percent. The National Cattlemen’s Association, not pleased, pointedly blamed Diet For A New America. Since then, beef consumption has continued to slowly drop, while organic food sales have increased over 26-fold, to now exceed four percent of market share.

On April 26, my dad and I are launching the Food Revolution Summit. We’re interviewing 24 of the world’s top leaders in movements for healthy, sustainable, humane and conscious food for all. You can get cutting edge insights from renowned leaders like JJ Virgin, Dr. Mark Hyman, Dr. Jane Goodall, Dr. Dean Ornish, Vani Hari, and many more.  (Click here for more info.)

This summit couldn’t come at a more opportune time. People are taking an increasing interest in the way that the animals raised for food are treated. In fact, a poll conducted by Lake Research partners found that 94 percent of Americans agree that animals raised for food on farms deserve to be free from cruelty. Nine U.S. states have now joined the entire European Union in banning gestational crates for pigs, and Australia’s two largest supermarket chains now sell only cage-free eggs in their house brands.

The demand is growing for food that is organic, sustainable, fair trade, GMO-free, humane, and healthy. In cities around the world, we’re seeing more and more farmer’s markets (a nearly three-fold increase in the last decade), and more young people getting back into farming. Grocery stores (even big national chains) are displaying local, natural and organic foods with pride. The movements for healthy food are growing fast, and starting to become a political force.

In the last two years, voters in California and Washington put initiatives on the ballot that would have mandated the labeling of foods containing GMOs. Monsanto and their buddies in the pesticide and junk food business were forced to spend more than $60 million burying voters under an avalanche of deception in order to narrowly defeat both of these initiatives. Although they won these battle, more than seven million voters had come out in favor of the “right to know.” It was clear that the natural foods movement was becoming a political force to be reckoned with.

Now organizers in 30 other states have begun building GMO labeling campaigns, and efforts to improve treatment of animals, to make factory farms pay for the pollution they produce, and to reform the food offered in school lunches are all gaining strength.

Big agribusiness would probably like us all to sit alone in the dark, munching on highly processed, genetically engineered, chemical-laden, pesticide-contaminated pseudo-foods. But the tide of history is turning, and regardless of how much they spend attempting to maintain their hold on our food systems, more and more people are saying No to foods that lead to illness, and YES to foods that help us heal.

Want to join in?  Sign up for the Food Revolution Summit now.