Microbeads (Plastic Pellets) Are Banned in Our Cosmetics, But Not Our Food 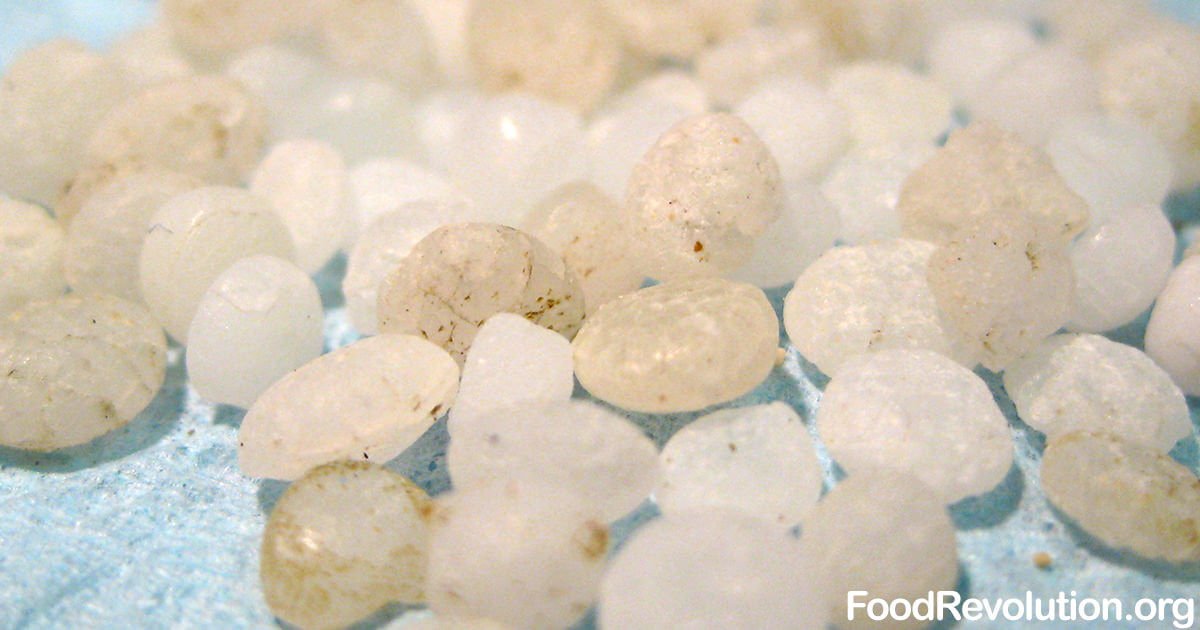 On September 3rd, 2016, The United Kingdom banned microbeads in personal care products. Thanks to the 5 Gyres Org, and partners including Whole Foods and Rainbow Light, the U.S. became the first nation to ban #microbeads on December 28, 2015. U.S. companies have until January 1, 2018 to stop selling toothpaste, face scrubs and other products in the U.S. containing microbeads. The U.K. is targeting 2017 for its ban, however it is likely that companies will have additional time to phase out their manufacturing. Thankfully there are plenty of companies that moved ahead of these bans (see below for additional information).

You can #BanTheBead now by selecting products that are free of polyethylene, polypropylene and petrolatum.

If You Don’t Want to Eat Plastic, Stop Washing With Plastic

The microbead and plastic problem is not limited to face scrubs, toothpaste and body cleansers. The new washing pods, for your clothes and your dishes, contain polyethylene and other plastic/petroleum products. Plastic bags and packaging remain the primary problem. So shifting to locally grown food from farmers and reusable canvas bags is important – so important that cities like Santa Monica, San Francisco and Seattle (and 150 other California municipalities) have banned the use of single-use plastic bags and containers.

While it might seem a pain to buy that first reusable, washable canvas bag, take your own container when you purchase strawberries or takeout, and read all of those ingredients that you have no clue about on your soaps and personal care products, once you do, that becomes the new normal ― quite easy! If you see the syllable poly, it means plastic, petro is petroleum-based, while ethylene is a petroleum derivative.

There are many natural exfoliates that can be used, including salt, lemon peel granules, cocoa bean, sea kelp and jojoba beads. Coconut oil is a wonderful skin lubricant, and more affordable than the chemical, over-the counter lotions. A popular #DIY #toothpaste is made from ½ cup of coconut oil, 2 tablespoons of baking soda and 15-20 drops of peppermint oil.

Which Brands Use Microbeads?

Colgate Palmolive phased out the use of microbeads at the end of 2014 – a year before the U.S. ban was signed into law by President Obama. Procter and Gamble has a goal to remove microbeads from their cleaners and toothpastes by 2017. According to Johnson & Johnson’s 2015 Citizenship Sustainability Report, the company plans to remove microbeads from all products globally by the end of 2017. Sadly, the list of products using microbeads is lengthy, and includes a lot of brands that advertise themselves as using natural ingredients.

BeatTheMicroBead.org has downloadable lists of products that contain microbeads. 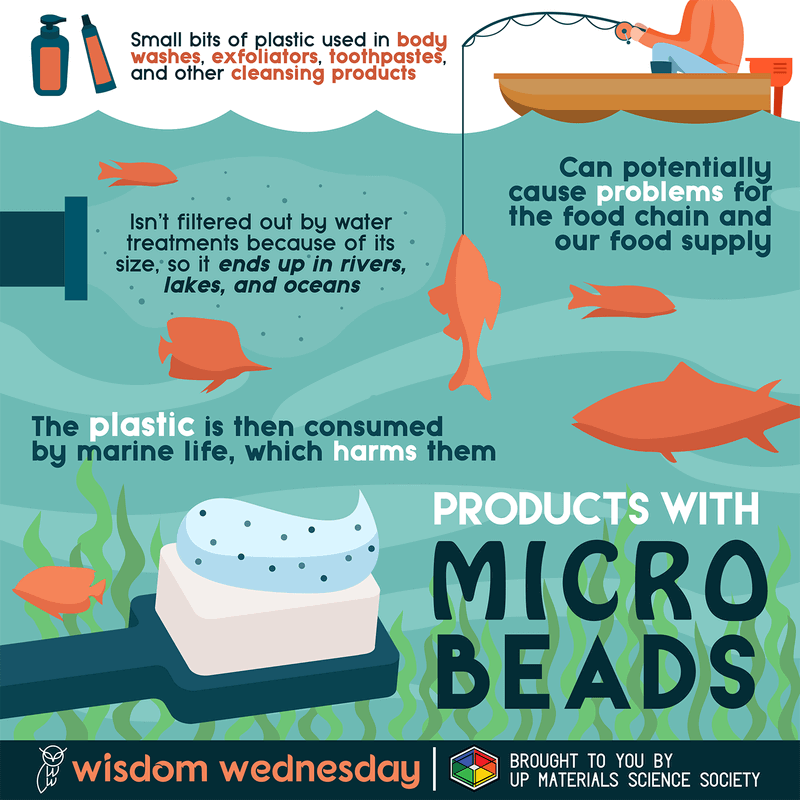 What’s All the Fuss About?

Currently, 8 million tons of plastic leak into the ocean each year (source: U.N. Environmental Programme), with a total of 150 million tons in the ocean already. If we continue escalating our use of plastics, there will be more plastic in the ocean than fish by 2050. In nine years, by 2025, the ratio will be 1:3.

Ocean animals can suffocate by swallowing plastic, but that is not the only risk at stake. According to The 5 Gyres Institute, plastic acts as a sponge for contaminants in the water, meaning that a plastic micro bead can be a million times more toxic than the water around it. When fish and seafood swallow the microbeads, they pass these toxic pills onto humans. Filter feeders, such as oysters, have pronounced exposure to plastic microbeads, with significant negative impacts on reproduction and offspring, in addition to other harmful effects on the creatures themselves (source: PNAS.org).

The U.S. Food and Drug Administration is aware of the concern, however, the research is still in its nascent stages. According to an email from an FDA spokesperson, the “FDA stays apprised of the state of science on the topic of plastics in the ocean, and will continue to evaluate scientific data.” The FDA further advised me (by email)  that the European Food Safety Authority (EFSA) has recommended that additional research be conducted on the presence of plastics and toxicokinetics in fish and seafood, and also of the local effects of toxicity on the human gastrointestinal tract.

You Are What You Eat. Do You Want to Eat Plastic? 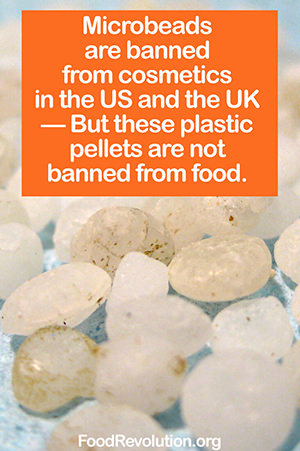 Fish and seafood are eating massive amounts of plastic, and so are humans. Microbeads and plastic are present in all seafood and fish, but for the purposes of human consumption tend to be concentrated in crustaceans and mollusks, more than fish, according to Dr. Peter Holman, of the EFSA Working Group on Contaminants in the Food Chain. Dr. Holman explains this, writing, “Fish show high concentrations, but since microplastics are mostly present in the stomach and intestines they are usually removed and consumers are not exposed to them. But in crustaceans and bivalve mollusks like oysters and mussels, you eat the digestive tract so there is some exposure there. They have also been reported in honey, beer and table salt.”

If you don’t like seafood, beer, honey or table salt, that doesn’t mean you’re safe. Polyethylene is approved for use as a “roughage replacement” for slaughter cattle, i.e. “beef production” not “milking cows,” calves or breeding cattle, according to the FDA spokesperson. Polyethylene is also FDA-approved for use in plastic bottles and microwavable plastic food packaging.

If you are concerned about BPA in your plastic, look for the resin code with a 7 in the middle. Once again, Whole Foods Market is taking a leading role in trying to eliminate BPA from contact with food. As you can see from their policy alert, this is a complicated issue that is not yet fully resolved.

The power to end the use of microbeads and single-use plastic packaging now lies in the hands of the consumer. Certainly legislation can force the issue, and is often the jolt companies and consumers require to change ingrained habits and protocol. When city-wide bans on single-use plastic carryout bags are enforced, overnight recalcitrant citizens switch to reusable canvas bags. However, as I indicated in the opening paragraph, even with a ban, companies can legally take years to end their use of these pollutants.

Nothing motivates a company to change faster than products that sit unsold on shelves.

Tell us in the comments! How will you take action to help end the use of microbeads and single-use plastics?

About the author: Natalie Pace is the co-creator of the Earth Gratitude Project and the author of the Amazon bestsellers, The Gratitude Game, The ABCs of Money and Put Your Money Where Your Heart Is. Learn more about her work on sustainability and financial literacy at http://www.nataliepace.com.