Why Does The Medical System Ignore The Importance of Diet? — A Fable Told by John Robbins 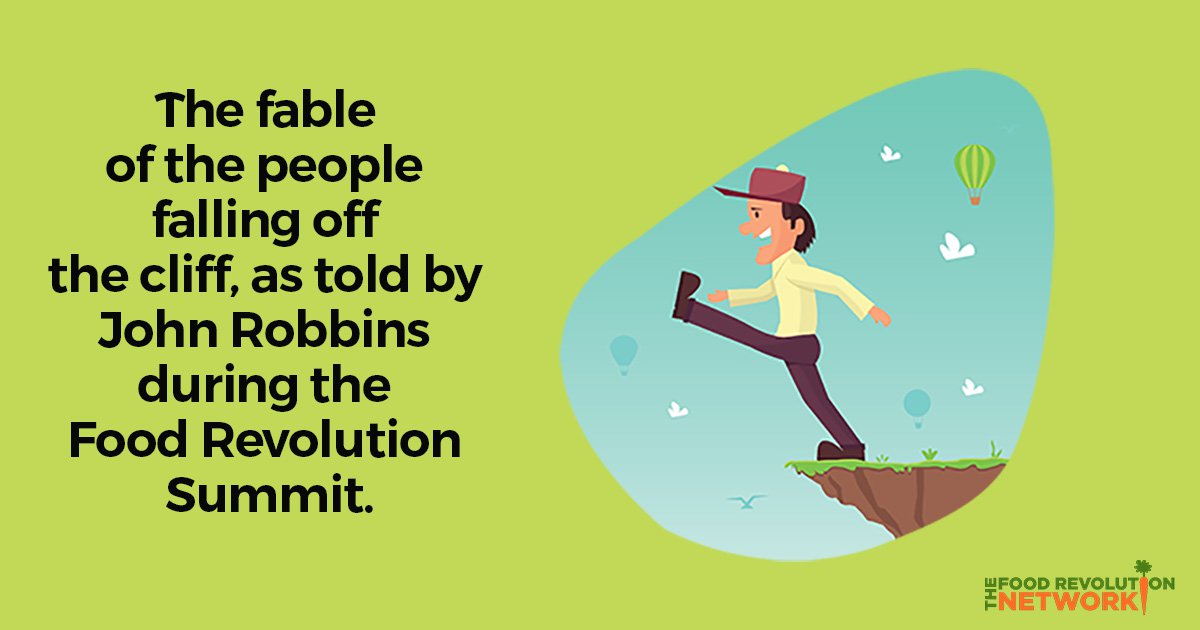 This fable was part of the 2017 Food Revolution Summit.

From Ocean Robbins: This is personal. It affects every single one of us, and it affects the people that we love the most, and it’s also global. In 2013, a global collaborative of scientists led by the Institute for Health Metrics and Evaluation at the University of Washington completed the largest study of risk factors for death and disabilities ever conducted in human history.

This means that more Americans are dying from diet-caused diseases annually than died in all the years of World War I, World War II, the Korean War, the Vietnam War, and both Iraq wars, combined. But this time the enemy isn’t another country—it’s the food we’re eating. We are basically digging our own graves with our knives and forks.

When I reflect on all this, I’m reminded of a story that I’ve heard my dad tell.

Would you be willing to share the fable about people falling off the cliff? Do you know the story I’m referring to?

John Robbins: Well, I do know the story you’re talking about, and I would be happy to tell it.

John Robbins tells the fable about people falling off the cliff

Once upon a time, there was a large and rich country where people kept falling over a steep cliff. They’d fall to the bottom and be injured, sometimes quite seriously, and many of them died. The nation’s medical establishment responded to the situation by positioning at the base of the cliff the most sophisticated and expensive ambulance fleet ever developed, which would immediately rush those who had fallen to modern hospitals that were equipped with the latest technological wizardry. No expense was too great, they said, when people’s health was at stake.

Now the idea occurred to certain people that another possibility would be to erect a fence at the top of the cliff. When they voiced the idea, however, they found themselves ignored. The medical authorities explained patiently that while building a fence might seem like an interesting idea, it was actually far from practical, and that health was too important to be left in the hands of people who were not experts. “Leave it to us,” they said, “for with enough money we will soon be able to genetically engineer people who do not bruise or become injured from such falls.”

So no fences were built, and as time passed this nation found itself spending an ever-increasing amount of its financial resources on drugs, surgeries, hospitals, and high-tech medical equipment. Money that could have gone to community services, decent housing, education and good food — not to mention building safety fences — was not available to the people, for it was being spent on medical care for people who had fallen over the cliff. As the costs of treating people kept rising, growing numbers of people could not afford medical care. There were increasing numbers of homeless, and there were ever more hungry people, and families torn apart by the stress. Violence, gangs, and inner city riots began to well up as outlets for the frustration and despair people felt.

The more people kept falling off the cliff, the more a sense of urgency and tension developed, and the more of the country’s money was poured into the heroic search for a drug that could be given to those who had fallen to cure their injuries.

When a few families who had lost loved ones tried to erect warning signs at the top of the cliff, they were arrested for trespassing. When some of the more enlightened physicians began to say that “Fences should be built,” and “Warning signs should be erected,” representatives from powerful industries denounced them as “health police.” A fierce battle ensued, and finally, after many compromises, the medical establishment did issue warnings. Anyone, they said, who had already broken both arms and both legs in previous falls should exercise utmost caution when falling.

What can be done to change the medical system?

Today, only 25% of all medical schools offer even a single required course in nutrition. Stunningly, this is lower than the 37% of medical schools that did so 30 years ago.

At the Food Revolution Network, we want to change that. We believe that every graduating physician should know about healthful eating and its role in preventing and reversing conditions like heart disease, hypertension, stroke, cancer, dementia, obesity and type 2 diabetes, and we have a plan to advance towards this goal. Stay tuned to hear more about our campaign.