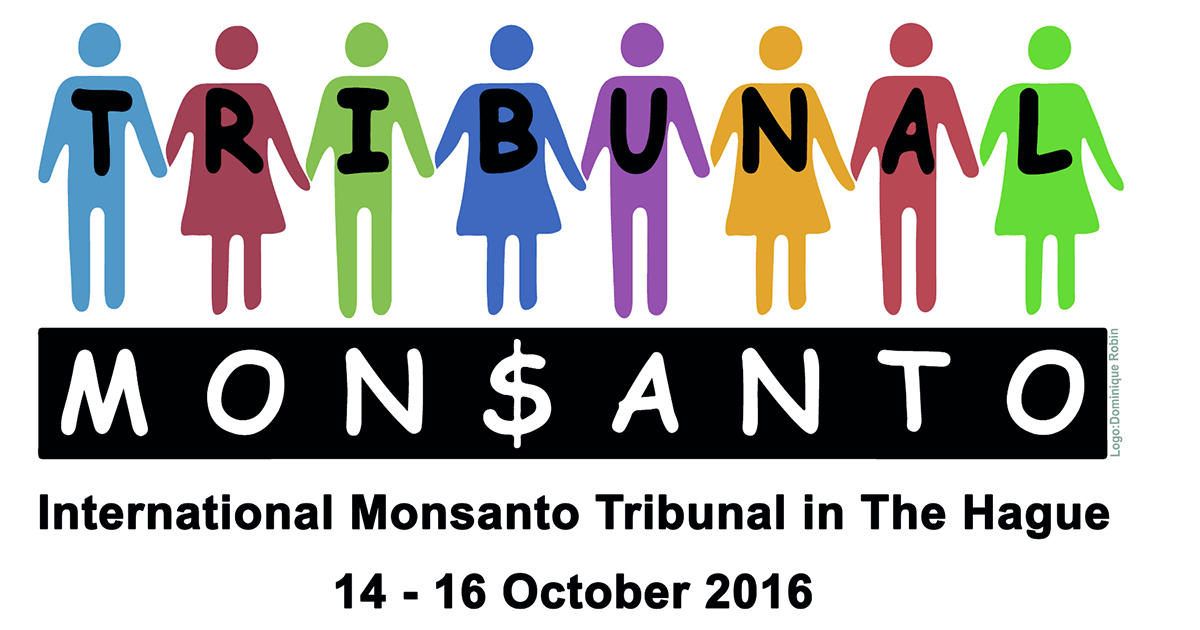 Update: You can follow live updates of the Monsanto Tribunal and People’s Assembly here: http://en.monsantotribunal.org/tribunal – http://peoplesassembly.net or on the Facebook page here: https://www.facebook.com/monsantotribunal

In the last century, Monsanto and other big agribusiness corporations have promoted and profited from chemical-intensive methods of food production that have poisoned people, destroyed biodiversity, pushed small farmers off their land, polluted the environment, and contributed to climate change. Now, citizens around the world are saying: Enough is enough.

What is the International Monsanto Tribunal?

The International Monsanto Tribunal is a public trial of Monsanto for crimes against humanity and the environment. It will take place October 14th through 16th in The Hague, Netherlands — the International City of Peace and Justice.

Five internationally renowned judges will hear from 30 witnesses and experts from 5 continents – including people who have been harmed by Monsanto’s products.

The aim of the tribunal is to provide victims and their legal counsel the arguments and legal grounds for further lawsuits against Monsanto and other agribusiness corporations on the basis of the environmental and health damages these companies have caused.

The tribunal will also show why the crime of ecocide (the destruction of the natural environment, especially when willfully done) must be recognized under international law.

Until now, world governments and courts have failed to hold Monsanto accountable for the true impact of their actions. And when charges have been brought in domestic courts, Monsanto typically spends enormous amounts of money on legal defense – or it settles out of court. We need a new approach if we are to create meaningful changes in Monsanto’s practices.

That’s why civil society organizations are coming together to hold Monsanto and other agribusiness corporations accountable.

Monsanto, the biggest force in promoting chemical-intensive industrialized agriculture over the last 20 years, has been able to monopolize our food and poison our environment. Some of the company’s most toxic products include:

Monsanto is serving as an example for the entire industrial agriculture system, which means that all companies that use practices that ignore the damage to people’s health and the environment will be put on trial.

What about the Monsanto-Bayer merger?

Bayer is attempting to acquire Monsanto for $66 billion. If the proposed merger takes place, the buyout will take 9 to 12 months to be completed, assuming it isn’t blocked.

If the merger goes through, Bayer will inherit responsibility for Monsanto’s actions and the damage they cause. This could lead to recognition of some of Monsanto’s practices and products as liabilities. The potential merger, which is opposed by many who fear a new mega-corporation having even more control over the world’s food supply, makes the Monsanto tribunal even more urgent than ever.

What can you do to help?

Throughout history, citizen’s tribunals have been an effective tool for highlighting the need to change international law so that victims of transnational companies have a means to legal redress.

But they are most successful when they draw widespread attention and are endorsed and supported by millions of citizens, throughout the world.

That’s why we invite you to take action today and add your signature to the list of people around the globe who support the Monsanto Tribunal. Go here to help increase the impact of this historical initiative by adding your voice: http://www.monsanto-tribunal.org/sign.

And then share this post with your network to help spread the word. You can use the hashtags #MonsantoTribunal and #ExposeMonsantosCrimes.

And you can take part in the Monsanto Tribunal Twitter Rally.