Golden Rice: Bringing a Superfood Down to Earth 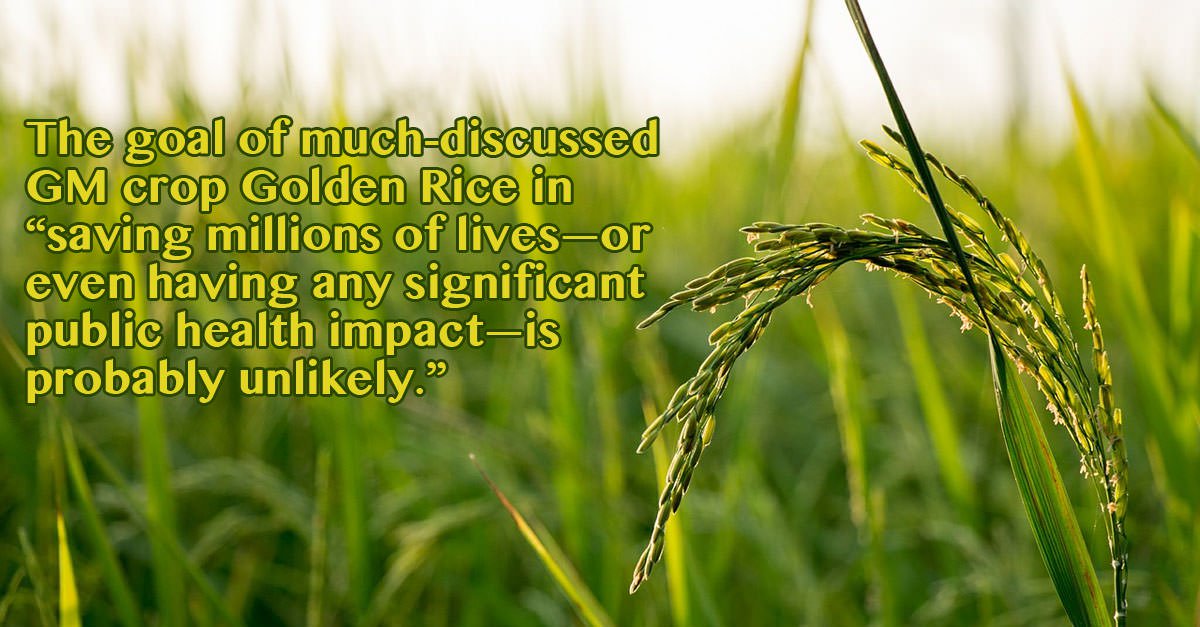 Golden Rice is modified to produce beta carotene in the endosperm, rather than only in the bran as in most rice. Beta carotene is a vitamin A precursor, and the hope was that this invention would mitigate Vitamin A Deficiency (VAD), which in extreme cases can cause blindness or death in malnourished children. After appearing on the cover as Time in 2000 as a rice that “could save a million kids a year,” Golden Rice has been a nearly ubiquitous talking point in GMO arguments. As a high-flying GM superfood, it is without peer.

But the battles over Golden Rice have been particularly heated even by the usual standards of GMO bombast. Critics see it as an unproven, expensive, and misguided bandaid—a Trojan Horse to open the floodgates of GM crops into the global south (Brooks 2010:76-83; RAFI 2000). Industry spokesmen, impassioned molecular biologists, and partisan journalists charge that children are being left blind by GMO critics having slowed the rice; hired activist Patrick Moore tirelessly (and cartoonishly) blames Greenpeace — which he claims to have founded — for “murdering” children (AllowGoldenRiceNow.org 2015).

Confusingly, other biotechnologists claim that Golden Rice is already in use and that it has “helped save many, many lives and improved the quality of life of those who eat it” (Krock 2009; also see Thomson 2002:1). These claims cause considerable discomfort to the scientists who are actually doing the Golden Rice breeding (Dubock 2014:73).

All the shouting tends to cover up a crucial issue with Golden Rice: who is it for, exactly?  Proponents usually discuss it as a vitamin tablet headed for generic underfed children in “poor countries” (Beachy 2003), or “developing countries” (Enserink 2008), or occasionally “Asia” (Dawe and Unnevehr 2007).

But here’s the problem. Golden Rice is not just a vitamin tablet headed for malnourished kids wherever they may be.  It’s not a tablet at all; it’s rice, the most widely consumed and arguably the most culturally freighted crop in the world (e.g., Ohnuki-Tierney 1993). And it is headed specifically for the Philippines. Golden Rice got its start in the Philippines (Enserink 2008), and it’s being bred and tested in a research institution in the Philippines, to be approved by the Philippine Bureau of Plant Industry, to be sold in Philippine markets to Philippine growers and potentially fed to Filipino children. (Breeders and researchers in Vietnam, India, and Bangladesh are also working with Golden Rice, but release is not on the horizon in any of these countries.)  Most discussions of Golden Rice ignore this Philippine context. Even economic analyses purporting to calculate “The Cost of Delaying Approval of Golden Rice” (Wesseler, et al. 2014) make no mention of the Philippines.

The neglect of this Philippine context is remarkable because the Philippines is hardly just a country with vitamin A-deficient children (in fact, such children are relatively scarce there). The country is unique with respect to rice, with a storied history, complicated present, and contested future for the crop. This is the country that brought us the rice half of the Green Revolution (the wheat half was developed in Mexico); the country with famous rice terraces; the country with a resurgent trade in “heirloom” landrace rice; the country with the famous International Rice Research Institute (IRRI).

And Golden Rice simply doesn’t grow well in the Philippines — not yet anyway, after years of trying. The actual rice grains on the cover of Time were not adapted to grow where underfed kids live; they were more like the plant equivalent of lab rats. For the high-flying rice to actually be farmed, it had to be brought down to the ground—literally. It had to be re-bred to grow in a country where it might have an impact. The Philippines—with the world’s premier rice research station, with a full-fledged biosafety regulatory apparatus, and a high incidence of childhood VAD at the time—was the obvious choice.

Golden Rice seeds arrived at IRRI in 2001 and began the long process of being crossed into locally-adapted varieties. By 2008, IRRI (along with the Philippine Rice Inst.) was running confined field trials of two different versions of Golden Rice bred into four rice varieties. During 2011-2013, they focused on field trials of Golden Rice bred into the Green Revolution workhorse rice called IR64 and also a popular variety called “Peñaranda” (A. Alfonso, pers comm). But as of this writing, over 14 years after IRRI began trying to bring Golden Rice down to earth in the Philippines, the best varieties still exhibit a “yield drag”—i.e., lower productivity than seeds that are identical except for the Golden Rice trait (Dubock 2014; Eisenstein 2014; IRRI 2014).

That’s right: contrary to claims that millions of children are dying because of Greenpeace’s opposition,

Golden Rice is simply not ready, and hasn’t even been submitted to regulatory authorities for approval. IRRI is quite clear about this, as a visit to their website will show. I was at IRRI last month and the word was that 3-5 more years of breeding would probably be needed.

Even if Golden Rice is brought up to speed agronomically, and even if it is approved, released, and adopted by farmers, its goal of saving millions of lives—or even having any significant public health impact—is probably unlikely. Nutrition programs have brought the incidence of childhood VAD from a peak of 40% in 2003 to 15% in 2008 (Food & Nutrition Research Inst. nd), and the incidence has almost certainly fallen more since then. Again, IRRI itself has been transparent, acknowledging on their website that VAD is being effectively reduced without Golden Rice (IRRI nd).

IRRI is also quite explicit that it will release Golden Rice only IF “it is found to be safe” and IF it is “shown to improve vitamin A status” (see their website).  It is not yet known if it will be effective in raising Vitamin A levels in underfed children.  Filipino children who still suffer from VAD have poor diets lacking in the fats that are needed to absorb Vitamin A (Dawe, et al. 2002; Haskell 2012; Nestle 2001). To date, the human feeding trials have only been conducted with well-nourished individuals. In the heavily cited (and since retracted) study by Tang, et al. (2012), children were fed balanced meals with 20% energy from fat; this  demonstrated only that Golden Rice worked in children who did not need it.

Golden Rice has soared as a high-flying superfood on magazine covers, the New York Times, industry front group websites and speeches by paid activists; the problem comes from bringing it down to earth.