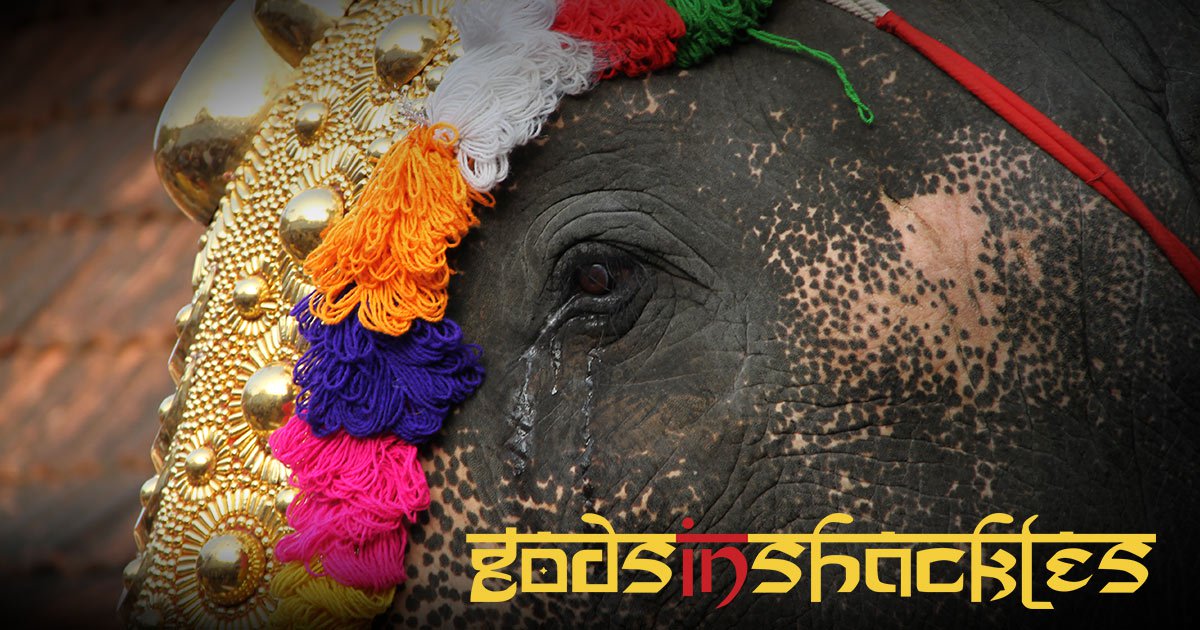 Editor’s note: If we want to live in a world where humane food is a reality, we need to strive to achieve a society where humans coexist with all sentient beings. We hope you’ll join us in learning about this important issue and spreading the word. Endangered Asian elephants are being exploited for profit in the name of culture and religion, and these gentle souls need our support. For a limited time, you can watch the documentary Gods in Shackles for free.

Their decades of painful cries for help are falling on deaf ears, as they endure barbaric torture and deprivation of their basic necessities of life. They are being captured from the wild and used in temple rituals and glamorous cultural festivals that draw thousands of tourists from around the world, oblivious to the suffering of a sentient being.

They are the endangered Asian elephants of India, the nation’s heritage animal, also considered to be the embodiment of Lord Ganesh, a Hindu God with an elephant head, who is revered and worshipped by people from all walks of life.

It is my life’s purpose to end the pain and suffering of these elephants and free them from the chains of slavery by revealing the truth using one of the most effective media. I am producing a documentary Gods in Shackles, which exposes the abhorrent torture of temple elephants and their exploitation for profit in the name of culture and religion.

And now is the time for enlightened humans to join hands, and help us end the pain and suffering of these highly social and conscious beings.

Please take a few minutes to watch our movie trailer and some of our undercover footage:

There are approximately 30,000 Asian elephants left on the planet, around 27,000 of them in India, according to the 2017 elephant census released on the World Elephant Day. Despite a ban on elephant seizure in India, these animals are being illegally captured, and “domesticated”, as the mafias manipulate the loopholes in the legal system.

We have gathered approximately 400 hours of footage, including a festival called Trissur Pooram in Kerala (a southern state of India), which sees the largest gathering of male elephants in the world. We also ventured into the temples and have filmed the deplorable conditions under which these intelligent animals are tethered, and our informant has filmed how the spirits of these amazing animals are broken in utmost secrecy.

In a country that houses 1.34 billion people, animal cruelty has become deeply ingrained in the minds of Indian people. Winning their support is crucial to ending the atrocities against temple elephants.

Gods in Shackles will lift off the cultural veil, exposing the layers of political, commercial and religious corruption, as well as the harsh realities that the elephants endure in order to entertain the masses in the name of traditions.

Mahatma Gandhi said, “The greatness of a nation and its moral progress can be judged by the way its animals are treated.”

But the irony is, on the same soil that Gandhi was born India’s heritage animal is deprived of its basic survival rights – food, water and shelter.

India has some of the most stringent laws in the world to protect elephants, but are not being enforced. The laws of the land are being flouted in broad daylight, as the authorities that create these laws are turning a blind eye due to local politics. We have gathered exclusive interviews from people who have risked their lives to voice their concerns. We have also filmed shocking undercover footage that will expose the truth about the glamorous cultural festivals.

USE OF ONLY MALE ELEPHANTS AND ITS IMPLICATIONS

According to Dr. Sukumar, loss of male elephants from the wild is already causing skewed sex ratio that currently stands at 1:50 male and females in certain areas. He said, this in turn is fueling inbreeding, genetic disorders and deadly diseases. For instance elephants are contracting herpes and tuberculosis.

The ceremonial elephants in captivity are deprived of their basic instinct to mate, further impacting the survival of a keystone species. Male elephants go through an annual cycle called musth when they are in their most dominant phase, with their testosterone and energy levels surging at nearly one hundred percent higher than normal. In the wild they release their energy by mating and fighting with other bulls. Where as in captivity they are tethered 24 hours a day, seven days a week – all four legs tightly shackled restricting even the slightest of movements, causing arthritis and other diseases. THE ABHORRENT TORTURE OF KERALA’S ELEPHANTS

Male elephants of Kerala are not only deprived of food, water and shelter as they are paraded for hours on end beneath the scorching sun on melting tar roads, but also when they display their natural male instincts, they are tortured. We have exclusive interviews with a veterinarian suggesting that mahouts (or handlers) intentionally inflict torture by throwing rocks at their enlarged and protruding penis during their musth cycle, which has resulted in the deaths of many elephants in Kerala.

Meantime, one of the most world renowned temples in India where 54 male elephants are kept in an “elephant factory farm” scenario has received the United Nations (UN) world heritage status. We have gathered evidence of elephants being brutalized and tethered directly beneath the scorching sun at 45 degrees Celsius – nothing to shelter them from the elements.

Here they are kept in the most unhygienic conditions, made to stand on their urine and excrement, causing foot rot and breeding pathogens that spread deadly diseases such as tuberculosis. The evidence we have gathered will shock the world.

Our planet is already facing its sixth mass extinction. This is further exacerbated by human-induced species depletion.

We need to save the endangered Asian elephants and stop the cultural and religious practices that are not only condoning animal cruelty, but also depleting our wildlife. If they become extinct, our children and grandchildren will be left to face the dire consequences of depleted natural treasures that we had the privilege to enjoy during our lifetime. We can prevent this from happening by ending their capture from the wild.

As conscious people, we cannot turn a blind eye to the abhorrent torture of these intelligent and highly social animals that are ripped apart from their families and deprived of their basic necessities of life. We need your help in order to ultimately push for a ban of these festivals and use of elephants in temple rituals.

Gods in Shackles will dispel the religious myths shrouding the temple authorities.

Gods in Shackles is a powerful tool to inspire the youth of Kerala. After the movie release, we will be touring schools across India to educate the youth and continue this mission with grassroots people with whom we are currently collaborating.

Gods in Shackles is a necessary tool to discourage foreigners from attending Kerala’s glamorous cultural festivals and funding the abuse of these elephants.

We invite you to become part of a global movement and help us end the barbaric cultural practices that condone elephant cruelty. We have in our hands the key to unshackle the chains of pain and suffering not only of the elephants, but also the cultural shackles that inflict unimaginable pain and suffering on all sentient beings.

Please click here to watch our movie Gods in Shackles and support a worthwhile cause. 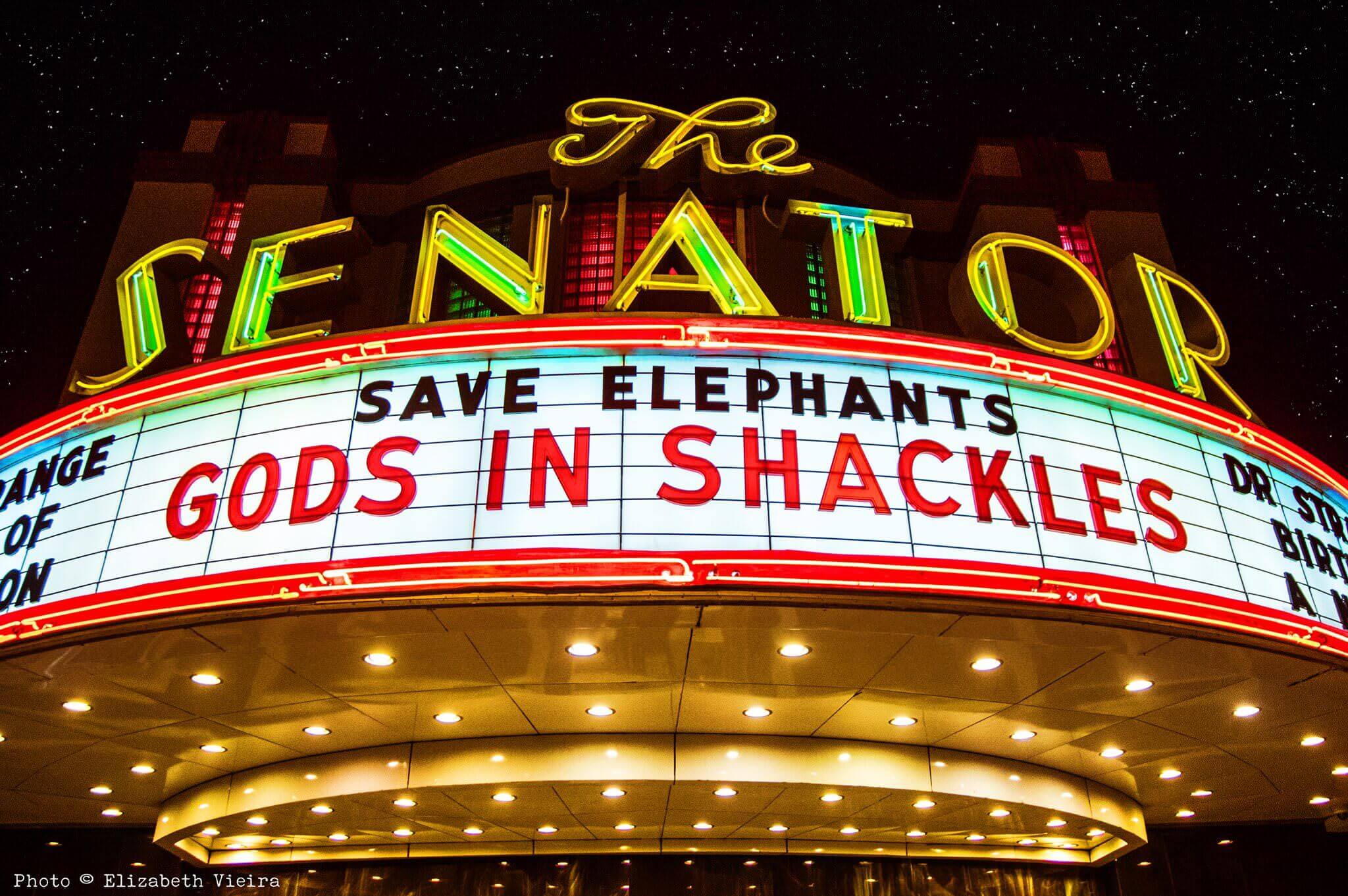