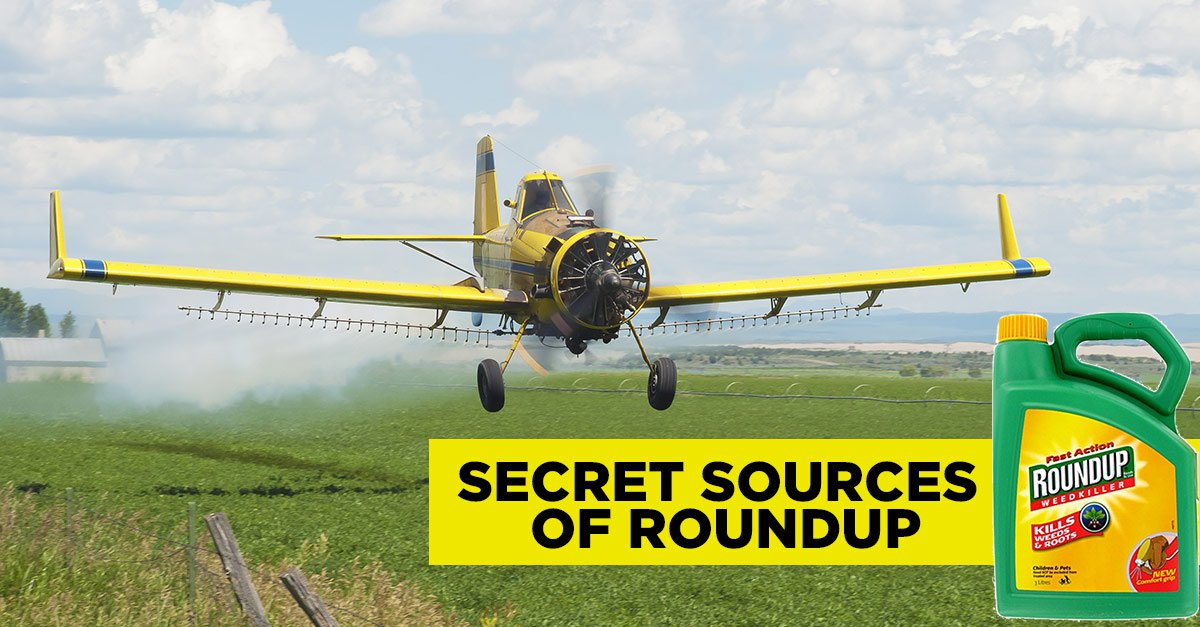 Monsanto invented the herbicide glyphosate and brought it to market under the trade name Roundup in 1974, after DDT was banned. But it wasn’t until the late 1990s that the use of Roundup surged, thanks to Monsanto’s ingenious marketing strategy. The strategy? Genetically engineer seeds to grow food crops that could tolerate high doses of Roundup. With the introduction of these new GE seeds, farmers could now easily control weeds on their corn, soy, cotton, canola, sugar beets and alfalfa crops–crops that thrived while the weeds around them were wiped out by Roundup.

Eager to sell more of its flagship herbicide, Monsanto also encouraged farmers to use Roundup as a dessicant, to dry out all of their crops so they could harvest them faster. So Roundup is now routinely sprayed directly on a host of non-GMO crops, including wheat, barley, oats, canola, flax, peas, lentils, soybeans, dry beans and sugar cane.

Between 1996 – 2011, the widespread use of Roundup Ready GMO crops increased herbicide use in the U.S. by 527 million pounds—even though Monsanto claimed its GMO crops would reduce pesticide and herbicide use.

Monsanto has falsified data on Roundup’s safety, and marketed it to parks departments and consumers as “environmentally friendly” and “biodegradable,” to encourage its use it on roadsides, playgrounds, golf courses, schoolyards, lawns and home gardens. A French court ruled those marketing claims amounted to false advertising.

In the nearly 20 years of intensifying exposure, scientists have been documenting the health consequences of Roundup and glyphosate in our food, in the water we drink, in the air we breathe and where our children play.

They’ve found that people who are sick have higher levels of glyphosate in their bodies than healthy people.

They’ve also found the following health problems which they attribute to exposure to Roundup and/or glyphosate:

Alzheimer’s disease: In the lab, Roundup causes the same type of oxidative stress and neural cell deathobserved in Alzheimer’s disease. And it affects CaMKII, an enzyme whose dysregulation has also been linked to the disease.

Anencephaly (birth defect): An investigation into neural tube defects among babies born to women living within 1,000 meters of pesticide applications showed an association for glyphosate with anencephaly, the absence of a major portion of the brain, skull and scalp that forms during embryonic development.

Autism: Glyphosate has a number of known biological effects that align with the known pathologies associated with autism. One of these parallels is the gut dysbiosis observed in autistic children and the toxicity of glyphosateto beneficial bacteria that suppress pathogenic bacteria, along with pathogenic bacteria’s high resistance to glyphosate. In addition, glyphosate’s capacity to promote aluminum accumulation in the brain may make it the principal cause of autism in the U.S.

Birth defects: Roundup and glyphosate can disrupt the Vitamin A (retinoic acid) signaling pathway, which is crucial for normal fetal development. The babies of women living within one kilometer of fields sprayed with glyphosate were more than twice as likely to have birth defects according to a study from Paraguay. Congenital defects quadrupled in the decade after Roundup Ready crops arrived in Chaco, a province in Argentina where glyphosate is used roughly eight to ten times more per acre than in the U.S. A study of one farming family in the U.S. documented elevated levels of glyphosate and birth defects in the children, including an imperforate anus, growth hormone deficiency, hypospadias (an abnormally placed urinary hole), a heart defect and a micro penis.

Brain cancer: In a study of children with brain cancer compared with healthy children, researchers found that if either parent had been exposed to Roundup during the two years before the child’s birth, the chances of the child developing brain cancer doubled.

Cancer: House-to-house surveys of 65,000 people in farming communities in Argentina where Roundup is used, known there as the fumigated towns, found cancer rates two to four times higher than the national average, with increases in breast, prostate and lung cancers. In a comparison of two villages, in the one where Roundup was sprayed, 31 percent of residents had a family member with cancer, while only 3 percent of residents in a ranching village without spraying had one. The high cancer rates among people exposed to Roundup likely stem from glyphosate’s known capacity to induce DNA damage, which has been demonstrated in numerous lab tests.

Celiac disease and gluten intolerance: Fish exposed to glyphosate develop digestive problems that are reminiscent of celiac disease. There are parallels between the characteristics of celiac disease and the known effects of glyphosate. These include imbalances in gut bacteria, impairment in enzymes involved with detoxifying environmental toxins, mineral deficiencies and amino acid depletion.

Chronic kidney disease: Increases in the use of glyphosate may explain the recent surge in kidney failure among agricultural workers in Central America, Sri Lanka and India. Scientists have concluded, “Although glyphosate alone does not cause an epidemic of chronic kidney disease, it seems to have acquired the ability to destroy the renal tissues of thousands of farmers when it forms complexes with [hard water] and nephrotoxic metals.”

Depression: Glyphosate disrupts chemical processes that impact the production of serotonin, an important neurotransmitter that regulates mood, appetite and sleep. Serotonin impairment has been linked to depression.

Hypothyroidism: House-to-house surveys of 65,000 people in farming communities in Argentina where Roundup is used, known there as the fumigated towns, found higher rates of hypothyroidism.

Inflammatory Bowl Disease (“Leaky Gut Syndrome”): Glyphosate can induce severe tryptophan deficiency, which can lead to an extreme inflammatory bowel disease that severely impairs the ability to absorb nutrients through the gut, due to inflammation, bleeding and diarrhea.

Liver disease: Very low doses of Roundup can disrupt human liver cell function, according to a 2009 studypublished in Toxicology.

Lou Gehrig’s Disease (ALS): Sulfate deficiency in the brain has been associated with Amyotrophic Lateral Sclerosis (ALS). Glyphosate disrupts sulfate transport from the gut to the liver, and may lead over time to severe sulfate deficiency throughout all the tissues, including the brain.

Multiple Sclerosis (MS): An increased incidence of inflammatory bowel disease (IBS) has been found in association with MS. Glyphosate may be a causal factor. The hypothesis is that glyphosate-induced IBS causes gut bacteria to leak into the vasculature, triggering an immune reaction and consequently an autoimmune disorder resulting in destruction of the myelin sheath.

Non-Hodgkin lymphoma: A systematic review and a series of meta-analyses of nearly three decades worth of epidemiologic research on the relationship between non-Hodgkin lymphoma (NHL) and occupational exposure to agricultural pesticides found that B cell lymphoma was positively associated with glyphosate.

Parkinson’s disease: The brain-damaging effects of herbicides have been recognized as the main environmental factor associated with neurodegenerative disorders, including Parkinson’s disease. The onset of Parkinson’s following exposure to glyphosate has been well documented and lab studies show that glyphosate induces the cell death characteristic of the disease.

Obesity: An experiment involving the transfer of a strain of endotoxin-producing bacteria from the gut of an obese human to the guts of mice caused the mice to become obese. Since glyphosate induces a shift in gut bacteria towards endotoxin-producers, glyphosate exposure may contribute to obesity in this way.