Infographic: The Enormous Damage Palm Oil Causes to the Environment and Animals 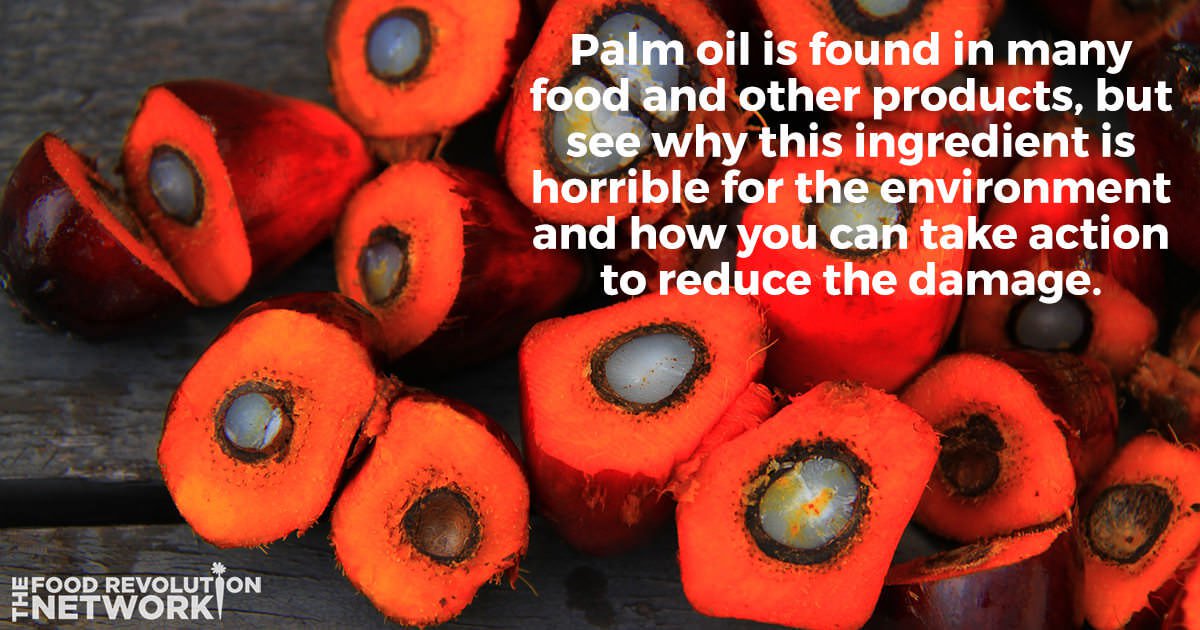 How a Popular Product Leads to Deforestation

Your favorite pizza dough, detergent, lipstick, chocolate, and biodiesel have something in common: Most of these products contain palm oil.

Palm oil comes from the fruit on tropical oil palm trees. Producing the edible oil wreaks havoc on the environment, leading to deforestation, habitat degradation, and loss of animal habitat. The World Wildlife Fund estimates that an area about the size of 300 football fields is cleared each hour in tropical rainforests for palm oil production.

The History of Palm Oil

Palm oil trees grow well in tropical climates with lots of heat and rainfall, including countries in Africa, Asia, North and South America. Worldwide, 50 million tons of palm oil are produced every year, making it the most widely traded vegetable oil in the world. The majority of the edible oil is produced in Malaysia and Indonesia.

Palm oil is popular because it is cheap to produce and can be used in a number of different applications. It has a high melting point and no trans fats, making it a popular cooking oil. Despite being an oil, it is semi-solid at room temperature. Thanks to its high fat content, palm oil is also used in non-food products that are designed to moisturize, such as shampoo, lipstick, and moisturizer.

The other reason palm oil dominates the marketplace is that there are few viable alternatives.

Environmental organizations like Greenpeace and World Wildlife Fund have admitted that finding an alternative crop is not a practical solution and instead advocate for industry reforms. In the meantime, palm oil production is laying waste to the environment.

A 2016 Greenpeace report found that in Indonesia alone, palm oil has led to the loss of 31 million hectares of forest (more than 76 million acres), an area equivalent to the entire country of Germany.

To build palm oil plantations, producers clear trees in tropical rainforests, destroying the biodiverse regions. Deforestation is a significant contributor to climate change; when the forests are lost, carbon is released into the atmosphere, causing global warming.

In Indonesia and Malaysia, much of the land is on tropical peat soil. This rich soil sequesters carbon. Clearing the land releases that carbon into the atmosphere, which contributes to climate change.

Animals living in the biodiverse regions where palm oil is produced are at risk.

Deforestation causes animals to lose their homes. During the production process, animals are often injured or killed. Orangutans and Sumatran tigers are at risk of extinction and several others species, including the Sumatran rhinoceros, sun bear, and clouded leopard, are also suffering because of palm oil production.

Cutting down forests also puts animals at risk of poaching. The World Wildlife Federation reports that the roads built to provide access to vehicles and equipment also provide access for poachers who kill mother orangutans and sell their babies on the illegal wildlife market. Some are sold as pets and others are used in wildlife tourism parks. Animals that wander into villages while fleeing the destruction are often killed.

You can also look for products made with sustainable palm oil.

In 2008, the Roundtable on Sustainable Palm Oil developed a certification for sustainable palm oil. To date, 68 growers and 281 palm oil mills producing 11.37 million tons of palm oil have been RSPO-certified.

The criteria require that palm oil does not come from fragile ecosystems or forests containing significant concentrations of biodiversity, including endangered species. Production must not impact forests where local communities depend on the forest to meet their basic or cultural needs.

To qualify for certification, producers must show minimal use of pesticides and fires, fair treatment of workers, and fulfill a requirement to consult with local communities before the development of new plantations on their land.

Palm oil is a versatile ingredient in myriad products, but as this article has shown, the bad outweighs the good. Shop intelligently and avoid products that contain palm oil, or shop only for certified sustainable palm oil from now on.