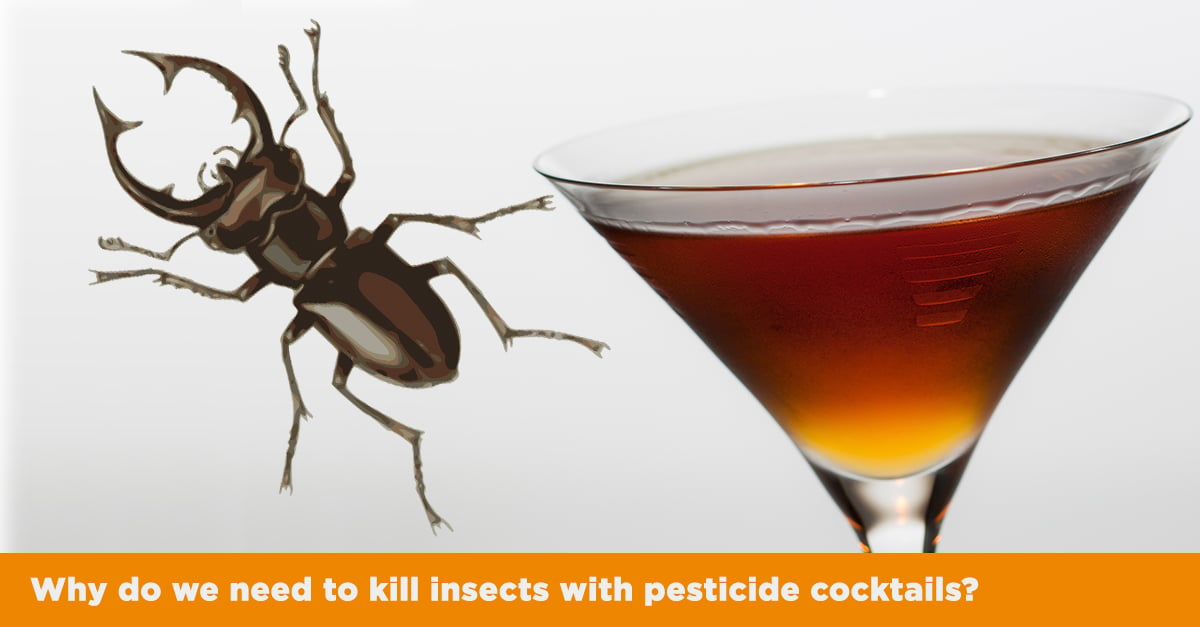 Why do we need to kill insects with pesticide cocktails?

“A substance used to kill insects”

Well, the human population on Earth has grown in recent times. About 10,000 years ago (Stone Age) there were roughly five to 50 million humans. By AD 1, there were about 200 million, and this doubled to 400 million over the next 500 years. What an alarming growth rate!

But wait. Over the last 500 years, the world population has doubled every 125 years. Today the population is 7.2 billion and growing by 77 million every year.

It’s not just the size of the population, but also the size of the individual. Humans are much taller (and wider!) than they used to be. Such a huge appetite requires matching food reserves. With increasing demand comes the need to use more and more of the planet for food production, and this need also competes with our need to grow biofuels that move us – and food – around the planet.

The globalization of our food supply generates a strong competitive environment, forcing down food prices. Surviving in this economic climate requires us to reduce costs. Consequently, an intensification of land use is required. Therefore, insects aren’t allowed to feast on our reserves and are re-classified as “pests.” Similarly, native plants invade our crop areas, becoming “weeds.”

We now defend crops from all these pests to protect both our food supply and profit margins. In 2012, for instance, the United Kingdom used 17,303,251 kg of about 300 different pesticides to target insect pests, weeds, fungi, slugs, and snails. Unfortunately, many are used as a precaution. In other words, they are used “just in case.” But is this practice safe?

How about the mixtures that are used in our communities, schools, homes, offices, hospitals, schools, parks, and lawns? The problem is that there is no magic bullet, and crop protection agents are unable to specifically target the pest and not the innocent – even beneficial – bystander insects; in other words, there is collateral damage in the war against “bad bugs”! To ensure victory, many fields are treated on several occasions, and to maintain cost efficiency, multiple pesticides are applied together, potentially creating lethal cocktails.

Individual pesticide safety is determined by toxicity over short periods of time, but this does not identify possible chronic toxicity. Such an approach would, for instance, miss the risks of cigarette smoking, which does not kill acutely (after a single cigarette), but can kill after long-term exposure. In addition to this long-term risk, could two or more pesticides create new risks that can’t be predicted?

For those using multiple medications, there is a risk of adverse reactions and, in fact, “polypharmacy” is a growing concern in medicine. While we are aware of the possible negative effects on patients when combining multiple chemicals and pharmaceutical drugs, healthy human beings exposed to multiple pesticides run similar risks.

How about the dangers of these chemical cocktails on our honeybees, bumblebees, partridges, and voles? Just imagine what we could learn if that information were available. In addition to identifying risks, we could learn how effective the chemicals are in the protection of crops (Read: saving farmers money).

In Europe, there’s an EU regulation (EC No. 1107/2009) that dictates that all European farmers are legally obliged to keep records of the pesticides they use. Tracking pesticide use at the local level can alert scientists to unpredictable dangers caused by pesticide cocktails. Sadly, the U.K. government does not collect this information. Instead this valuable data languishes on the tables of farmhouses across the United Kingdom.

Is there nothing we can do if the government does not value the power of this information? Yes, there is. If you care about the health of your family, your bees, or your environment, why not contact your local Members of Parliament in the U.K. or representative and senator in the United States and demand information on the local use of pesticides be made available to scientists so we can learn from our past mistakes and restrict our use of pesticides.

Editor’s Note: According to Beyond Pesticides, some scientists have argued for years that toxic exposures to pesticides should be measured as they would normally occur, in combination with one another: “The burden must shift to those who want to use pesticides to show that basic questions of health protection have been answered. Pointing to a pesticide label or citing an Environmental Protection Agency pesticide product registration is no assurance of safety.”

In the United States, the laws simply do not require testing, which is ultimately essential in determining the safety of daily pesticide use. Synergistic effects between multiple pesticides and other chemicals represent one of the greatest gaps in EPA’s ability to protect the public from the adverse health effects associated with pesticide use and exposure, states Beyond Pesticides. Overall this deficiency in data and the difficulty associated with its collection calls for a review on national policy surrounding pesticides and the adoption of the precautionary principle, which seeks to avoid pesticide use in favor of alternatives.