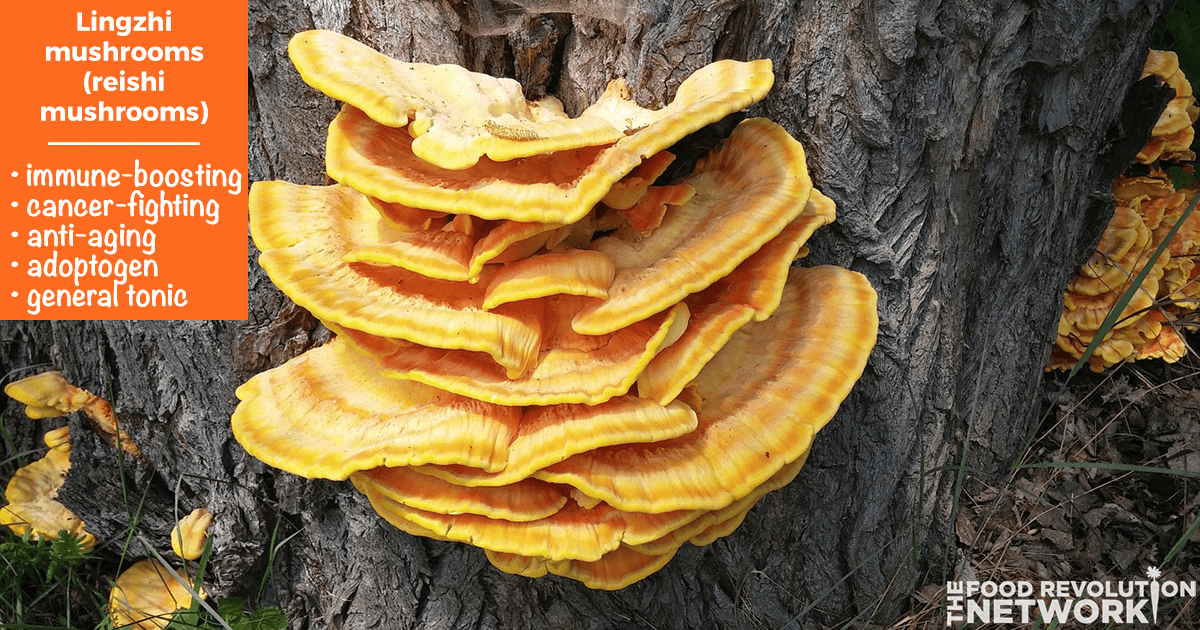 For years, I have wanted to include something from Chinese Medicine into my protocol, something universal and not needing a Chinese herbalist to prescribe it. Finally, I have found the perfect answer. Lingzhi mushrooms has literally hundreds of unique bio-active compounds that have life extending[1] properties,[2] stimulates brain neurons,[3] searches out and destroys cancer cells[4] and prevents the development of new fat cells in obese individuals.[5] In terms of life span extension it has been shown to increase life in studies by 9% to more than 20% in animal studies.

Ganoderma lucidum, an oriental fungus, has a long history of use for promoting health and longevity in China, Japan, and other Asian countries. It is a large, dark mushroom with a glossy exterior and a woody texture. The Latin word lucidus means “shiny” or “brilliant” and refers to the varnished appearance of the surface of the mushroom. The iconic mushroom commonly known as Reishi (in Japanese) or Ling Zhi (靈芝 in Chinese) is probably the most respected medicinal mushroom in Asia.

While mushrooms such as shitake, maitake, and cordyceps, all share similar immune boosting properties, Red Reishi has also the longest history and has been known to be effective in the treatment of the widest range of health conditions. Unlike other mushrooms, only Lingzhi has many important compounds such as triterpenes (ganoderic acid) that gives them a unique characteristic of being bitter in taste.

Use of Lingzhi mushrooms as a medicine goes as far back as the Han Dynasty’s “Materia Medica” or Ben Cao Gang Mu (the earliest herbal pharmacopoeia text known, written around 1590 AD). No other plant is better at finding, decomposing and flushing out subpar cellular matter throughout the body, which then allows the surrounding organ and blood system to function at a higher level. Lingzhi is loaded with terpenes. It makes sense that one of its innate abilities is to do a similar breaking-down and dissipating action in the body.

Because of its rich history and long tradition of medicinal use, Ganoderma lucidum is now one of the few mushroom species whose DNA has been fully sequenced (16,113 genes). Paul Stamets, author of Growing Gourmet & Medicinal Mushrooms and educator of mushroom cultivators world-wide says, “Reishi is remarkable for its diversity of genes coding for cytochrome P450 enzymes. These enzymes not only afford this species a broad arsenal for producing secondary metabolites for digesting nutrients, but may also confer benefits to human health such as enhancing the degradation of toxins and free radicals and increasing the liver’s metabolic efficiency. The variety of these enzymes, among more than 400 active constituents that have been found, indicates to me that mushrooms such as Reishi are like miniature pharmaceutical factories that can produce hundreds of medicinally-interactive compounds.”

Out of the functional compounds found thus far in Lingzhi, the largest group is terpenes, of which triterpenes are a derivative. You know that aroma from pine trees? From clove? Or anise, oregano, menthol, cinnamon, and citrus? That largely comes from terpenes (more commonly referred to as essential oils). Terpenes are considered the strongest anti-inflammatory and anti-tumor compounds found in nature. Numerous triterpenoids have been shown to possess rapid acetylcholine action, our brain’s main neurotransmitter. Oral administration of Lingzhi show triterpenes appearing in blood plasma in high quantities in under 20 minutes from ingestion.

Aside from this speed and breadth of effect, the more fascinating property of all terpenes is their ability to dissolve, dissipate, and decompose cellular matter. One of the first terpenes ever extracted (12th century, by Arnaud de Villanosa) from nature was turpentine—yes, the paint thinner, which is natural.

For those looking for an ultra-low cost solution to part of what Lingzhi mushrooms can do know that turpentine has what we would expect from terpenes. Turpentine and petroleum distillates similar to kerosene have been used medicinally since ancient times and are still being used as folk remedies up to the present. They were used in ancient Babylon to treat stomach problems, inflammations and ulcers.

Dimethyl sulfoxide (DMSO), an organic sulfur compound that was used only as an industrial solvent, is also known for its positive health effects. (Look soon for an essay on the importance and use of biological solvents in medicine.) It is also important to know that marijuana is loaded with terpenes and that is one of the reasons it makes such a good natural chemotherapy agent.

In some ways, similar to medical marijuana (which has regulatory effects of the nervous system) adaptogens are substances that work by adjusting altered body conditions back to normal, resulting in stabilization of cellular and psychological homeostasis. The traditional herbal texts, as well as these recent scientific studies, report that Lingzhi works both for insomnia and increasing mental clarity—two seemingly opposing problems. It’s also been found to work for both for high and low blood pressure symptoms; both over-active and under-active thyroids; both overactive immunity (Lupus, Fibromyalgia and other autoimmune diseases), and weak immunity (colds, flu, and viruses).

To a western approach, these health issues are seen as polar opposites, and medically treated as such. To any natural healing model, such as acupuncture, these are seen more as conditions of deficiency or excess. This is where the adaptogenic concept applied to certain herbs and plants works well, because their main end effect is homeostasis and balance.

Lingzhi fits the classic definition of an adaptogen. It has double-direction activity, meaning that it, as an example, improves functioning of the immune and organ systems, whether they are deficient or excessive. It doesn’t stimulate the liver, the kidney, the overall system. Rather, it regulates them. It doesn’t stimulate or suppress the immune system—it’s called an immuno-modulator. Lingzhi’s wide ability to repair the function of one person’s liver, while increasing the function of another’s lungs, or kidneys, or skin, or mental function, seems less odd once we view it from the adaptogen angle.

In Chinese, the name lingzhi represents a combination of spiritual potency and essence of immortality, and is regarded as the “herb of spiritual potency,” symbolizing success, well-being, divine power, and longevity. Among cultivated mushrooms, G. lucidum is unique in that its pharmaceutical rather than nutritional value is paramount.