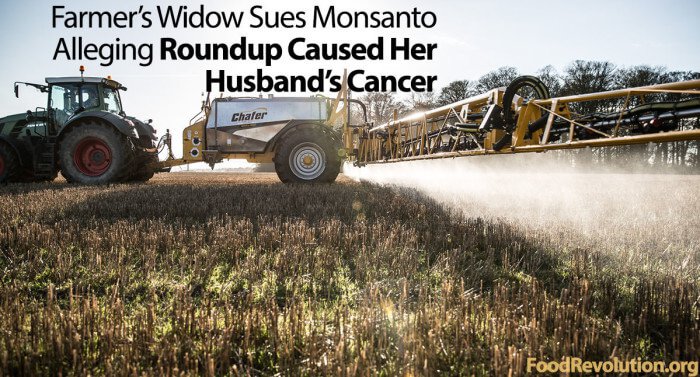 Now, Teri has filed a wrongful death lawsuit against Monsanto Co., alleging that Monsanto had known for years that exposure to glyphosate—the main ingredient in the agribusiness giant’s flagship weedkiller Roundup—could cause cancer and other serious illnesses or injuries.

A growing body of evidence is accumulating, which indicates that Jack’s death might, indeed, be linked to his exposure to glyphosate.

Glyphosate, which is the most widely applied pesticide worldwide, was declared as “probably carcinogenic to humans” in March of 2015 by the World Health Organization’s International Agency for Research on Cancer (IARC).

Besides the “convincing evidence” the herbicide can cause cancer in lab animals, the IARC also found:

“Case-control studies of occupational exposure in the U.S.A., Canada, and Sweden reported increased risk for non-Hodgkin lymphoma that persisted after adjustments to other pesticides.”

The evidence linking glyphosate to cancer is continuing to mount.

California’s Environmental Protection Agency issued plans in September of 2015 to add glyphosate to the state’s list of chemicals known to cause cancer — making it the first state in the U.S to do so.

And then, just weeks ago, a team of 94 scientists co-authored a report, published in the peer-reviewed Journal of Epidemiology and Community Health, which stated:

“The most appropriate and scientifically based evaluation of the cancers reported in humans and laboratory animals as well as supportive mechanistic data is that glyphosate is a probable human carcinogen.”

Glyphosate is applied to 89% of U.S. corn crop and 94% of the soybeans, as well as being used with dozens of other crops. Since the herbicide (and the genetically engineered crops that were created to withstand its use) is a core component of today’s industrial farm landscape, the results of this debate will have far reaching consequences.

The United States now uses about 280 million pounds of glyphosate per year, compared to only about 30 million pounds a year before genetically engineered crops were first commercialized 20 years ago.

Thanks to genetic engineering, we’re now literally spraying our food crops with a pesticide that, increasing numbers of scientists believe, is causing cancer.

The truth is that Jack and Teri McCall are just the tip of the iceberg. How many farmers and consumers, are being exposed to glyphosate on a daily basis? And what is real the impact of 280 million pounds of a probable carcinogen being sprayed on our croplands?

Monsanto and its spokespeople insist that glyphosate is completely safe. Some have even said you can drink it. Although, as this hilarious video illustrates, they may not actually mean it.

If you want to avoid eating glyphosate, the top thing you can do is to choose organically grown foods. And when you avoid GMOs, you’re also making a big difference.

Monsanto is facing a growing body of scientific evidence that its herbicide may be killing people. The handwriting seems to be on the wall.

And a widow from California just stepped to the front lines of the struggle.