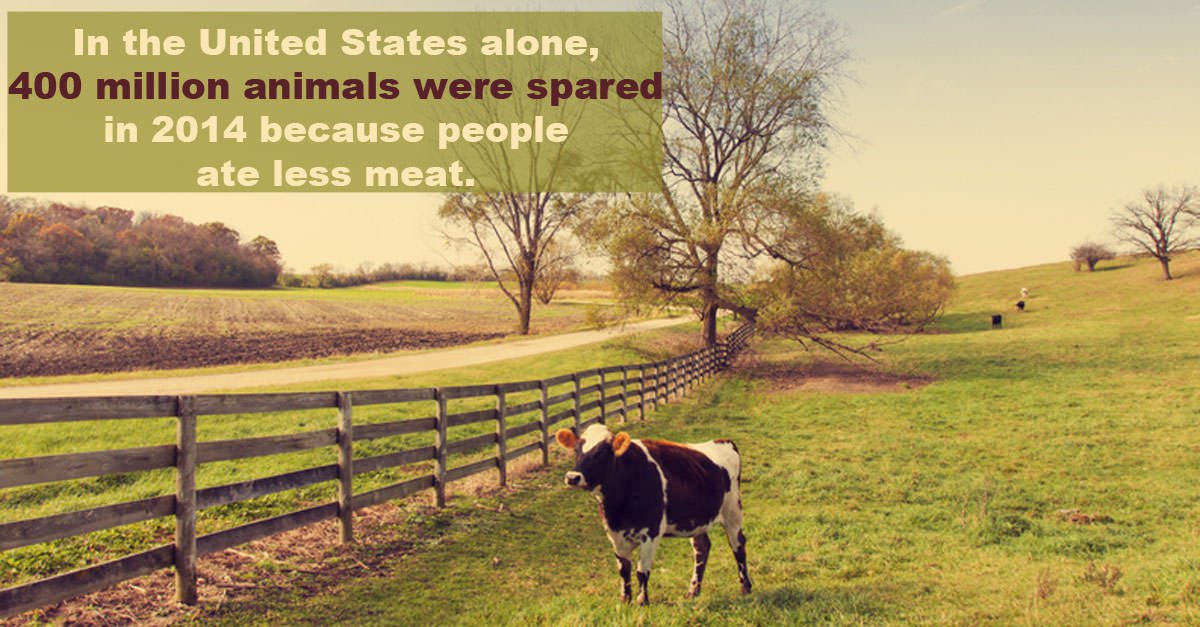 Whether it’s Meatless Monday, Weekday Vegetarianism or simply cutting down meat consumption – people from developed countries are eating less meat, and it’s already making a difference. Even though some argue that cutting-back-consumption campaigns don’t push enough of a paradigm-shift, we’re already seeing the changes: 400 million animals were spared in the US alone in 2014 because people ate less meat.

Some 93 percent of people still eat meat and it’s difficult to imagine a future where most people won’t, but a world that eats less meat is already on the right way. According to a new report, meat consumption has been steadily declining in the U.S.—by 10% per capita since 2007. In 2014, the U.S. raised and killed 9.5 billion land animals for food, but 400 million (almost 4%) were saved simply because people skipped a few meaty meals.

“What that means is that compared to 2007, last year almost half a billion fewer animals were subjected to the torment of factory farming and industrial slaughter plants–and that’s despite the increase in the U.S. population,” Shapiro explains.

Things are starting to change in the US when it comes to meat – and the same trend can be noticed in most of the developed world. In 2012, the average American consumed 71.2 pounds of red meat (beef, veal, pork, and lamb) and 54.1 pounds of poultry (chicken and turkey), according to the U.S. Department of Agriculture, and that number has went down significantly.

It’s worth noticing that on the other hand, developing countries are generally increasing their meat consumption so that on a global level, meat consumption has actually grown by a small margin – but this takes nothing away from the people who actually made a difference and consumed less meat; and as more and more countries go through this cycle, they too will ultimately reduce their consumption.

So why is this a good thing? Aside for the ethical reason of saving the animals themselves why is eating less meat a good thing?

Why eating less meat is good for you:

Why eating less meat is good for the planet: