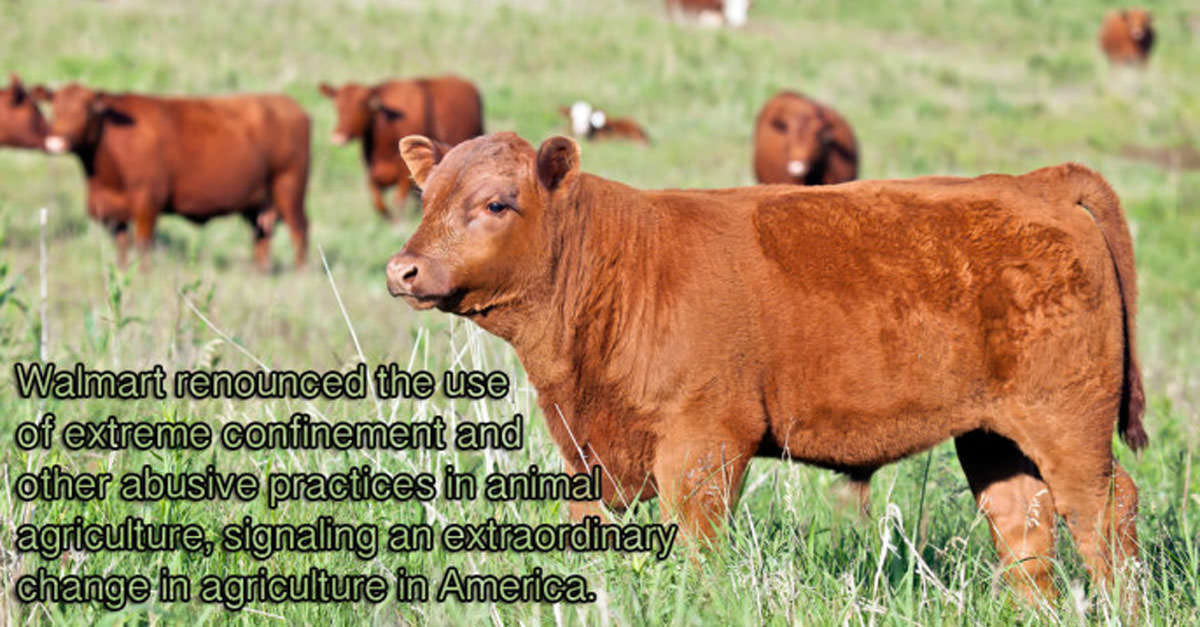 On May 22, Walmart, one of the world’s biggest companies – and the nation’s biggest food seller by a long shot – announced it has adopted the “five freedoms” principles for farm animals, effectively renouncing the use of extreme confinement and other abusive practices in animal agriculture, and signaling an extraordinary change in agriculture in America. Precisely because it’s Walmart, this is the most definitive statement yet that the era of confining farm animals in cages will come to an end. We applaud the company for adopting a comprehensive animal welfare policy, which comes on the heels of dozens of other declarations and pledges from other major food retailers against gestation crates, battery cages, and tail docking of dairy cows.

Walmart is calling on its suppliers to, among other actions, work toward ensuring that animals: 1) are raised in ways that allow them to engage in natural behaviors, including having sufficient space and socialization with other members of their species, 2) be provided more comfortable living conditions, 3) are free from painful mutilations 4) be spared mental discomfort or distress, and 5) be given ready access to water and feed. These changes, so grounded in common sense, would nonetheless herald major improvements over how much of agribusiness currently treats animals.

With these principles in mind, Walmart singles out the confinement of hens in battery cages, sows in gestation crates, and calves in veal crates as practices that must end. Walmart is also working with its suppliers to address the welfare issues surrounding painful mutilations like tail docking, dehorning, castration, and to move to slaughter systems that don’t cause as much pain.

This policy applies for all of Walmart’s U.S. operations and includes its subsidiary Sam’s Club. With the company capturing a staggering 25 percent of the grocery market, there’s no greater agent of change within our country’s food system.

As Walmart says, this announcement is part of its pledge to continually improve farm animal welfare. In other words: it’s a first step—and like all first steps, there’s room for more. For example, Walmart doesn’t yet have timelines for getting animals out of cages, or for achieving its commitments on other welfare issues—something we hope to solve with the company.

Timelines aside, this announcement helps create an economy where no agribusiness company—for business reasons alone—should ever again install a new battery cage, gestation crate, or veal crate. Walmart is helping drive the transition away from immobilizing cages and other inhumane practices, and toward a more humane, more sustainable approach to production agriculture.

This is an unstoppable trend, and that was the trajectory even before Walmart made the announcement. The company’s embrace of a more ethical framework for the treatment of all farm animals serves as perhaps the most powerful catalyst for change throughout animal agriculture.

We still have a long way to go – not just working with Walmart during the implementation of this policy. There’s also convincing states to put basic standards in the law, the few corporations that have made no commitments to catch up, and consumers to eat more consciously. But May 22 will be a day long remembered – a remarkable inflection point in our movement and a marker in the demise of an industrial system of production that treats living creatures as little more than meat-, milk-, and egg-producing machines. We appreciate the relationship we’ve built with Walmart and we’re eager to lend our voice as the company continues down this journey of creating a better, more humane food system.