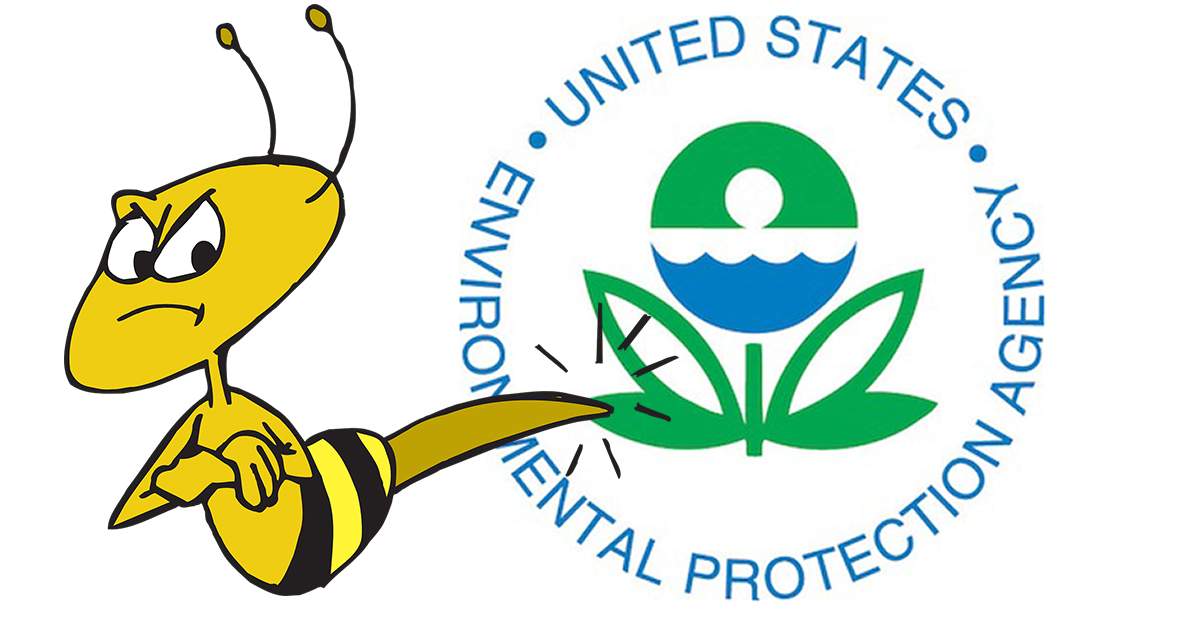 Bee colony collapse has garnered quite a bit of buzz lately. Two weeks ago, the White House released a Presidential Memorandum establishing a Pollinator Health Task Force with plans to improve pollinator health and habitat.

Many people, including the Pollinator Team at the Center for Food Safety, were pleased to see the White House acknowledge the impact of pesticides, especially neonicotinoids, or “neonics.” Acknowledgment of the problem is the first step toward recovery, but as we’ve said before, simply acknowledging these impacts will not stop current pollinator declines; we need immediate action.

We have a long way to go in dealing with the ramifications of these pernicious chemicals. As we forge ahead with new policy and regulatory initiatives, it’s important that we first understand how we got into this toxic mess in the first place.

EPA and Neonicotinoids: A Bumbling Affair

Neonics are a relatively new class of insecticides, modeled after nicotine, which at very low doses, interferes with the nervous systems of insects, causing tremors, paralysis, and eventually death. In 1994, the Environmental Protection Agency approved the first neonicotinoid chemical, imidacloprid, for limited use on ornamental plants and turf grass. In the 2000s, the EPA began approving more neonics, including thiamethoxam (2000), acetamiprid (2002), clothianidin and thiacloprid (2003), and dinotefuran (2004).

The approval of these new pesticides was contentious. In scientific assessments and early reviews dating back to 1993, EPA scientists voiced serious concerns over these chemicals’ high toxicities to honeybees, birds, and other wildlife, as well as to endangered species. Yet the EPA’s decision makers overruled the scientists and downplayed their warnings.

It is important to point out that, although the first neonicotinoid was approved for limited use in 1994, it was not until the mid- to late 2000s that these chemicals were used extensively throughout the United States. Neonics are now the most widely used insecticides in the world, with more than 500 different neonicotinoid products on the market and annual applications estimated to exceed 150 million acres nationwide.

Neonics are sprayed on a huge variety of crops, trees, and turfs, but one of their largest uses is as seed treatments on most annual field crops, such as corn, soybeans, wheat, canola, and cotton. Neonics are more persistent in soil and water than most other insecticides and have the ability to accumulate in the environment. Neonicotinoids are also very mobile and have been detected frequently in water bodies beside the agricultural areas where they are used.

Unlike alternatives such as organophosphates, which stay on the surfaces of plants, neonicotinoids are “systemic” and move into a plant’s tissue, contaminating its fruit, pollen, and nectar. Most importantly, neonics are one of the most toxic classes of chemicals to bees and will kill bees and other beneficial insects at nanogram levels.

In the mid-2000s, severe bee colony collapse started to raise serious concerns for beekeepers. Viruses and pests have always been a problem, but for decades beekeepers had been able to keep bee colony losses to 10 to 15 percent. And yet, in the early to mid-2000s – around the same time neonicotinoids gained a large share of the insecticide market – this all changed. Beekeepers began witnessing winter losses of around 33 percent and annual losses of 50 to 60 percent; indeed, affected hives began suffering all-out bee colony collapse.

Beekeepers reported bees dying right in front of their hives. Bees were also becoming disoriented, unable to navigate effectively, and disappearing from hives. The phenomenon was named Colony Collapse Disorder and Congress held hearings on it in 2007. Congress also allocated research funding to the U.S. Department of Agriculture and tasked the agency with discovering the cause of bee colony collapse.

In one of those 2007 hearings, the USDA’s Agricultural Research Service Associate Administrator Caird Rexroad testified that the USDA considered pesticides to be one of the top stressors for bees because the chemicals suppress bees’ immune systems, causing them to become more susceptible to diseases and pests. Numerous peer-reviewed studies have since established that this is irrefutably the case.

Yet, despite this testimony, the overwhelming majority of the money that Congress appropriated for addressing bee colony collapse was spent on investigating the effects of factors other than pesticides. The limited pesticide research that was conducted was not even rigorous enough to be incorporated into the EPA’s pesticide risk assessments, rendering it nearly useless.

Seven years and millions of taxpayer dollars later, government agencies have yet to identify the cause of the “mysterious” bee colony collapse scenarios playing out all over the country. They have instead shifted focus to improving bee health, citing multiple factors associated with the bee losses.

Yet independent scientific research has continued. The International Union for Conservation of Nature’s expert Task Force on Systemic Insecticides recently reviewed more than 800 peer-reviewed published journal articles from the past two decades. The scientists determined that neonics are accumulating in soils and polluting waterways and natural vegetation across the world, leading to widespread impacts on wildlife.

The Task Force also said that growing evidence indicates much of neonics’ use is unnecessary and ineffective. Due to a number of disconcerting factors surrounding the use of systemic pesticides (namely their prophylactic use, persistence, mobility, systemic properties, and chronic toxicity) the Task Force has predicted potentially devastating, even irreversible, impacts on pollinators and other beneficial species – irreversible, that is, unless we do something to save the bees.

We at the Center for Food Safety believe 100 percent that pollinators are essential to a healthy environment and food supply. Right now, the current losses are unsustainable. It is urgent that our regulatory agencies take more aggressive action to prevent further declines of pollinators and acknowledge the role that pesticides play in harming beneficial species.  The latest White House task force offers some hope of a new, more assertive direction, and not a moment too soon.