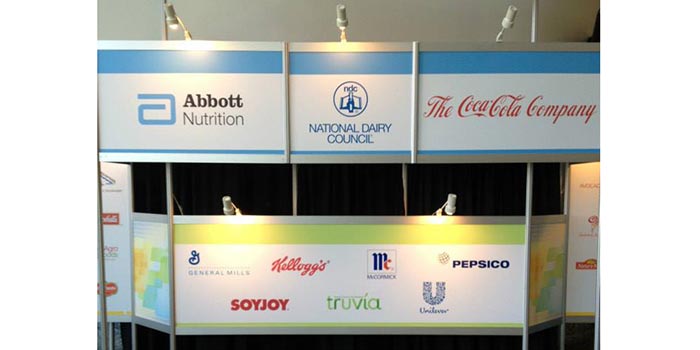 Last month, the Academy of Nutrition and Dietetics held its annual conference (The Food and Nutrition Conference & Expo, also known as FNCE) in my hometown of Houston, Texas. Rather than proudly showcase its sponsors and how they are marketing their products to our nation’s health care professionals, a photography ban was implemented for the first time in the conference’s history.

Thankfully, the ban didn’t exist until you hit the showroom floor, and a sign greeting attendees showed just exactly who was going to tell these professionals what to think about food: Coca Cola, PepsiCo and others. This conference is critical to the health of our country.  It’s where professionals go to get educated.

As we are quickly learning, food and particularly nutrition play a key role in not only promoting health but also in triggering disease.  As renowned doctors like Dr. Mark Hyman highlight, so many of the diseases and conditions that we are seeing in our loved ones are due to or exacerbated by poor nutrition. But Dietitians for Professional Integrity — an advocacy group group co-founded by dietitians that advocates for the Academy to cut its ties to its Big Food partners and sponsors — just released “The Food Ties That Bind”, a report that details the messaging Big Food shared with dietitians at 2013 FNCE. It should be enough to give anyone reason to pause and question how the financial incentives of food companies are sabotaging the health of our country. The report highlights some of the educational materials provided by the likes of Coca-Cola, PepsiCo, Kellogg’s, and General Mills at the conference, including:

Thankfully, in light of the photography ban, the report also covers a much-anticipated point-counterpoint debate planned by the Academy that was supposed to touch on the issue of partnerships between the private and public sectors, but according to the Dieticians group, instead had one speaker staunchly defend GMOs (genetically engineered ingredients, hardwired for chemicals), mock those who care about organics and sustainability, and claim that blaming Big Food and Big Ag for society’s ills was akin to blaming the Wright Brothers for the attacks of September 11, 2001.

Dietitians for Professional Integrity additionally lists its current “asks” to the Academy as they continue to engage in dialogue on this issue (including greater financial transparency and revisiting a survey by the Academy’s Hunger & Environmental Dietetic Practice group which showed that dietitians considered Coca-Cola, PepsiCo, and Mars to be “unacceptable” sponsors), and suggests ways the Academy can improve FNCE and begin to weaken Big Food’s financial grip over the annual event. While Big Food’s sponsorships obviously go a long way towards feeding their bottom lines, what we feed our families impacts more than just our health and our health care costs, it impacts our economy and the health of our country.  And as this food awakening occurs around the country, t’s time to take a look at the “education” being fed to health care professionals.

The full report can be downloaded here.

Accompanying 2013 FNCE photo gallery (an interesting assortment, as it also addresses the ban on photography and the security guards stationed to uphold it) can be found here.

She is a former financial analyst and author.