Search Join Us
Food Revolution Network
Search
Join Us
31,803 Readers
Food and Animals Food and Health Food and the Environment 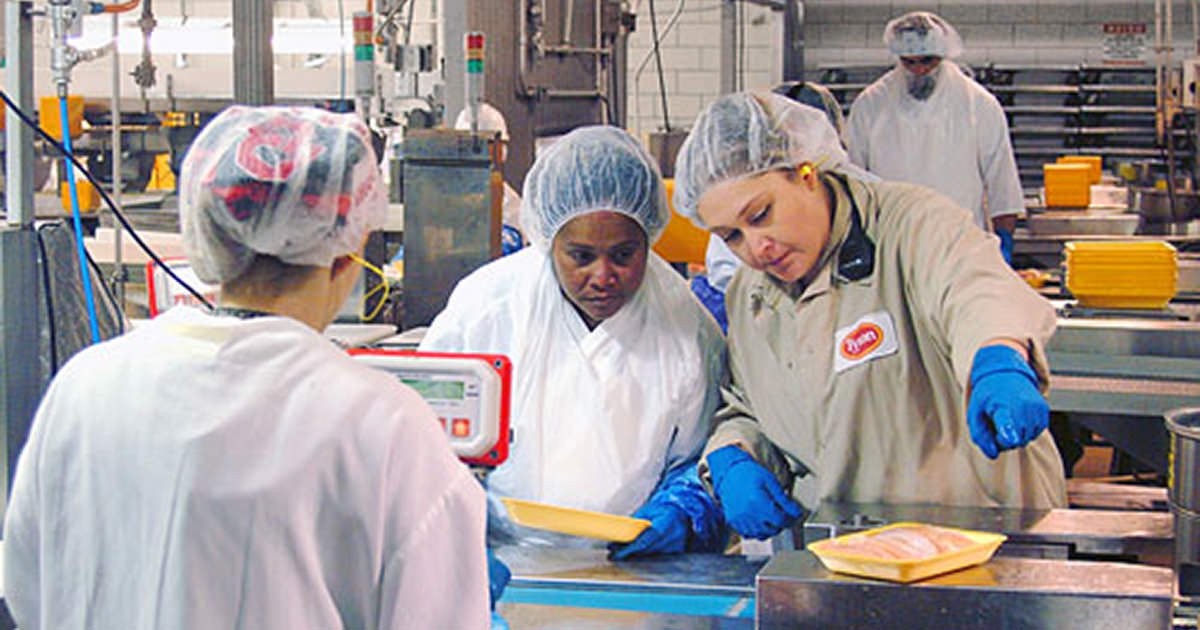 Tyson Foods, in its over 80 years of operation, has had a hugely negative impact on our food system.

Tyson Foods profits off the cheap land and cheap labor that grease the wheels of the industrial food complex, specializing in the production of packaged “food” made with Conflict Palm Oil and factory farmed meat. Tyson Foods and its global subsidiaries are one of the world’s largest producers of chicken, beef, and pork––entirely raised and processed in industrial operations.

After a shocking 12 percent drop in sales this past quarter, hurt by low sales of beef and chicken, and ironically in the wake of announcing a five percent stake in plant-based food company Beyond Meat, Tyson Foods announced on November, 21st, 2016, that it has appointed a new CEO. The news sent the meat giant’s stock tumbling almost 15 percent.

CEO Donnie Smith’s exit comes as Tyson remains under pressure from animal-rights activists over its supply chain practices and faces accusations of collusion and price fixing in a class-action lawsuit that has concerned some investors.

Unchecked corporate consolidation has driven out much of the diversity in the marketplace and food system, creating powerful agribusiness giants who control much of what ends up on our plate.

Big Ag controls over 83 percent of all foods in the U.S. marketplace, dictating much of what is available in the market. Tyson’s buyout of Snack Food 20 laggard Hillshire Brands marks one of the biggest mergers in the packaged food industry and establishes Tyson firmly in the top two companies by sales in the global processed meat market.

The palm oil industry is rife with forced and child labor.

Because Tyson Foods lacks an adequate palm oil procurement policy, it is at extreme risk of sourcing palm oil from companies that are violating the rights of workers.

Tyson Foods does not disclose its suppliers but could have ties to IOI Group, FELDA, or Kuala Lumpur Kepong (KLK) – companies that have been exposed for their exploitative labor practices.

Recent reports have exposed labor exploitation on plantations owned by palm oil giant Indofood, which is a current member of the RSPO and continues to be certified as “sustainable.” This case and others show that Tyson Foods cannot rely on this flawed certification system to ensure that it is not connected to companies that are cheating workers out of fair pay and benefits, threatening workers’ health with toxic chemicals, or compelling workers to hire children and bring their spouses to work through an unjust wage system.

The meat and poultry industry has one of the highest rates of injury and illness of any industry according to the U.S. Government Accountability Office, and the U.S. Department of Labor calculates that poultry workers are injured five times more than other workers.

Despite increasing production line speeds, Tyson’s poultry workers are routinely denied bathroom breaks and resort to wearing diapers. The company fails to provide adequate medical care to injured workers, under reports incidents of injury and illness and denies responsibility for workers who become injured or disabled. The company is routinely fined by the federal government for refusing to pay overtime wages.

It is estimated that 2.5 million Dayak Indigenous people in Borneo alone have been displaced to make way for industrial commodity production, namely for Conflict Palm Oil plantations, which produce palm oil that then may be used in products like Sara Lee baked pies. In Indonesia, more than 700 land conflicts are related to the palm oil industry.

In 1950, 95 percent of broiler chicken farms were independent in the U.S. Just five years later, independent farms only accounted for 10 percent of the industry, with most growers selling their goods under contract with a company. Today, 97 percent of chickens are produced on contract farms, in a system completely rigged in favor of large corporate processors.

70-80 percent of all antibiotics in the U.S. are used in the industrial production of animals for food. These lifesaving drugs are routinely fed to animals that are not sick to speed up growth and prevent diseases that easily spread in crowded, filthy factory farms.

Public health agencies have declared antibiotic resistance a top health threat in the U.S., and the rampant misuse of antibiotics in animal agriculture is the main culprit.

Even though Tyson enacted a policy that has it phasing out antibiotics for poultry in 2017, it has no such commitments for its beef and pork operations.

Given that Tyson has the biggest U.S. market share in poultry and beef (21 percent and 24 percent, respectively) and the third largest in pork (17 percent), Tyson must do better.

As with the previous points, there are many layers of abuse to uncover.

Conflict Palm Oil in Hillshire products is driving extinction: expansion of Conflict Palm Oil is one of the greatest threats to the survival of many critically endangered species in Indonesia and Malaysia, such as elephants, rhinos and orangutans.

In Tyson Foods’ own facilities, undercover investigations have documented blatant abuse of animals. In a recent investigation, a Tyson supervisor at a chicken factory is documented standing on birds’ heads to kill them, telling other workers to do the same.

The footage documents workers punching and kicking birds, running them over with forklifts, swinging them around by their wings and violently slamming them into cages.

These chickens never see sunlight or breath fresh air, and often suffer from crippling leg deformities. Before making it to the dinner plate, many chickens die slow, painful deaths from a number of diseases directly resulting from the filthy, overcrowded conditions of Tyson’s factory farms.

While palm oil is largely used in food and household products, another product from the oil palm tree called palm kernel meal is often used as feed in commercial meat operations.

Palm kernel meal is a commodity known for its cheap price and high cost to the environment, and feeding it to animals in factory farms is a double whammy for the climate.

What’s more, corn and soy, in addition to palm kernel meal, are all common ingredients in animal feed, and are unhealthy for both the livestock forced to eat them and the planet.

Although Tyson Foods has a position statement on palm oil, Tyson Foods does not have a policy in regards to its feed, and stands at risk of destroying the world’s forests for its animal feed.

Tyson’s Impact on the Planet

The livestock sector is a major driver of tropical deforestation globally.

Raising livestock and growing feed crops is the biggest driver of tropical deforestation in South America. In Brazil, for instance, 75 percent of deforestation has been linked to the cattle industry. Much of the rest is coming from the conversion of forests for soy production, which is then used in farm animal feed.

Given that Tyson operates major beef production facilities in China and that Brazil is a major soy exporter to the country (more than 50 percent of the soy produced by Brazil is exported to China), there is a huge risk that Tyson is using soy in animal feed that is linked to deforestation.

Tyson, a company that supplies to the likes of McDonald’s, Popeyes, and KFC (Yum Brands!), should have a policy to address these risks for its global operations.

Tyson’s pollution has been the subject of several legal challenges over the years, with the company paying more than $25 million in legal settlements and fines since 2001.

Most recently, the Attorney General of Missouri filed a lawsuit against Tyson Foods accusing the company of illegally discharging untreated wastewater that led to the death of up to 100,000 fish. Tyson settled with the state of Missouri in 2015 and agreed to pay $162,898 for natural resource damage, $110,000 in civil penalties, and reimbursed the Missouri Department of Conservation more than $36,000.

The global food system is responsible for roughly 30 percent of global greenhouse gas (GHG) emissions – a major contributor for an increasingly unstable climate.

These GHG emissions are produced largely by converting land for agricultural use, particularly from converting forest into farmland for industrial palm oil plantations or the production of feed crops, like soy and corn.

Within the agricultural industry at large, the livestock sector is a major contributor to the emission of greenhouse gases, representing 14.5 percent of human-induced GHG emissions.

As a major company in the global food system, Tyson’s industrial cattle, chicken and pig operations, as well as the palm oil-laden products it markets, are taking a major toll on the climate.

Tyson Foods must be held accountable. The true cost of Tyson Foods’ cheap meat production and cheap Conflict Palm Oil use is much too high. Tyson Foods has weak palm oil and meat commitments, and as we’ve seen, there is a huge gap between Tyson’s paper promises and its harmful practices.

Tyson Foods must do better. Take Action today by joining RAN and allies around the world in calling on Tyson Foods to adopt a responsible food policy. Click here to take action.

Editor’s Note: Recently, Tyson has announced the launch of a $150 million venture capital fund that will focus on investment in meat alternatives, such as Beyond Meat. The company is already beginning to realize that its business model may need to shift as consumers discover the truth and demand change.

Please join us in calling on Tyson Foods to fully commit to a responsible food policy by signing the petition now.