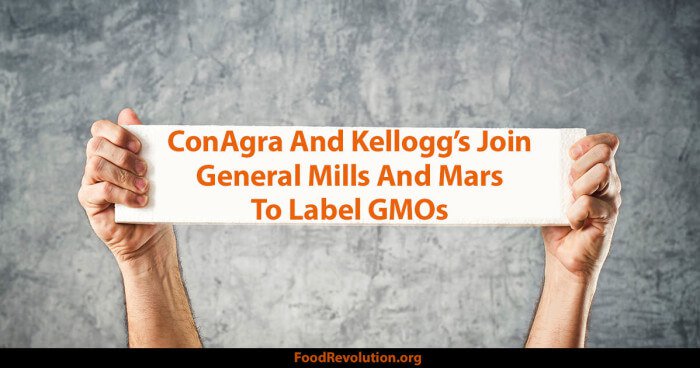 This is a big week for everyone who eats! Which is all of us.

Four major food companies – ConAgra Foods, Kellogg’s, General Mills and Mars, Inc. – announced they will label food products that contain genetically modified organisms, or GMOs.  These companies join Campbell’s Soup, which declared its intent to do likewise back in January.

The news comes less than a week after GMO labeling supporters in the Senate defeated the latest attempt at a bill that opponents have dubbed the Deny Americans the Right to Know Act, or DARK Act. That legislation would have prohibited states from requiring GMO labeling.  Vermont has already passed a mandatory labeling law, scheduled to go into effect July 1.

Now that five of the largest food companies in the world have made public commitments to print clear GMO labels on food packages, what might happen next?

One indicator could be how other food giants have dealt with GMO labeling battles during state ballot initiatives.

In the last four years, major food and chemical corporations have spent hundreds of millions of dollars to fight GMO labeling at the state and federal level, including more than $100 million to defeat state ballot initiatives.

In 2012, the first state ballot initiative, California’s Proposition 37, saw more than $45 million in contributions to the “No Campaign” by food and biotech giants. The next year, those who opposed GMO labeling contributed more than $20 million to defeat Washington’s Initiative 522. In 2014, labeling opponents raised more than $20 million and $12.6 million to beat Oregon’s Prop 92 and Colorado’s Prop 105  respectively.

While many companies have contributed hundreds of thousands of dollars year after year to these “No Campaigns,”  other businesses stopped supporting the campaigns after a year or two, probably because they didn’t want to give the impression that they had something to hide.  Many proponents of labeling, including advocacy groups and millions of individual Americans, called on major food and beverage companies to stop funding anti-labeling campaigns in states.

While not a perfect tool (both Kellogg’s and General Mills contributed to all four campaigns), looking back at who contributed to fight the state ballot initiatives may give us some insight into what might happen next.

The defeat of the DARK Act gives Congress the opportunity to craft a national mandatory GMO labeling compromise that works for Americans and the food industry. In the interim, the question is, which company will be next to provide clear GMO labeling right on its packages, where shoppers want to see it?