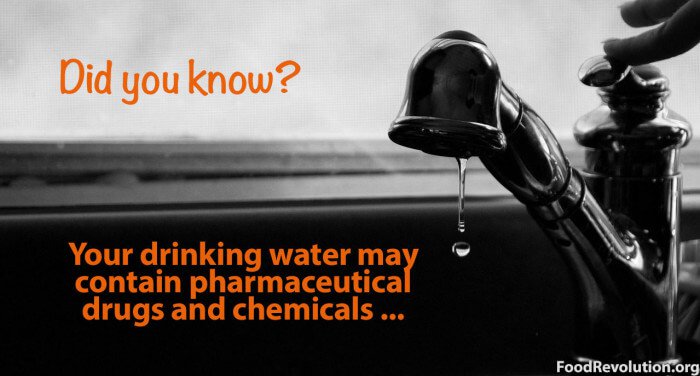 By Martha Rosenberg • Originally published by the Organic Consumers Association

The lead crisis in Flint, Mich. has drawn national attention to deadly and often underreported risks in the public water supply. Thanks to the chemical, agricultural and pharmaceutical industries, and antiquated water systems, Americans are imbibing a witch’s brew of drugs and chemicals often without realizing it.

These contaminants get into the water through human drug waste in sewage, medicines flushed down toilets, agricultural runoff and the wide use of endocrine disruptors like pesticides, flame retardants and plastic-related compounds like phthalates and BPA. (BPA has ironically been used in bottled water that people drink to avoid tap water risks!)

When it comes to pharmaceuticals in the water supply, both drug industry and water treatment professionals say traces are so small they probably pose no public health risk. Yet they also admit that testing has begun so recently that no one really knows the long-term effects.

“There’s no doubt about it, pharmaceuticals are being detected in the environment and there is genuine concern that these compounds, in the small concentrations that they’re at, could be causing impacts to human health or to aquatic organisms,” noted Mary Buzby, director of environmental technology for Merck.

Free–and unwanted–drugs in the drinking water

The sheer number of Americans taking drugs is one reason drugs in the water are a problem—60 percent of Americans now take prescription drugs. Direct-to-consumer drug (DTC) advertising has convinced millions of Americans to take statins, acid reflux medicines and assorted psychoactive medicines. Before DTC ads, the drugs were not nearly as popular. CNN reports that an astounding one-fourth of U.S. women are now on antidepressants.

The problem has only grown worse. By 2008, the Associated Press reported that 46 million Americans were drinking water containing psychiatric, cholesterol, asthma, epilepsy, heart and pain drugs as well as antibiotics.

Among the AP’s findings:

• An antibiotic in Tucson drinking water

In 2013, an EPA study confirmed the serious situation, finding that at least half of all water samples tested positive for some of 25 drugs.

It is not clear that decisive government action followed the reports. In fact, drugs in the drinking water system seem to be governed by a “don’t ask/don’t tell” policy.

For example, New Orleans water department officials reported that the city’s water had not been tested for drugs at the same time that Tulane University researchers in New Orleans found the pain reliever naproxen, the sex hormone estrone and a cholesterol drug byproduct in treated water.

Whom should we believe? According to journalist Dawn Fallik:

The problem is compounded, Fallik says, by the fact that EPA monitors only about 10 drugs as “contaminant candidates” and no safety levels or required testing exist for other drugs. (The government does test for naturally occurring microorganisms like cryptosporidium and coliform bacteria, barium, copper, lead and other metals and herbicides such as atrazine.)

As we saw in Flint, a water crisis endangers entire communities and provokes huge public distrust in municipal officials. “It’s a hard topic to talk about without creating fear in the general public,” admitted a Water Research Foundation spokesman to the Associated Press.

According to the World Health Organization (WHO) drugs behave no differently than other organic chemicals with “removal rates depending on their physicochemical properties and the treatment technology being used.” Chlorination, can remove approximately 50 of drugs, says WHO. Aozonation, advanced oxidation, activated carbon, nanofiltration and reverse osmosis achieve better clearance.

But other sources like Radio Canada and Michael Thomas, an associate professor of bioinformatics at Idaho State University, disagree. They say the drugs just fly through sewage treatment plants without being treated at all (perhaps like the micro plastic beads in personal care products).

No one disputes that wastewater treatment plants were never built to treat drugs, and that a drug can be biologically active at low concentrations even if most of it is removed. Moreover, when drugs are removed from the water, they are not “gone;” they become biosolids and sludge on which food might be grown. Farm crops, for example, were found to contain antibiotics which had siphoned up from manure.

Meanwhile, neither bottled water or home filtration systems are the clear solution. In 2009, Food and Water Watch found almost half of bottled water came from municipal taps. And Shane Snyder, co-director at the Arizona Laboratory for Emerging Contaminants at the University of Arizona, warns that oxidizing chemicals in home filtration systems can actually “make water more toxic.”

Livestock operations, and especially “factory farms,” are also a big source of drugs in the water. Water taken near a Nebraska feedlot had four times the levels of trenbolone, a hormone used to add weight to cattle, as other water samples reported the Associated Press. Male fathead minnows nearby had low testosterone levels and small heads.

Farm runoff is known for massive and devastating fish kills. But damage to aquatic life is only part of their harm. According to the Natural Resources Defense Council (NRDC), the microbe Pfiesteria piscicida can cause skin irritation, short-term memory loss and other cognitive problems in humans and nitrate runoff is linked to the risk of methemoglobinemia or “blue-baby syndrome” and spontaneous abortions.

Clearly, drugs and chemicals in the drinking water are a huge, underreported problem which officials are barely addressing.

And, as we saw in Flint, what we don’t know about water safety can indeed hurt us.

For years, I’ve been researching the best home water filtration system, and to be honest, I’ve been frustrated. Most of the options available have significant downsides. And many may not even remove the nasty pharmaceuticals and chemicals described in this article.

An Associated Press review stated that “One technology, reverse osmosis, removes virtually all pharmaceutical contaminants.” But the trouble with RO systems is that they can cost hundreds of dollars, plus hundreds more in maintenance and installation costs. And they typically waste four gallons of water for every clean gallon they produce.

Fortunately, I’ve just learned of a fascinating new development, which is a countertop Reverse Osmosis (RO) unit that slashes the cost of purchase, requires no installation fees, has extremely minimal maintenance costs, and that wastes less than ¼ the water that is lost in a typical RO setup. The system is called AquaTru. When we asked the company if their system removes all the prescription drugs and other toxins mentioned in this article, the company replied that “As far as we know, AquaTru removes them all.” They caution that there are over 10,000 prescription drugs out there, and there is no way they can test every one, so they can’t legally say 100 percent. But they do feel comfortable saying “99 percent.”

I’ve tested it, and I think it’s fantastic. And perhaps best of all, the AquaTru is available now for order at $100 off of an already extraordinary price. Find out more about the water filtration system I discovered, here.