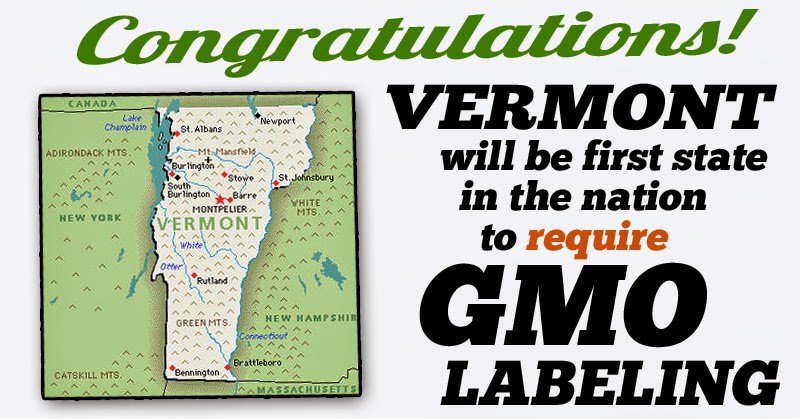 In Vermont, GMO labeling law goes into effect July 2016. However, a lawsuit has been filed by food companies. Who will prevail?

Vermont will hopefully be the first state in the nation to require the labeling of food made with genetically modified organisms. The right to label was hard won in a fight against biotech interests in a vote that had to be defended by a 51-page court filling by Attorney General Bill Sorrell when a lawsuit was filed by Grocery Manufacturers Association (GMA), the National Association of Manufacturers (NAM), International Dairy Foods Association (IDFA) and the Snack Foods Association (SFA)– to keep consumers in the dark about what is in their food. The GMA, NAM, IDFA and SFA don’t think Vermont has the right to demand to know if their food products contain GMO – but with the new GMO labeling rules – they’ll be hard pressed to get around labeling.

The Vermont Attorney General’s Office has released its first draft of the labeling rules which big food manufacturers will be expected to follow. They include nine pages of rules which include definitions of ‘food’ and ‘genetic engineering.’ They also detail that food labels must be ‘conspicuously placed’ so that consumers can tell if what they are about to purchase contains GMOs. Food manufactures won’t be able to hide the label with backgrounds or tiny font, for example. The label will say simply:

The draft will be reviewed in three public hearings that are expected to transpire over the next few weeks, in order to gather public opinion on the rules put forth.

It was just last May that Gov. Peter Shumlin signed the new GMO labeling law into effect.

When defining ‘food’ the draft states:

To define GE, the draft states:

“Genetic engineering” is a process by which a food is produced from an organism or organisms in which the genetic material has been changed through the application of: (a) in vitro nucleic acid techniques, including recombinant deoxyribonucleic acid (DNA) techniques and the direct injection of nucleic acid into cells or organelles.”

Reasonably enough, the GMO label will be required to be found easily on the package when consumers are viewing it, much like the Nutrition Facts label which is already required on food packaging by the United States Food and Drug Administration.

It is estimated that Vermont’s legal battle to retain the right to label its food in-state will cost them $8 million, but it’s a small price to pay to eradicate the non-food items biotech bullies are so eager to sell to a public who doesn’t want them.

Vermont’s labeling law will take effect in July 2016 pending the outcome of the lawsuit, and it will be just in time. Over 80% of packaged foods in the US currently contain GMOs.

Jerry Greenfield, co-founder of Ben & Jerry’s ice cream, and Gov. Peter Shumlin announce at a rally in Burlington on June 16 that Ben & Jerry’s will rename one of its ice creams and donate $1 from each pint sold to the Food Fight Fund. The fund is to help defray the cost of defending the state’s new GMO-labeling law against lawsuits alleging the measure is unconstitutional.

Sorrell and a team of lawyers he has appointed to work on the case argued the state may make labeling restrictions to promote “informed decision-making on matters of public health and the environment.”

The state also argues that the law steers clear of violating interstate commerce, as the labeling adds no burden that outweighs the benefits.

Pointing to two court cases, Sorrell argues that federal courts have upheld New York City’s law requiring the posting of calories on menus and a federal law requiring country-of-origin labels on meat on the premise that the laws allow consumers to make more informed choices.