Is There Child Slavery in Your Chocolate? 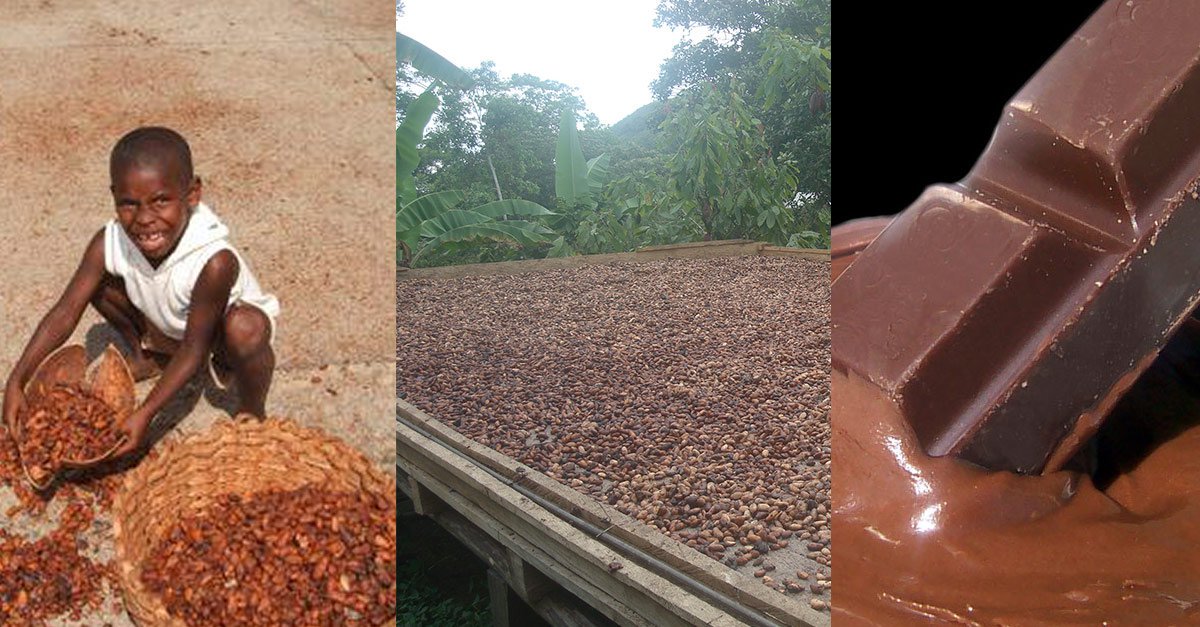 We live in cynical times. We are no longer surprised when we find that a major company, like Monsanto or Walmart, has done something horrible, and then made things worse by hiding the consequences of its actions from the public.

But even in a day of widespread and flagrant abuse of power, there is a dark side to the operations of the Hershey company that make it particularly egregious. Hershey, which is the largest chocolate manufacturer in the world, gets most of its cocoa from West Africa. The company purchases the primary ingredient in its products from sources notorious for abusive labor practices including forced labor, human trafficking, and child slavery.

In 2009, the Payson Center for International Development at Tulane University published an “assessment of child labor in the cocoa supply chain.” The study found child labor to be widespread in the very regions of West Africa, particularly Ivory Coast, where Hershey sources its cocoa, and that forced or involuntary child labor was common in these areas.

Ivory Coast, located on the southern coast of West Africa, is by far the world’s largest supplier of cocoa beans, providing 43% of the world’s supply. According to an investigative report by the British Broadcasting Company (BBC), hundreds of thousands of children are being purchased from their parents for a pittance, or in some cases outright stolen, and then shipped to Ivory Coast, where they are enslaved on cocoa farms. These children typically come from countries such as Mali, Burkina Faso, and Togo. Destitute parents in these poverty-stricken lands sell their children to traffickers believing that they will find honest work once they arrive in Ivory Coast and then send some of their earnings home. But that’s not what happens. These children, usually 11-to-16-years-old but sometimes younger, are forced to do hard manual labor 80 to 100 hours a week. They are paid nothing, receive no education, are barely fed, are beaten regularly, and are often viciously beaten if they try to escape. Most will never see their families again.

“The beatings were a part of my life,” Aly Diabate, a freed slave, told reporters. “Anytime they loaded you with bags (of cocoa beans) and you fell while carrying them, nobody helped you. Instead they beat you and beat you until you picked it up again.”

Brian Woods has made films about some of the world’s worst human rights abuses. He tells of meeting Drissa, a young many from Mali who had been forced to work on an Ivory Coast cocoa farm. “When Drissa took his shirt off, I had never seen anything like it. I had seen some pretty nasty things in my time but this was appalling. There wasn’t an inch of his body which wasn’t scarred.”

Buying cocoa from farms that employ such abusive child labor practices enables Hershey to keep its costs down and its profits up. In early 2010, the company reported a 54% jump in profits because of what it called “improved supply-chain efficiencies.” Such “efficiencies” allow Hershey’s CEO, David J. West, to make $8 million a year while unpaid children are forced to labor under cruel conditions on the farms growing the company’s cocoa.

The reality of abusive labor conditions on West African cocoa farms is a longstanding and difficult problem for the entire chocolate industry. But while Hershey’s primary competitors have at least taken steps to reduce or eliminate slavery and other forms of abusive child labor from their chocolate supply chains, Hershey has done almost nothing.

In 2010, on the occasion of founder Milton Hershey’s 153rd birthday, the Hershey company issued its first ever Corporate Social Responsibility Report. Long on platitudes and promises, it was classic example of the practice of greenwashing – a PR effort to mislead the public into thinking a company’s policies and products are socially responsible, when in fact they are not.

Meanwhile, on that very same day, a coalition of public interest nonprofit groups (Green America, Global Exchange, Oasis USA and the International Labor Rights Forum) issued an in-depth counter-report, titled “Time to Raise the Bar: The Real Corporate Social Responsibility Report from the Hershey Company.” This carefully researched report pointed out that the Hershey company lags well behind its competitors in taking responsibility for the impact the company is having on the local communities from which it sources cocoa around the world.

Hershey is well aware that many smaller chocolate companies in the US have for years purchased only Fair-Trade Certified cocoa, thus ensuring that cocoa farmers earn enough to support their families, invest in their futures and send their children to school. Hershey claims that though this is possible for smaller companies, it would be impossible for a company as large as it is.

But Time to Raise the Bar made it crystal clear that it’s not just the smaller companies who have taken meaningful steps. “Many of the largest global chocolate corporations,” said the report, “are increasingly sourcing cocoa beans that have been certified by independent organizations to meet various labor, social and environment standards. But there has been one major exception to this trend: the Hershey Company.”

If other companies can do it, why can’t Hershey? Do they think it’s okay that children are abducted and then sold as slaves to Ivory Coast cocoa farmers?

Do you think it’s okay?

Faced with large-scale public pressure, Hershey has announced that they are moving towards Fair-Trade certification by 2020. That’s a nice step. But why does it need to take them that long to end participation in a horrendously exploitive system? There’s nothing sweet about manufacturing 80 million Hershey Kisses a day, using cocoa that may very well have been produced using abusive child labor.

If you want to keep applying more pressure, here’s what you can do: