Clowning Around with Charity: How McDonald’s Exploits Philanthropy and Targets Children 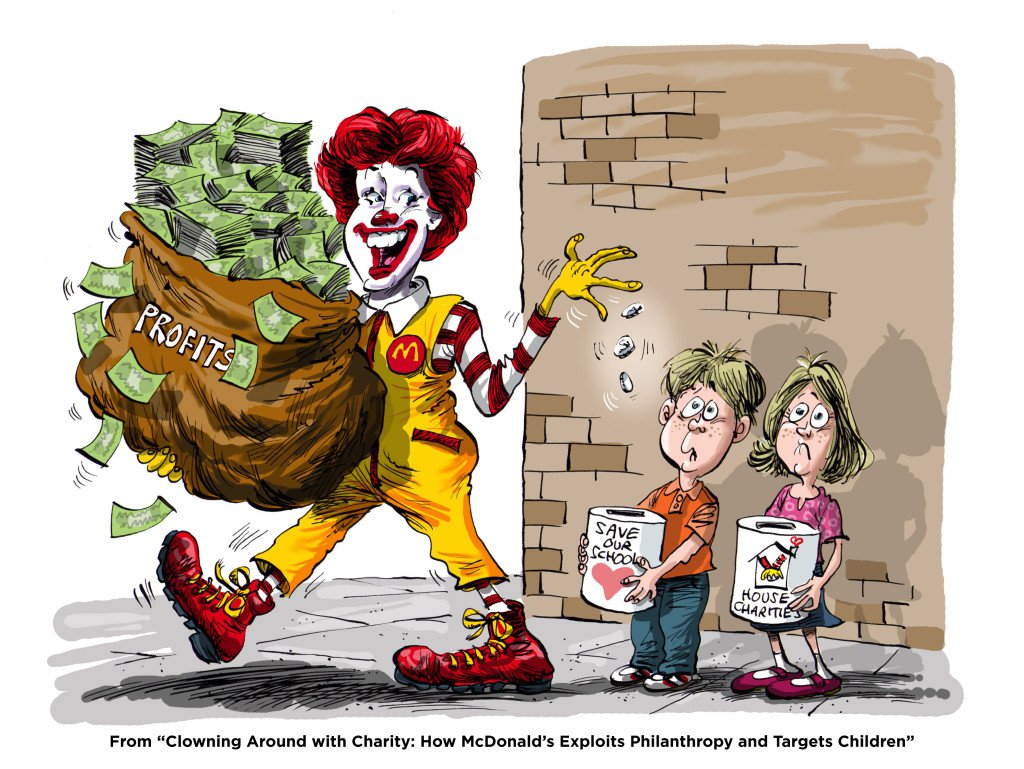 Pop quiz: Who do you think funds the hundreds of Ronald McDonald Houses around the nation? McDonald’s right? Sort of, but not really. While McDonald’s gets 100 percent of the brand benefit from Ronald McDonald House Charities, the burger giant only provides about 20 percent of its funding globally. At the local level, it’s closer to ten percent, with some of that money coming from donation boxes at McDonald’s outlets, that is, from customers.

Confused? Wondering how a corporation that raked in $27 billion last year can be so stingy with its own charity? You’re not alone. In my new report, “Clowning Around with Charity: How McDonald’s Exploits Philanthropy and Targets Children,” I show how McDonald’s enjoys a huge public relations and marketing boost relative to how little money it donates. In fact, Ronald McDonald Houses report that the name causes many people to assume that McDonald’s provides 100 percent of the charity’s funds – and that this “common misperception” is “absolutely confusing.” In other words, the McDonald’s brand may be more of a liability than it’s worth.

Little could be more important than giving families a comforting place to stay together during such stressful times. The cause’s importance, and the extent to which McDonald’s is serving versus exploiting that cause, is all the more reason for gaining a better understanding of the corporation’s involvement.

Despite McDonald’s claims of philanthropic generosity, the reality doesn’t match the rhetoric. The report’s findings include how McDonald’s philanthropic giving is 33 percent lower than leading corporations and that McDonald’s spends almost 25 times as much on advertising as on charitable donations.

I also examined how McDonald’s targets children in schools under the guise of charity. For example, at events called McTeacher’s Night, teachers serve as free labor for McDonald’s while parents buy fast food to raise money for schools. While a great way to boost sales for McDonald’s, the return for schools can equal as little as $1 per student.

Why pick on McDonald’s philanthropy? Because the burger giant uses charity as a shield against critics, to distract from its harmful business practices. Over the past several years, public health advocates and groups such as Corporate Accountability International have called upon McDonald’s to “retire Ronald” in light of the mascot’s insidious marketing toward children. In response, McDonald’s says no way, because after all, “Ronald McDonald is the heart and soul of Ronald McDonald House Charities”  and provides “educational” messages to children in schools about exercise and nutrition. But by sending Ronald into schools, McDonald’s not only defies common sense (who gets health advice from a clown?) but is also violating its own voluntary pledge not to market in the school setting.

McDonald’s philanthropy does not take place in a vacuum and should be viewed with a critical eye given the serious health risks children face today. McDonald’s charitable activities are mostly self-serving and have significant negative ramifications for public health and policy. While McDonald’s pretends to be “giving back,” it continues to lobby against policies to reduce junk food marketing to children and refuses to pay its workers a living wage, despite growing protests.

We are in the midst of a public health crisis among adults and children alike. We can no longer allow McDonald’s to exploit charity as a vehicle for marketing a junk food brand to kids and as a shield from criticism for the corporation’s central role in today’s epidemic of diet-related disease and other problems.

The report was produced in collaboration with Corporate Accountability International and the Small Planet Fund.