The Surprising Inflammation and Aging Benefits of Caffeine 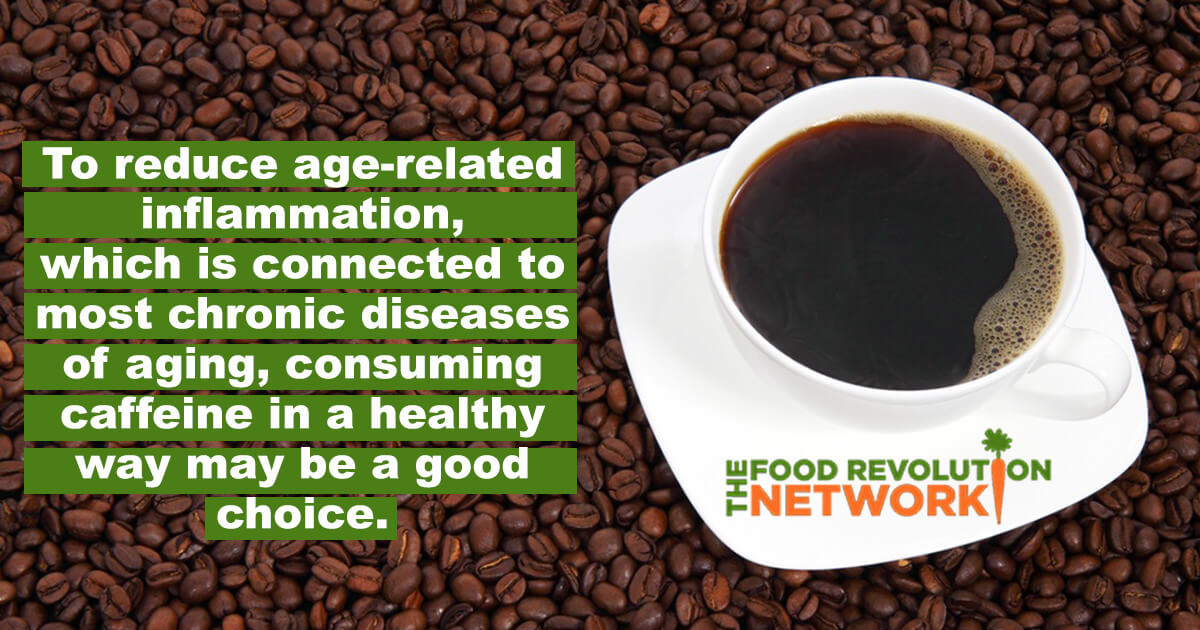 Are there benefits of caffeine consumption?

If you enjoy drinking caffeinated coffee or tea, here’s a new reason why this could be a healthy, anti-aging habit for you.

Coffee drinkers tend to live longer than those who don’t drink coffee. And thanks to new research, we’re beginning to have a better understanding of why.

Research published in the journal Nature Medicine in January 2017 shows how consuming caffeine in the form of coffee or tea could protect against age-related inflammation, which causes most diseases of aging.

What Is Inflammation and How Is It Connected to Aging?

Inflammation is an important function of the immune system, helping to fight off infections and remove toxins. But as we age, our bodies become less effective at managing inflammation.

Scientists have long linked chronic inflammation with diseases of aging, including heart disease, Alzheimer’s, and some types of cancer. They’ve also known about the connection between caffeine intake and longevity.

But until now, understanding the inflammation response and how caffeine could be affecting the immune system has been unclear.

More About the Study

When researchers analyzed the genes of people of varying ages enrolled in a multi-year study, they found that the older people, aged 60 to 89, with low levels of inflammation were all caffeine drinkers. And the people with high blood pressure and stiff arteries — signs of heart disease — all reported drinking less or no caffeine.

To further investigate this finding, the scientists added inflammation-causing compounds to human immune cells and then added caffeine. Surprisingly, the caffeine prevented the compounds from having inflammatory effects.

The discovery of a new pathway associated with inflammation occurred through this research. And this allows scientists to have a better understanding of aging and soem of the markers of inflammation.

Caffeinated coffee and tea are already a part of many people’s day, and this new finding furthers the possibility that they could be a healthy choice.

More research is needed to fully explain how caffeine is interfering with inflammation. But a growing body of research is showing us how healthful coffee and tea can be — and not only because they may help to block inflammation.

Coffee has been shown to have some unexpected and stunning anti-aging health benefits, from decreasing the risk of diseases, including dementia, stroke, and type 2 diabetes, to prolonging life expectancy overall.

In his landmark book, How Not to Die, Michael Greger, MD, explains the effectiveness of coffee consumption in preventing and treating Parkinson’s disease. And the key helpful ingredient appears to be the caffeine.

The Type of Caffeine Matters

But if you’re thinking energy drinks are a good choice because they also contain caffeine, think again. Energy drinks use synthetic caffeine — a substance first created by Monsanto, which your body processes differently than natural caffeine. (See more about why energy drinks aren’t a healthy choice.)

Soda also has caffeine, but it isn’t a healthy choice either, and not just because of its high sugar content. In fact, soda has serious health risks, beyond just contributing to weight gain and being bad for your teeth.

And even with healthful choices, like coffee and tea, it’s still important to consume caffeine in moderation. Excessive amounts of caffeine can overstimulate your nervous system, adrenal glands, and interfere with sleep. So if you drink caffeine-containing beverages, be conscious and listen to your body when you do.

Coffee accounts for almost half of the total exports from tropical countries, so coffee production has a massive impact on the lives and livelihoods of hundreds of millions of families and farmers. Regrettably, many of them are living in poverty.

Therefore, the kinds of coffee we choose have a profound impact on the kind of world we shape for future generations. Fair trade, shade grown, and organic coffees are the types to reach for to help to shape a fairer and healthier world.

Do you love coffee? Here are some surprising health benefits of this popular beverage.