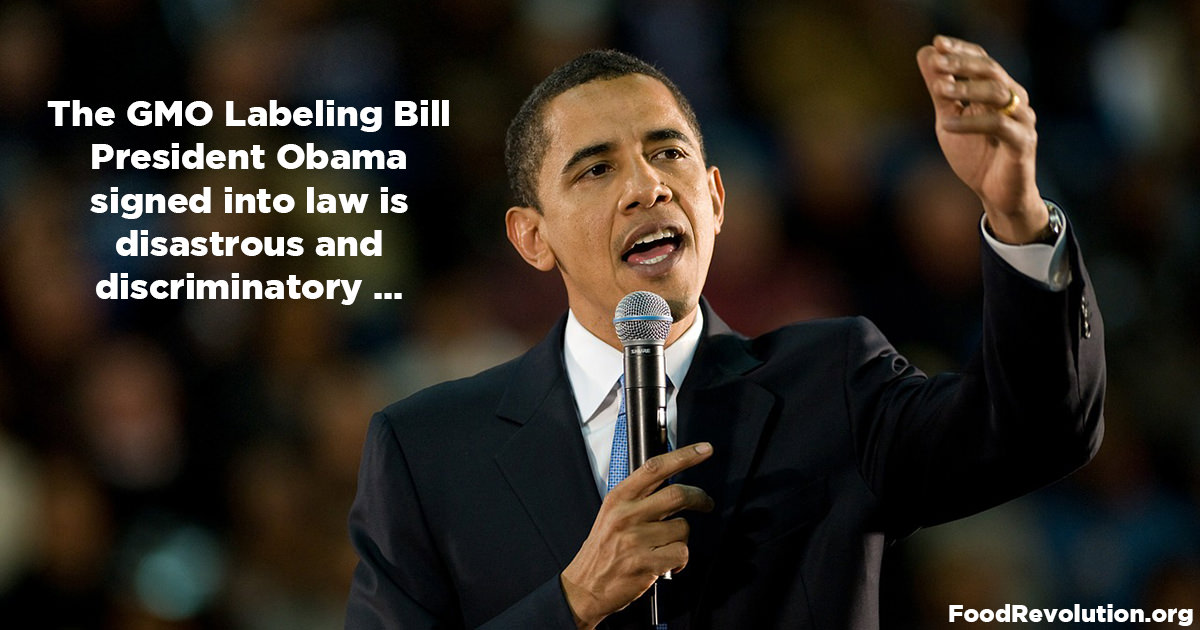 On late Friday afternoon, President Obama signed the sham Stabenow-Roberts GMO-Labeling bill (S. 764) which will allow, among many other things, companies to use QR codes instead of clear GMO labels on a food product’s packaging.

This bill is so discriminatory and so poorly written that it potentially violates several amendments of the Constitution. Additionally, it puts the integrity of the organic seal in real jeopardy.

What is arguably the most troubling aspect of this bill is that while almost every single organic consumer organization fought this bill, the organic industry’s leading trade organization praised the bill and lobbied for it to pass. 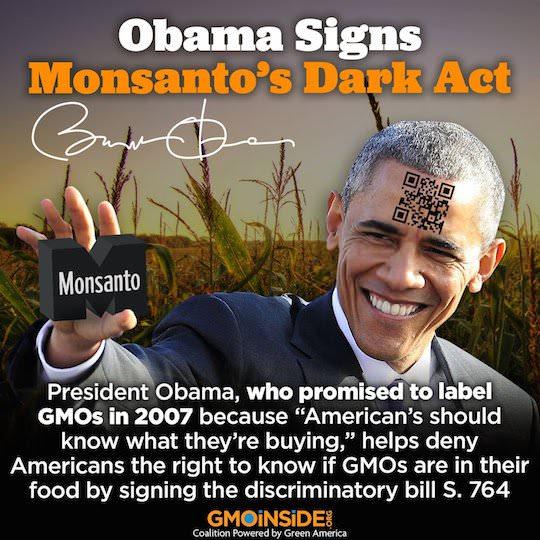 Here are the key points to understand, in terms of analyzing the bill, what this means for the organic industry, and where we go from here.

Polls consistently show that 90% of Americans want GMOs to be labeled. This is irrefutable. See here, here, and here.

Yet, the bill, which does not mandate the full and easy disclosure of GMOs, easily passed through both the U.S. Senate and House of Representatives.

When President Obama pledged to label GMOs while campaigning in 2007, there is no chance that he would have found QR codes or 1-800 numbers to be acceptable alternatives.

Yet, to no one’s surprise, the President has turned his back on the organic community again, something that he has done for eight straight years. Not only did he sign this bill but his administration has rubber-stamped every new GMO application, including genetically-engineered salmon.

The bill potentially violates several amendments of the constitution

According to Andrew Kimbrell, Executive Director of the Center for Food Safety, “this is worst written bill I have seen in all of my time in Washington, D.C. There are so many flaws in this bill that it potentially violates several amendments of the Constitution.”

Perhaps, most obviously, the bill seems to be a clear violation of the 14th Amendment, as it would allow corporations to use QR codes instead of clear packaging on labels. Since nearly 100 million Americans, predominantly the elderly and low-income population, do not have smartphones, the bill is discriminatory and does not treat all citizens equal. 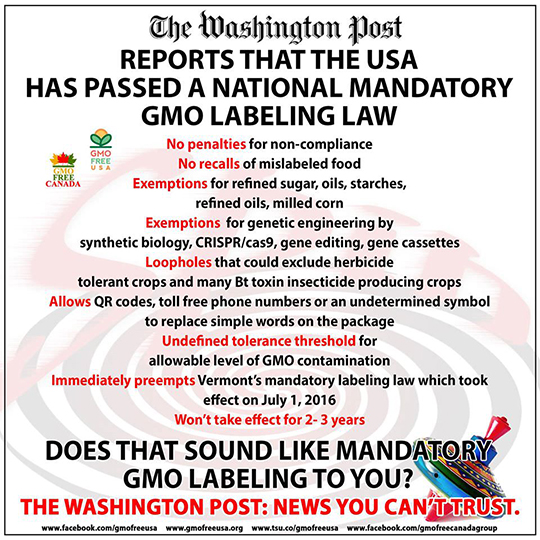 No enforcement, interpretation is a serious concern

Aside from the fact that the bill preempts any state’s food and seed labeling laws, including Vermont’s GMO-labeling law, it also does not have to go into effect for another two years, and there is zero penalty for non-compliance.

Yet, arguably, the largest concern is that so much of the bill is open to interpretation and will ultimately be decided by the Secretary of Agriculture.

Key issues to be determined:

The bill also calls for S. 764 to be “harmonized” with the Organic Food Production Act.  What does this mean exactly?  It is very uncertain but it is definitely not good at all.

Betrayal by the Organic Trade Association

In March, a federal GMO-labeling bill was rejected in the Senate. Somehow, this nearly identical bill, S. 764, just got approved a few weeks ago.

What happened between March and July?

According to Andrew Kimbrell, the support of the bill by the Organic Trade Association (OTA), who has numerous industrial food companies as members, was responsible for between 10-20 Senators changing their minds about this bill. Once passed, Laura Batcha, the OTA’s CEO, and Melissa Hughes, President of OTA’s board of directors and an executive at Organic Valley, praised the bill.

Yet, OTA’s support of this bill flies in the face of extreme opposition of the bill by almost every single organic consumer non-profit organization.

Andrew Kimbrell, who has been fighting to protect organic for more than 30 years, did not mince words when asked about the OTA.

“The OTA leadership bears a tremendous responsibility for this, and they betrayed the whole food movement. The problem is that when the OTA talks with Senators and takes a position supporting a bill, those Senators think that the OTA is speaking for the entire organic business sector and for all organic consumers. When in fact it was only a very small cadre at the top of the OTA who went rogue and decided this. Neither the OTA Board nor its members voted on this, and most were not even aware of what the upper echelon of OTA was doing. And the vast majority of organic farmer and consumer organizations vehemently opposed the DARK Act.”

One of the reasons that the OTA praised this bill was because the words “Non-GMO”can now be put on the labels of USDA certified organic products.

But what happens down the road if organic products are found to have very high levels of GMO-contamination, yet these products contain the label “Non-GMO” on the outside of the packaging?  And what happens if the Secretary of Agriculture declares that CRISPR/Cas9 gene-editing technology can be used in organic?

These two things could very well happen, thanks to this new GMO-labeling bill, which the OTA pushed for. The integrity of organic will suffer tremendously and might never be viewed in the same light again.

Through its actions, the OTA, the most influential organic lobbying group in Washington, D.C., has made it very clear that it does not represent the best interests of organic consumers. And as someone who lives and breathes organic, I cannot tell you how distressing this is.

It goes without saying that members of the OTA ought to be asking themselves A LOT of very hard questions right now.

Lawsuits will be coming

Despite the betrayal of the OTA and the passage of this bill, Andrew Kimbrell remains optimistic.

“The good news is that food labeling has brought the community together in a way that I never anticipated.  We have hundreds of groups sticking together and an enormous grass roots movement. It has been remarkable.”

Connect with Max Goldberg at LivingMaxwell.com

We lost a battle over labeling GMOs. But the movement is FAR from over. Consumer opposition to GMOs is growing fast. Forty percent of the American public now wants to avoid GMOs, and overall cultivation of genetically engineered corn and soy in the United States has actually gone down in the last two years. And now – we have to stand strong, because there’s a new frontier that Monsanto and the biotech industry want to penetrate, and this would be the biggest one of all.

Monsanto has created wheat plants that are resistant to Roundup and other highly toxic herbicides, and is now seeking to bring these crops into commercial planting. This would put the entire U.S. wheat supply at risk for contamination. GE wheat would also mean a massive increase in the use of pesticides and fertilizers. As we have seen with other herbicide-resistant crops, the long-term risks to people and planet are huge.  The Food Revolution Network has joined with Green America to stand up to Monsanto and speak out against approval of GE wheat. Please join us and support the work to make our food and agriculture healthier and safer for people and for the planet. Click here to sign the petition now.

Share with us! What are your thoughts about the GMO “Labeling” Bill that passed?

What Is Tempeh? How to Include This Fabulous, Fermented Food in Your Diet