Study: Eating meat and cheese as deadly as smoking? 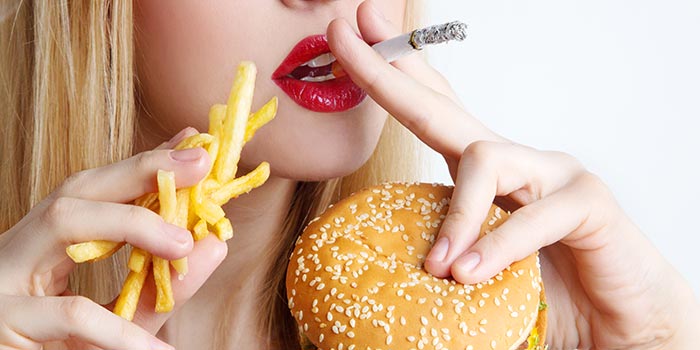 That chicken wing you’re eating could be as deadly as a cigarette. In a new study that tracked a large sample of adults for nearly two decades, researchers have found that eating a diet rich in animal proteins during middle age makes you four times more likely to die of cancer than someone with a low-protein diet — a mortality risk factor comparable to smoking.

“There’s a misconception that because we all eat, understanding nutrition is simple. But the question is not whether a certain diet allows you to do well for three days, but can it help you survive to be 100?” said corresponding author Valter Longo, the Edna M. Jones Professor of Biogerontology at the USC Davis School of Gerontology and director of the USC Longevity Institute.

Not only is excessive protein consumption linked to a dramatic rise in cancer mortality, but middle-aged people who eat lots of proteins from animal sources — including meat, milk and cheese — are also more susceptible to early death in general, reveals the study to be published March 4 in Cell Metabolism. Protein-lovers were 74 percent more likely to die of any cause within the study period than their more low-protein counterparts. They were also several times more likely to die of diabetes.

But how much protein we should eat has long been a controversial topic — muddled by the popularity of protein-heavy diets such as Paleo and Atkins. Before this study, researchers had never shown a definitive correlation between high protein consumption and mortality risk.

Rather than look at adulthood as one monolithic phase of life, as other researchers have done, the latest study considers how biology changes as we age, and how decisions in middle life may play out across the human lifespan. In other words, what’s good for you at one age may be damaging at another. Protein controls the growth hormone IGF-I, which helps our bodies grow but has been linked to cancer susceptibility. Levels of IGF-I drop off dramatically after age 65, leading to potential frailty and muscle loss.

The study shows that while high protein intake during middle age is very harmful, it is protective for older adults: those over 65 who ate a moderate- or high-protein diet were less susceptible to disease. The latest paper draws from Longo’s past research on IGF-I, including on an Ecuadorian cohort that seemed to have little cancer or diabetes susceptibility because of a genetic mutation that lowered levels of IGF-I; the members of the cohort were all less than five-feet tall.

“The research shows that a low-protein diet in middle age is useful for preventing cancer and overall mortality, through a process that involves regulating IGF-I and possibly insulin levels,” said co-author Eileen Crimmins, the AARP Chair in Gerontology at USC.

“However, we also propose that at older ages, it may be important to avoid a low-protein diet to allow the maintenance of healthy weight and protection from frailty.” Crucially, the researchers found that plant-based proteins, such as those from beans, did not seem to have the same mortality effects as animal proteins. Rates of cancer and death also did not seem to be affected by controlling for carbohydrate or fat consumption, suggesting that animal protein is the main culprit.

“The majority of Americans are eating about twice as much proteins as they should, and it seems that the best change would be to lower the daily intake of all proteins but especially animal-derived proteins,” Longo said. “But don’t get extreme in cutting out protein; you can go from protected to malnourished very quickly.”

Longo’s findings support recommendations from several leading health agencies to consume about 0.8 grams of protein per kilogram of body weight every day in middle age. For example, a 130-pound person should eat about 45-50 grams of protein a day, with preference for those derived from plants such as legumes, Longo explains. The researchers define a “high-protein” diet as deriving at least 20 percent of calories from protein, including both plant-based and animal-based protein. A “moderate” protein diet includes 10-19 percent of calories from protein, and a “low-protein” diet includes less than 10 percent protein. Even moderate amounts of protein had detrimental effects during middle age, the researchers found.

Across all 6,318 adults over the age of 50 in the study, average protein intake was about 16 percent of total daily calories with about two-thirds from animal protein — corresponding to data about national protein consumption. The study sample was representative across ethnicity, education and health background. People who ate a moderate amount of protein were still three times more likely to die of cancer than those who ate a low-protein diet in middle age, the study shows.

Overall, even the small change of decreasing protein intake from moderate levels to low levels reduced likelihood of early death by 21 percent. For a randomly selected smaller portion of the sample – 2,253 people – levels of the growth hormone IGF-I were recorded directly. The results show that for every 10 ng/ml increase in IGF-I, those on a high-protein diet were 9 percent more likely to die from cancer than those on a low-protein diet, in line with past research associating IGF-I levels to cancer risk.

“Almost everyone is going to have a cancer cell or pre-cancer cell in them at some point. The question is: Does it progress?” Longo said. “Turns out one of the major factors in determining if it does is is protein intake.”

Story Source: The above story is based on materials provided by University of Southern California.
Originally published in Science Daily – by Suzanne Wu