What You Need To Know About Tap Water 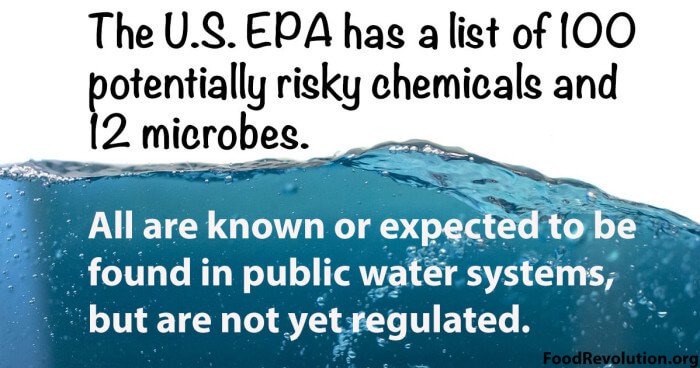 The city of Flint, Michigan, has been in the news a lot recently. More than 100,000 people, including all 9,000 of the city’s children, have been exposed to dangerous levels of lead and other toxins through their drinking water.

It turns out that in 2014, the city shifted its water source, fudged test results, and accidentally poisoned its population. Now the entire water system is contaminated. Property values have crashed. And there’s even talk of relocating all of the children in the city.

And It’s Not Just Flint

Flint is an extreme case – and a tragic one.

But the problem of unsafe tap water is not, unfortunately, unique to Flint.

Although the U.S. Congress banned lead water pipes 30 years ago, between 3.3 million and 10 million older ones remain, and are primed to leach lead into tap water as a result of forces as simple as jostling during repairs or a change in water chemistry.

And the issue isn’t just lead. The U.S. EPA has compiled a list of 100 potentially risky chemicals and 12 microbes that are known or expected to be found in public water systems, but are not yet regulated. And an Associated Press report found that the drinking water of 41 million Americans was contaminated with trace amounts of pharmaceuticals – including antibiotics, anti-convulsants, mood stabilizers and sex hormones.

The U.S. Government does not require any testing for drugs in the water supplies; nor does it set safety limits for drug contamination. It may be decades before we know the long-term effects of ingesting random cocktails of partially digested prescription drugs.

There are many contaminants that municipal water might accidentally contain. But there are also some that are added on purpose.

Chlorine is added to almost all municipal water supplies in order to kill dangerous pathogens. And as a disinfectant, it works – brilliantly. By some estimates, adding chlorine to municipal water supplies may have increased life expectancy by 50 percent over the past century. In many parts of the world, it has virtually eliminated water-borne diseases such as typhoid fever and cholera.

But the trouble is that unless chlorine is filtered out, we’re left drinking it. And chlorine tends to interact with organic compounds in fresh water to create trihalomethanes (THMs), which when ingested can encourage the growth of free radicals that can destroy or damage vital cells in the body. In fact, there are many studies linking exposure to chlorinated water and THMs with higher incidences of bladder, rectal and breast cancers, as well as with asthma, eczema, heart disease and higher miscarriage and birth defect rates. There is also a growing evidence that drinking chlorinated water may be damaging to our bodies’ 100 trillion or so bacteria, which together make up the microbiome and which, we are increasingly recognizing, are essential to digestive and overall health.

Fluoride is of the most controversial chemicals of our times, and a chemical that is routinely added to municipal water supplies in the U.S.

Many scientists believe that it makes an important contribution to dental health, and that is has been proven safe.

Others believe its dental value is unproven, and are concerned about the potential for unexamined health risks. They point out that what we take into our body affects a lot more than our teeth. In fact, a 500 page review of fluoride safety, conducted by the National Academy of Sciences (NAS) in 2006, concluded that fluoride was an “endocrine disruptor” and can affect many things in the body, including the bones, the brain, the thyroid gland, the pineal gland, and even blood sugar levels. The NAS called upon scientists to investigate if current fluoride exposures in the United States might possibly be contributing to chronic health problems – including bone disorders, thyroid disease, low intelligence, dementia, and diabetes.

Whether fluoride is ultimately beneficial for public health, or not, is controversial. But if you drink municipal tap water, chances are you’re drinking it every day, whether you like it or not.

Water Is Essential To Your Health

Despite all the dangers and uncertainties of tap water, one thing is very clear.

We all need water.

In fact, water is absolutely fundamental to long-term health. Your body is made up of approximately 70% water. Every single cell, tissue, and organ in your body needs water to function properly.

Some researchers also believe that water may also be the most important “nutrient” for cancer prevention. Research published in the Journals of Clinical Oncology found that the more water someone drinks, the less likely they are to develop bladder, colon, and breast cancers.

So, Where Do You Get Your Water?

Many people, fearful of their tap water, are opting for bottled water instead. In fact, Americans now buy nearly a billion bottles of water each week. But, as we’ve written about in depth, the sad reality is that bottled water is subject to even less regulation and testing than tap water. It’s been sitting, often for months, in flexible plastic containers. It costs an average of 2,000 times more than tap water. And it’s something of an environmental disaster.

So if you want to continue to drink water, but you don’t want to use plastic water bottles, what do you do?

That’s where water filtration comes in. There are many options for home water filters, ranging from carbon to reverse osmosis to home distillers.

A good filtration system leads you to an abundant supply of affordable, good tasting, environmentally responsible water that can help you to thrive.

For years, I’ve been researching the best home water filtration system, and to be honest, I’ve been frustrated. Most of the options available have significant downsides. Carbon filters need their cartridges changed regularly, or else they can actually begin to stockpile contaminants. Plus, they are unable to remove fluoride. Reverse osmosis (RO) units deliver high-quality water, but they can cost hundreds of dollars, plus hundreds more in maintenance and installation costs.

Fortunately, I’ve just learned of a fascinating new development, which is a countertop RO unit that delivers amazing water quality and flavor, slashes the cost of purchase, requires no installation fees, and that has extremely minimal maintenance costs. I’ve tested it, I think it’s fantastic – and it’s available now for order at a $100 discount. If this interests you, you can find out more about my favorite water filtration system here.

Whatever option you settle upon, remember that creating an abundant supply of clean, good-tasting, and affordable water is one of the greatest gifts you can give yourself and your loved ones.