Fruit Has Fantastic Health Benefits, But Can You Eat Too Much Fruit? 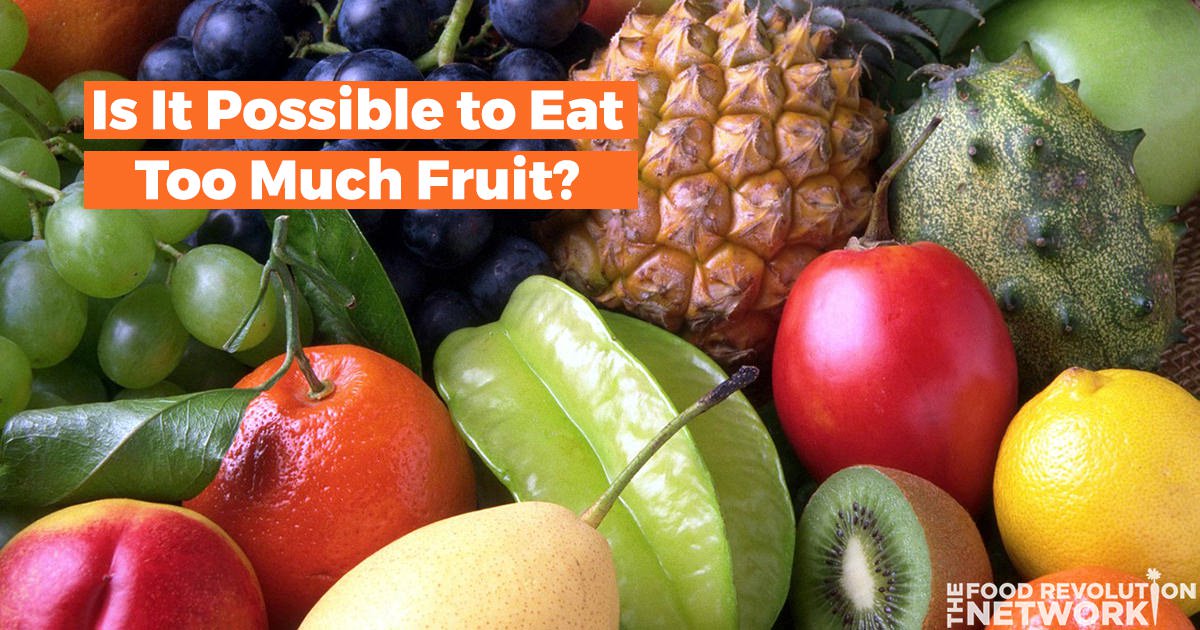 In my video, If Fructose is Bad, What About Fruit, I explored how adding berries to our meals can actually blunt the detrimental effects of high glycemic foods, but how many berries?

The purpose of one study out of Finland was to determine the minimum level of blueberry consumption at which a consumer may realistically expect to receive antioxidant benefits after eating blueberries with a sugary breakfast cereal.

If we eat a bowl of corn flakes with no berries, within two hours, we create so many free radicals, it puts us into oxidative debt. The antioxidant power of our bloodstream drops below where we started from before breakfast, as the antioxidants in our bodies get used up dealing with such a crappy breakfast.

What About Fruit for Diabetics?

Most guidelines recommend eating a diet with a high intake of fiber-rich food, including fruit, because they’re so healthy — antioxidants, anti-inflammatory, improving artery function, and reducing cancer risk. However, some health professionals have concerns about the sugar content of fruit and therefore recommend restricting the fruit intake.

So let’s put it to the test! A study from Denmark put diabetics into two randomized groups: one was told to eat at least two pieces of fruit a day, and the other told at most, two fruits a day.

The reduce fruit group indeed reduced their fruit consumption, but it had no effect on the control of their diabetes or weight. So the researchers concluded, the intake of fruit should not be restricted in patients with type 2 diabetes.

An emerging literature has shown that low-dose fructose may actually benefit blood sugar control. Having a piece of fruit with each meal would be expected to lower, not raise the blood sugar response.

The threshold for toxicity of fructose may be around 50 grams. The problem is that’s the current average adult fructose consumption. So, the levels of half of all adults are likely above the threshold for fructose toxicity, and adolescents currently average 75. Is that limit for added sugars or for all fructose? If we don’t want more than 50 and there’s about ten in a piece of fruit, should we not eat more than five fruit a day?

Quoting from the Harvard Health Letter, “the nutritional problems of fructose and sugar come when they are added to foods. Fruit, on the other hand, is beneficial in almost any amount.”

What Do They Mean? Can You Eat Too Much Fruit? How Much Is Too Much?

It’s actually been put to the test.

Seventeen people were made to eat 20 servings a day of fruit. Despite the extraordinarily high fructose content of this diet, presumably about 200 g/d—eight cans of soda worth, the investigators reported no adverse effects (and possible benefit actually) for body weight, blood pressure, and insulin and lipid levels after three to six months.

More recently, Jenkins and colleagues put people on about a 20 servings of fruit a day diet for a few weeks and found no adverse effects on weight or blood pressure or triglycerides, and an astounding 38 point drop in LDL cholesterol.

There was one side effect, though. Given the 44 servings of vegetables they had on top of all that fruit, they recorded the largest bowel movements apparently ever documented in a dietary intervention.

From the editor: Here’s a short video from Dr. Greger discussing how sugar in its natural form (fruit) and industrials sugars, including fructose, table sugar, and high-fructose corn syrup, have a different effect on the body.

The Difference Between Sugar in Fruit and Added Sugar

Absolutely, we should stuff our face with as many fruits and vegetables as possible. But indeed, we need to eliminate or reduce, on a day-to-day basis, our consumption of added industrial sugars.