Search Join Us
Food Revolution Network
Search
Join Us
56,166 Readers
Food and Health Food and the Environment Future of Food

The Truth About Palm Oil: The Dark Side You Probably Don’t Know 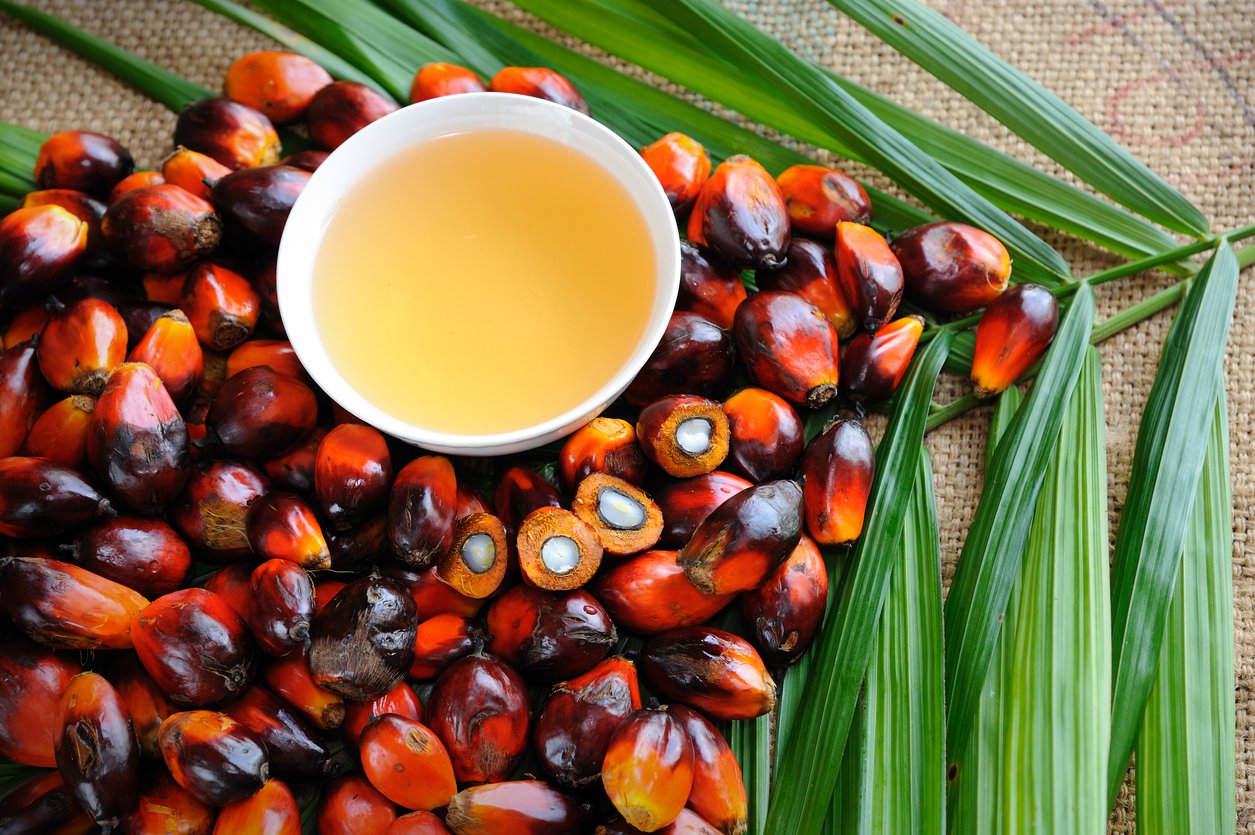 Palm oil is in food and other products around the world. But why is it bad? And does sustainable palm oil exist? Get answers below! This is an issue that has serious impacts for people — and the environment.

Palm oil is the most consumed oil in the world. And if you eat packaged foods today, you’re very likely consuming refined palm oil — whether you know it or not.

In fact, about 50% of the packaged foods in your typical supermarket contain palm oil.

Why is palm oil used so widely?

Because it’s incredibly low in cost. Also, some people see it as a healthy alternative to trans fats and animal fats. (I’ve even heard it called a superfood. Although usually only by people who profit from selling it.)

But there’s a dark side to the palm oil industry that’s hidden from most of our eyes.

What Is Palm Oil?

People have valued oil palms for thousands of years. Ancient cultures pressed the fruit to get the energy-rich oil. Archaeologists have even discovered palm oil in Egyptian tombs. And written records describing it date back to the 15th century.

How Is Palm Oil Produced?

Today, Malaysia and Indonesia are the world’s largest producers and exporters of palm oil.

According to the Malaysian Palm Oil Council, the oil palm is the most efficient oil-bearing crop in the world. It requires only 0.26 hectares (about 0.6 acres) of land to produce one ton of oil. Soybeans, in contrast, need about 10 times as much land to produce a ton of soybean oil.

Workers, often children, use heavy extension poles to reach the palm fruit. They cut bunches off the tree and leave them along the road or field for later pick-up.

When trees are young, harvesting the fruit is manageable. But this process grows ever more strenuous as the trees grow larger. (A mature oil palm tree can grow up to 70 feet tall.)

After two or three decades, the trees get too tall for the fruit to be reachable. And they’re cut down to make room for planting new oil palms. (Left alone, oil palm trees can live much longer than this, even up to 200 years.)

What Is Palm Oil Used for?

Some companies use palm oil to make biofuel, detergents, and cosmetics. But about 85% of palm oil is produced for food. And around the world, the use of this oil is increasing.

It commonly appears in cooking oils, shortening, and margarine.

Palm oil does contain some healthy nutrients. But there’s more to the story.

For instance, it offers beneficial:

And yet, by no means should palm oil be considered a health food. And it certainly isn’t necessary in your diet.

Is Palm Oil Bad for You?

“In the same way that the overproduction of corn in the United States led to rivers of high-fructose corn syrup and endless conveyor belts of fast food, so the palm-oil bonanza has enabled the creation of ever-greater amounts of deep-fried snacks and fast and processed foods — with potentially catastrophic implications for global health.”

Palm oil contains about 50% of a type of saturated fat that’s thought to be healthier to consume than trans fats and factory farmed animal fats. But you can eat many other superior foods to get many of the same nutrients.

And when palm oil is refined at high temperatures, the European Food Safety Authority (EFSA) warned that it leads to the creation of contaminants in the oil, which may contribute to kidney toxicity or cancer.

Is Palm Oil Destroying the Environment?

Despite the health risks, the greatest controversy over palm oil surrounds the industry’s impact on the environment.

Oil palms are tropical plants that thrive in the wet, warm climate of tropical rainforests. Sadly, these rich, biodiverse ecosystems are being destroyed to make way for oil palm plantations — at alarming rates.

According to the nonprofit organization, Rainforest Rescue, oil palm plantations are the leading cause of rainforest destruction in Malaysia and Indonesia. They produce 90% of the world’s palm oil.

Every hour, an estimated rainforest acreage equivalent to 300 soccer fields are cleared. And if deforestation continues at current rates, 98% of rainforest in Indonesia may be destroyed by 2032.

What’s more, nearly half of the oil palm plantations in Southeast Asia exist on areas that were forests only decades ago.

The loss of rainforests threatens the environment of the entire planet. And this gives rise to a chain of devastating consequences.

Another dark side to the palm oil industry is that it’s ruining the lives of people who depend on rainforests for their livelihoods.

The industry refutes this by stating that they provide work for local people, which is true. Up to two million Indonesians work in the palm oil industry. However, the laborers are subject to low wages for long hours of grueling work. And reports of forced labor and slavery are persistent and more than disturbing.

Child labor is another serious problem. The industry often compels children of palm workers to work, treat them poorly, and pay them dreadfully low wages (if they pay them at all).

The industry also violates the rights of indigenous peoples by seizing extensive tracts of their land.

If you like the idea of adding palm oil to your diet or personal care products but don’t want to contribute to environmental destruction and violation of human rights, you may think a sustainable variety is the answer.

But unfortunately, “sustainable palm oil” is just as controversial as the industry as a whole.

The Roundtable on Sustainable Palm Oil (RSPO) formed in 2004 as a way to support the growth of sustainable oil palms and for consumers to identify sustainable products.

Unfortunately, the founders were industry leaders. Today, palm oil from many of the RSPO-certified companies is still causing the same problems as non-certified oils.

A study published in Environmental Research Letters actually found “no significant difference” between certified and non-certified plantations for any of the sustainability outcomes they measured. For instance, orangutan populations declined at similar rates whether they lived near RSPO-certified or non-certified oil palm plantations.

Researchers have found that so-called “sustainable” palm oil is often still associated with the recent loss of rainforests and habitat degradation. In fact, both RSPO and POIG allow the clearing of forests as long as they’re not identified as areas with high conservation value or high carbon stock.

Sadly, the term “sustainable palm oil” is often misleading and even a form of “greenwashing.”

It leads consumers to think their oil is safe for the environment. But the reality is, it’s still contributing to the destruction of rainforests and the exploitation of workers.

Some companies do produce palm oil without deforestation or draining of peatlands.

UCS developed a scorecard that ranks companies according to their commitment to using palm oil that is free from deforestation, peatland destruction, and other measures such as traceability and transparency.

Theoretically, it’s possible to produce this oil without deforestation. But due to complex supply chains, it’s difficult to guarantee that products claiming to be deforestation-free were actually produced that way.

A better option is to support companies not using it in the first place.

For example, U.K. frozen food chain Iceland became among the first to stop using palm oil in their products. The move took effect at the end of 2018.

They made an extremely moving animated ad describing their choice. When I saw their powerful ad, and shared it with my kids (who were also deeply touched), I decided I needed to write this article.

Are There Any Bright Spots in the Palm Oil Industry?

Yes, a couple of bright spots do exist in the industry.

Notably, there is Palm Done Right. The organization has developed a set of standards to produce palm oil organically, using the principles of regenerative agriculture.

Most oil produced via the Palm Done Right principles comes from small family farms in Ecuador. They regenerate land that is already degraded or convert existing palm farms to organic. And to reduce the risk of toxic contaminant formation, they also refine the oil at lower temperatures.

Fair for Life is another standard to look for. They ensure the protection of human rights and respect for local ecosystems, biodiversity, and sustainable agriculture practices.

In short, if you choose to use palm oil, look for unrefined red palm oil. (It is far less highly processed and has more valuable nutrients left in it.) And look for oil produced according to the following standards:

As for what to avoid, you might want to steer clear of the heavily refined palm oil found in most processed foods. This goes for personal care products and cosmetics as well. You can find it on ingredient labels under the following names:

Focus on fresh, locally grown foods first and foremost. And if you’re going to eat processed foods, look for those made without this controversial oil.

Or if you’re concerned about human rights, tropical rainforests, orangutans, or the future of our climate, you now have a few more good reasons to ditch processed foods altogether.