The Truth About Hot Dogs 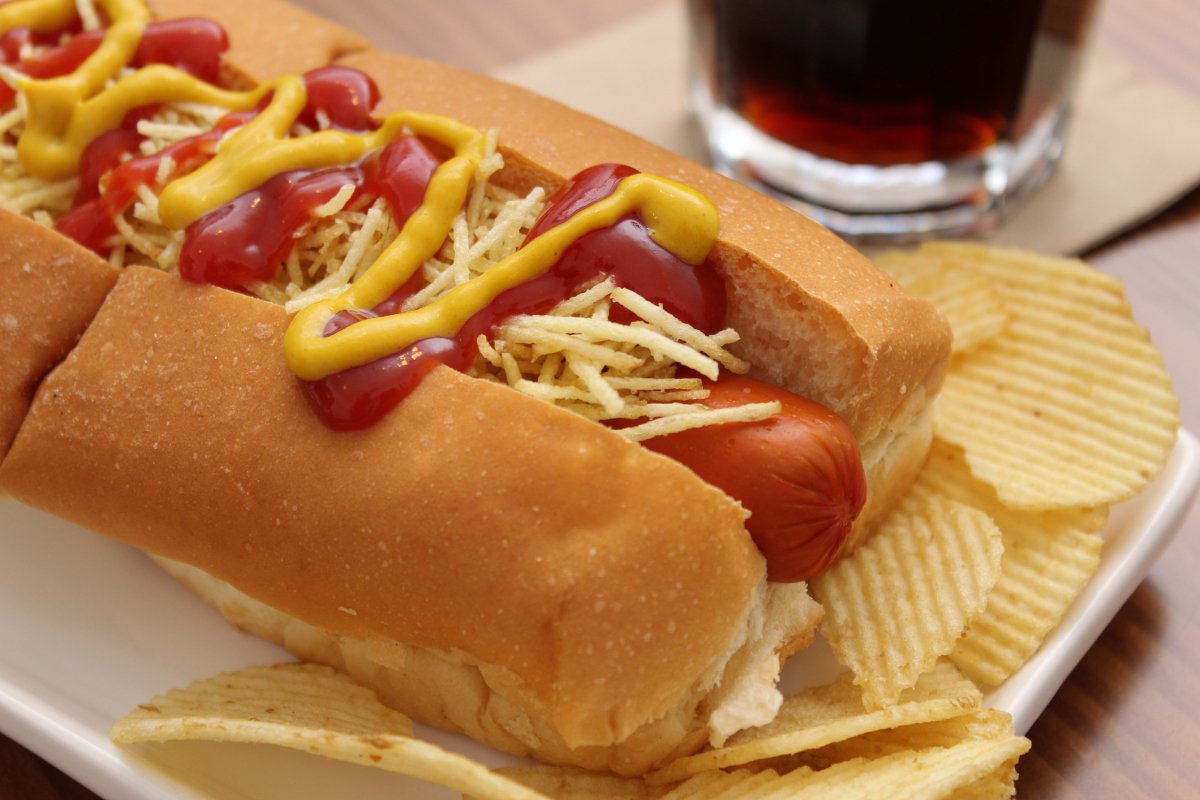 To many people, hot dogs are as American as apple pie and baseball. According to the National Hot Dog and Sausage Council, Americans eat 818 hot dogs per second between Memorial Day and Labor Day, which adds up to about 7 billion hot dogs. Hot dogs are cheap, easy to grill, convenient to eat one-handed, and associated with good times and great condiments. And a lot of people love how they taste.

But just because hot dogs are so popular doesn’t mean they’re healthy. What’s the truth? Should you be eating hot dogs in moderation, or not at all? What does the science say?

This article explains everything you need to know about hot dogs and their many drawbacks. Spoiler alert: after you read this, you may never touch another meat-based hot dog. Luckily, there are lots of healthy alternatives, which I’ll share at the end.

The Rise of Hot Dogs

Hot dogs have likely been around since the time of Nero, the Roman Emperor — possibly even before. One day, the story goes, Nero’s cook cut open a roasted pig and found that its intestines were empty. He stuffed the intestines with ground meat, wheat, and spices to create the first sausage.

Fast forward almost two millennia, hot dogs reached Germany and eventually America. An enterprising German immigrant introduced them to New York City in the 1860s giving them the visually suggestive name “dachshund sausages.” While this name referred to the shape of the meat, it may have given people the wrong idea about its source: it’s possible that people called them “hot dogs” because they assumed that dog meat was the main ingredient.

The bun came later, possibly invented by a sausage vendor in St. Louis in the 1880s who found it cheaper to hand out hot dog shaped bread to keep his customer’s hands clean than his prior solution, white gloves.

How Are Hot Dogs Made?

The thing to remember about hot dogs, as with most other processed meats, is that they are made up of the parts of the animal that are left over once the choice cuts are used up. And as with almost all animal products consumed in the industrialized world, they come from animals that were raised in cruel and filthy factory farms.

Trimmings, or the remains of an animal left after cutting up pork chops and steaks, are raked into stainless steel cases. These trimmings are then chopped, mixed with water, corn syrup or sorbitol, salt, food starch, and liquid smoke. All of these ingredients are blended together. Different spices are then added, depending on where the hot dogs will be sold.

To boost the color of the hot dogs, and improve their shelf life, sodium nitrate is added as a preservative. Sodium diacetate, sodium erythorbate, and any number of other chemicals may also be added The mixture is then funneled into a blended hot dog mush. To form the hot dog links, the mush is put into a casing, cut, and baked.

7 Reasons Why Hot Dogs Aren’t Good For You

Here are 7 reasons why hot dogs are detrimental to your health.

1) They can increase your risk for certain cancers.

The World Health Organization (WHO) has categorized processed meats, like hot dogs, as Group 1 carcinogens. What does this mean? Group 1 carcinogens are a category of substances that have the strongest evidence of being cancer-causing in people. Other things that fall into this category include tobacco and asbestos.

The International Agency for Research on Cancer (IARC) conducted a review of over 800 studies from 10 different countries to look at the relationship between eating processed meats and colorectal cancer. The researchers found that eating 50 grams of processed meat daily, or just one hot dog, can increase your risk of colorectal cancer by 18%.

A child’s risk of developing a brain tumor from eating one hot dog per week is seven times higher than their risk for developing one as a result of regularly using a cell phone. Eating hot dogs also increases the risk of childhood leukemia by 950%.

Eating processed meats has also been shown to increase the risk of bladder, breast, and stomach cancers.

2) They aren’t good for your heart health.

Hot dogs are high in saturated fat and sodium. Just one hot dog can contain over a quarter of your day’s sodium allowance and over 14 grams of fat.

Another 2014 study in Circulation looked at data from over 37,000 Swedish men aged 45 to 79 years who had no history of heart disease. Men who ate at least 75 grams of processed meat per day had a 1.28 higher risk of heart failure and 2.43 higher risk of death from heart failure. Seventy-five grams is about one and a half hot dogs.

3) They can increase your risk for type 2 diabetes.

Every hot dog you eat increases your risk of type 2 diabetes. People who eat the most processed meats have approximately a 20 to 30% higher risk of diabetes for every two-ounce serving of processed meats per day. That’s just one hot dog per day — hardly a remarkable amount.

Hot dogs are also high in nitrates and nitrites, two nitrosamine-forming compounds which can damage the pancreatic cells that make insulin. The type of saturated fat in hot dogs may also contribute to insulin resistance.

4) They are at high risk for food recall.

Hot dogs have been recalled for many reasons. Some hot dog recalls have been due to contamination of Listeria, metal shards, and bone fragments. These kinds of contaminants may not be all that surprising given hot dogs ingredients.

People find very strange, gross, and even dangerous things inside their hot dogs on a pretty regular basis. And these incidents don’t always trigger national food recalls, or even make much of a news splash. Here’s a short list: rubber bands, silverfish, plastic, hair clumps, glass, razor blades, insects, buttons, and pills. There may also be other, unexpected animal parts used in the making of hot dogs. Pig snouts, animal organs, intestines, and skeletal muscle are apparently fair game.

6) They may cause allergic reactions.

Hot dogs may contain ingredients that cause some people to have an allergic reaction. This, too, isn’t really surprising given that hot dogs contain a laundry list of ingredients.

Many people are allergic to the types of meat trimmings used in hot dogs, food dyes like tartrazine, or additives like nitrates and nitrites.

Most of us probably aren’t eating hot dogs on a heaping plate of raw kale with a side of mixed berries.

We like our hot dogs on a heavily processed, white bun. And we top them with condiments that contain high amounts of sugar, sodium, and potentially harmful food dyes. We’ll add even more saturated fat, sugar, and sodium to our plate in the form of sides like potato chips and sugary soft drink beverages.

If you have a hankering for a hot dog, the good news is that there are some better alternatives available.

“Not As Terrible” Conventional Hot Dogs

If you absolutely can’t stand the thought of parting with animal-based hot dogs, you can mitigate your risk in a couple of ways.

First, try to find locally-sourced hot dogs, perhaps produced on a local organic farm. Ask the farmer about ingredients and their manufacturing process. Look for uncured hot dogs, which don’t contain nitrates. To ensure that you’re not getting a product full of trimmings and various animals, look for hot dogs that state they are “100% chicken” or “100% beef.”

Read the ingredient list thoroughly for things you might want to avoid. For example, MSG, artificial or “natural” flavorings, preservatives, and high fructose corn syrup or other sweetening agents.

And remember the dose-response effect: the fewer hot dogs you eat, the lower your risk of cancer, heart disease, diabetes, allergic reactions, and those alarming rubberband and glass sightings.

You can easily find these hot dogs at most stores today. Many varieties use peas, soy, or gluten as their main source of protein instead of meat. It’s true that plant-based hot dogs provide a more sustainable, more ethical, and less carcinogenic option than meat hot dogs. However, most of the fake meat dogs on the market are still highly processed and are far from being true “health foods.”

I have yet to see carrot dogs sold in stores, but you can easily make them at home. And they’re really delicious! All you do is peel some large carrots, boil them until soft, marinate them for several hours in the fridge, and roast them in the oven. You can serve them with all of your favorite hot dog toppings.

Here’s a great recipe to make plant-based hot dogs at home, by Fat-Free Vegan, though it is high in gluten. In fact, it uses vital wheat gluten as the main protein source and a binding agent, along with oats, flax seed, and a variety of seasonings. Make sure to choose an organic variety of vital wheat gluten in order to avoid GMOs and glyphosate exposure.

Traditional toppings for hot dogs include condiments that are high in sugar, sodium, and may contain artificial colorings and preservatives.

And that old favorite, mustard, is one of the cleanest condiments you can find at the supermarket. Look for varieties without fat and with as few ingredients as possible.

Hot Dogs Are Not a Health Food

Traditional hot dogs have no health benefits, and when it comes to your health, they should probably be sold with warning labels. But the good news is that if you have a hankering for a hot dog, there are plenty of healthier alternatives that you can feel good about enjoying!

Tell Us in the Comments:

Healthy Starters and Appetizers for All Occasions

What is Sulforaphane — And Why Is It so Good for You?

Practicing Gratitude on Thanksgiving is a Powerful Action for Health & Happiness

7 Plant-Based Dinner Recipes That are Easy Enough for Beginners