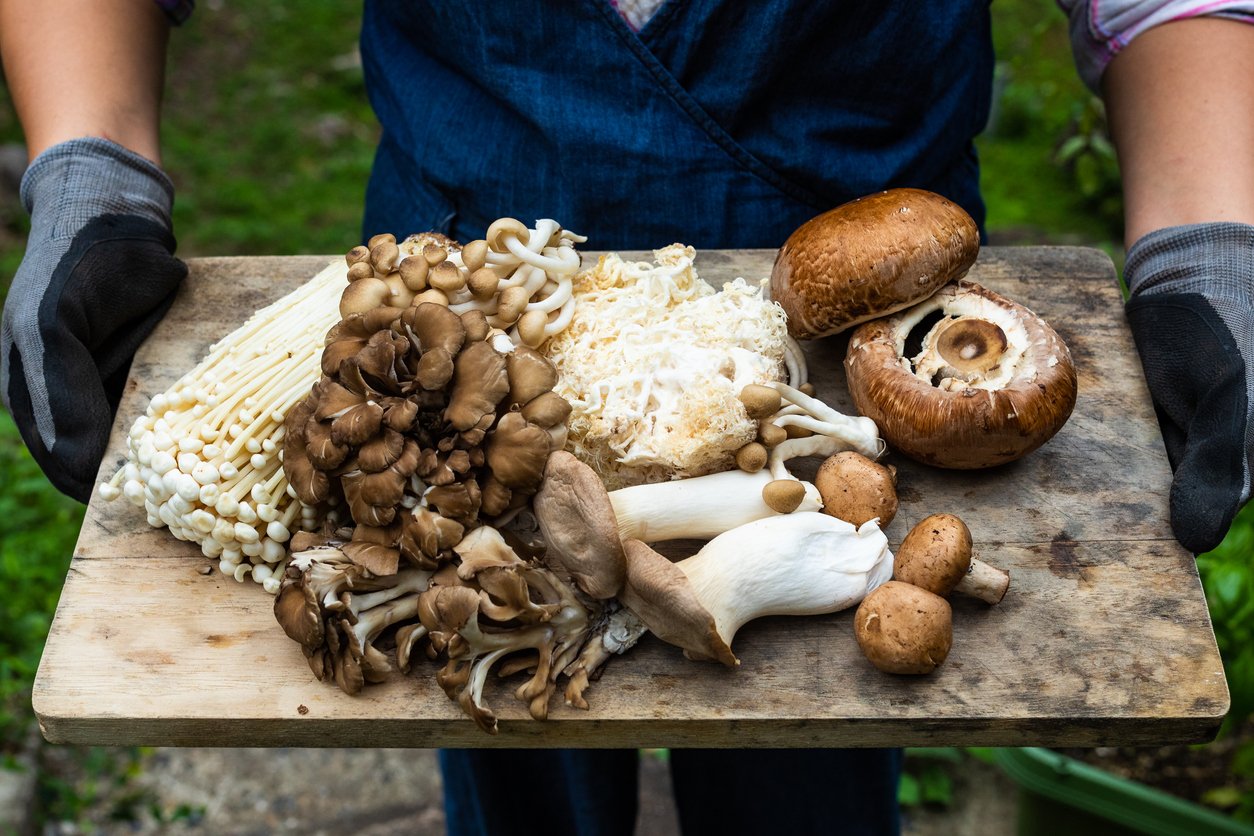 When someone asks you if you like mushrooms, a lot of things can come to mind. Are they talking about culinary mushrooms like portobellos and whether you like them in your stir-fry? Do they mean magic mushrooms, like the hallucinogenic psilocybin? Or did they actually say “much room?” and they’re asking if you’re satisfied with the size of your car?

Which reminds me: How do you get into the mush-room?  Ring the porta-bella!

When it comes to mushroom talk, it could be wise to clarify. Because there’s another thing someone could be talking about: medicinal mushrooms.

(That’s a lot of benefits. And you get them whether or not you even know what all those words mean.)

But there’s more. Mushrooms are also incredibly gentle on the planet. They require very little energy and water to grow, and their growing medium is compostable. As well, their growth footprint is tiny. Over a million mushrooms can be produced annually in a one-acre space. Quite simply, they’re one of the most sustainably grown foods in the human diet.

Unfortunately, not many people are aware that medicinal mushrooms even exist, never mind the powerful health benefits that they can offer. There are over 50,000 species of mushrooms — and those are just the ones that have been studied and written about! So, you can understand why it may be a bit difficult to keep track of them.

This is why I’ve chosen five of the most beneficial medicinal mushrooms out there, so that you can learn more about them, along with how they could benefit your health if you choose to give them a try.

So, What are 5 of the Best Medicinal Mushrooms?

As mentioned above, there are countless species of mushrooms out there, and medical mushroom species are no exception. It was a bit of a challenge to narrow down the list to just five, but I’ve selected the mushrooms included here because they are well-studied and may specifically help with mental clarity, longevity, and immunity.

So, keep reading to learn about five of the most powerful medicinal mushrooms out there, along with how they can benefit your health.

Turkey tail mushrooms are multicolored fungi that can grow on both standing and fallen trees. They grow in several parts of the world, including the United States.

Turkey tail are typically disc-shaped and — as you may have guessed — often resemble a turkey’s tail.

Also known by the names Trametes versicolor or Coriolus versicolor, these mushrooms have been used for centuries as a health supplement for a wide range of ailments and preventative measures.

One of the most prominent and well-known benefits of turkey tail is its immune-boosting properties, along with its ability to help ward off certain chronic diseases.

This is largely due to compounds found within turkey tail called polysaccharopeptide (PSP) and polysaccharide-K (PSK) that may inhibit the growth of cancer cells, potentially leading to increased chances of beating the disease. This is why some researchers are now suggesting it may be wise to take turkey tail when undergoing chemotherapy and other conventional cancer treatments to complement these therapies.

In addition to this, the PSP in turkey tail can benefit gut health by feeding and promoting the growth of beneficial bacteria.

All in all, turkey tail mushrooms may be able to help stave off disease by boosting the immune response and inhibiting the proliferation of cancer cells.

That’s not the most appealing of names, I know, but this unique mushroom, Antrodia camphorata, has been widely used in traditional Chinese medicine to treat liver problems, food and drug intoxication, abdominal pain, hypertension, and itchy skin, so I’ll give it a pass.

Like most mushrooms, its benefits are thanks to a rich diversity of bioactive compounds. Stout camphor fungus contains over 78 compounds, many of which have anti-inflammatory, antioxidant, and detoxifying effects.

As such, research has found it to support the immune system, bolster liver health, and protect the health of the brain.

What does a fast mushroom car say?

The reishi mushroom — also known as Ganoderma lucidum or lingzhi — likes to grow in hot and humid locations throughout Asia. It’s been a staple in Eastern medicine for more than 2,000 years.

Reishi mushrooms deliver a rare collection of bioactive compounds that appear to provide important benefits to human health. One of the most well-known of these benefits is the ability to support the immune system. Research tells us that reishi mushrooms can boost the number of white blood cells (alone and when combined with other medicinal mushrooms), enhance their efficiency, and increase their activity — which can help the immune system to fight disease-causing cells.

Reishi mushrooms may also have benefits when used in conjunction with other forms of cancer treatment. A meta-analysis conducted by a team of researchers from Australia, Argentina, and China concluded that patients who were given reishi extract in their anticancer regimen were 1.27 times more likely to respond to chemotherapy or radiotherapy than those without it.

And other studies have suggested that supplementing with this mushroom could improve symptoms of depression, as well as boost energy levels.

Additionally, other research has found that reishi mushrooms may promote healthy cholesterol levels and act as a powerful antioxidant.

King trumpet mushroom, often referred to as Pleurotus eryngii, is a large form of the popular oyster mushroom that is native to Europe and Asia.

Research has shown that oyster mushrooms of all kinds may help to bring down chronic inflammation, and potentially reduce the risk of inflammation-related disease and colon cancer.

King trumpet has also been shown to protect against the growth of disease-causing cells thanks to the wide range of beneficial compounds it contains.

Although maitake mushrooms grow in many parts of the world — including the United States — they’ve historically been most popular in Japan and China, where they’ve been used for thousands of years to support health, vitality, and longevity.

And it turns out that there’s some solid science to back up the benefits of the maitake.

Research has shown that maitake mushrooms could be useful in helping to prevent or even treat cancer.

Other studies have found that maitake can also support the health of the heart by lowering cholesterol and stabilizing blood pressure, all while promoting healthier blood sugar levels.

Maitake mushrooms are also known as adaptogens. This means they could help the body respond to mental and physical stress, regulating bodily systems to help return to and maintain homeostasis.

Mushrooms for Longevity and Well-Being

Medicinal mushrooms have been used in traditional medicine for thousands of years, and now modern science is finding that a few of them, in particular, could make a real contribution to helping us be healthy, strong, and happy.

So the next time someone asks you if you like mushrooms, you might want to tell them what you’ve learned today about medicinal mushrooms!

Or you could share this rather poor excuse for a joke:

Editor’s Note: Our friends at Purality Health have a formulation they call Mushroom MindBoost that infuses all five of the mushrooms listed above with their patented micelle liposomal formula. This means you get their potent and beneficial compounds in a highly absorbable form so that your body can actually take them in and use them. And we think it tastes delicious! Learn more about Mushroom MindBoost’s formula and take advantage of an exclusive offer for FRN members by clicking here. (If you make a purchase using this link, Purality Health will make a contribution in support of FRN and our mission. Thank you!)