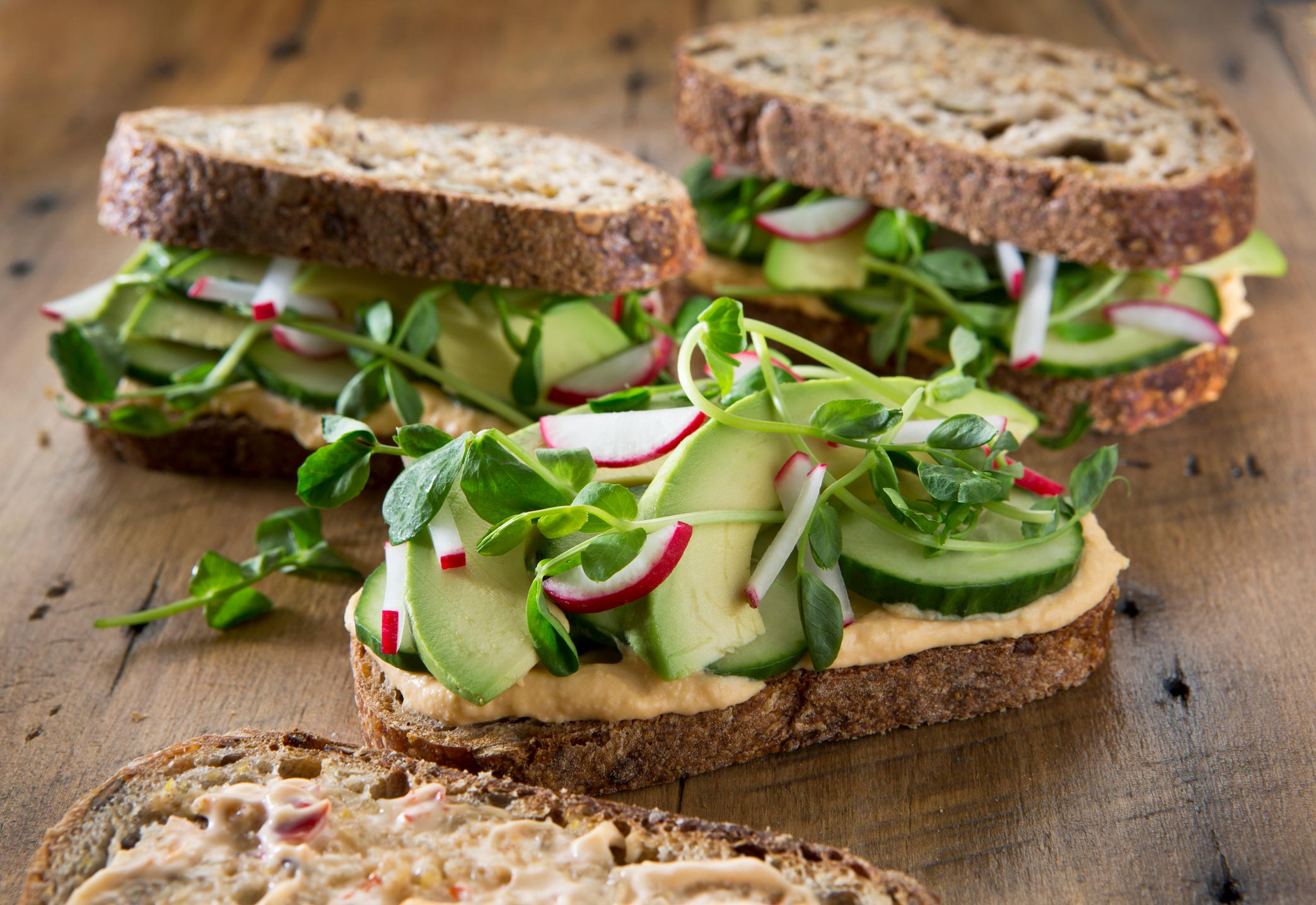 In an intriguing historical case of “alternative facts,” the reputation of a prominent English nobleman hangs on the origin of one of the world’s most popular meals: the sandwich. We’ll get to that juicy backstory soon. For now, the important thing is that sandwiches are one of the world’s most popular meals — even vegan sandwiches. Pretty much every culture has some version of the sandwich, whether the classic “stuff between two pieces of bread,” or a variation like a wrap or bread-plate. It seems that almost everyone likes eating with their fingers.

Sandwiches are popular for lots of reasons. For one thing, they’re easy to make. Many a young chef has gotten their start putting together their own PB&J sandwiches for school lunch. And they quickly discover the ideal ratio of peanut butter (or other nut butter) to jelly, as well as how much they can slather on the bread before it starts oozing out the sides. They can be put together quickly, without needing a lot of advanced planning. And they’re the ultimate in portability — great for brown bag lunches and road trips.

You can stuff a lot of leftovers into your sandwiches without anyone complaining. They’re wonderful ways to sneak a lot of produce into people’s diets, whether in the form of chopped or sliced vegetables or blended into the spread that goes on the bread. And there’s nothing fancy or snooty about the humble sandwich. People of all ages can get behind this brilliant design. Kids love them, partly because of the tasty fillings, and partly because sandwiches are just plain fun to hold and eat.

Since the design of the sandwich is so basic, you have a nearly infinite palette upon which to innovate. Therefore, it’s not as difficult as you might think to come up with a vegan sandwich.

A Brief History of the Sandwich

Now back to that historical controversy. The sandwich got its name from John Montagu, the 4th Earl of Sandwich, who lived in the 18th century. He requested a meal that he could eat without utensils, but which would not dirty his hands. The question is, What was the Earl’s reason for this request?

The popular theory is that the good Earl was an incurable gambler and needed a way to keep his energy up and his appetite at bay while persisting at the card table. He instructed his valet to bring him meat in between slices of bread, and the innovation caught on among his fellow peers, who began asking for their meat “the same as Sandwich.” I like to think that some of his card-playing pals included the Duke of Hoagie and the Countess of Dagwood.

This account comes from a book written by a French travel writer who may have, shall we say, spiced things up in pursuit of sales. A contemporary biographer of the Earl asserts that it was his commitment to the British Navy, as well as other political and artistic endeavors, that kept the man at his desk without time to break for a fancy meal.

And as an Earl, Montagu would have dined in a formal manner indeed, at a dinner table complete with multiple utensils, servants, and many long, drawn-out courses. Maybe a simpler explanation was that the good Earl couldn’t remember which was the salad fork and which was the soup spoon.

Before we get too hung up on lionizing John Montagu, it’s important to remember that while the name is attributed to him, the concept of the sandwich goes far back in history, and its appeal spans the globe.

Middle Eastern and Mediterranean cultures had similarly innovated the use of bread to transport, protect, and hold food together while maintaining clean hands. These cultures make bread, not in loaves, like the European tradition, but in flat rounds formed by pressing a round of dough onto an upside-down pan heated by wood or coals. Pita is one example. The dough puffs as it cooks, making a bubble inside that can be filled with lots of yummy stuff. Another Middle Eastern bread, lavash, is thinner than a pita, and unleavened, so it doesn’t rise and produce a bubble. Instead, people use lavash as a wrap, or they break off pieces to dip into stews. Both methods eliminate the need for washing utensils, a good thing in a region where water is often hard to come by.

The first recorded sandwich in history comes from the Middle East. According to the Passover Haggadah, the sage Hillel combined sweet and bitter foods between two pieces of unleavened bread, starting a tradition that is honored by Jews to this day. The innovation to cut the intense bitter herb (often horseradish in modern households) with the fruit and nut-based charoset paste represents a spiritual approach to life, blending the painful with the pleasurable, and not trying to run away from one in favor of the other.

While you can put just about anything between slices of bread, certain sandwiches have attained celebrity status in the culinary world. Some of the most popular and iconic sandwiches include:

As you may have surmised, the sandwich has not been a hotbed of health-food innovation over the centuries. Most feature meat and/or dairy as the main ingredient between slices of bread. And the spreads have often been meat or dairy-based as well. The bread is usually made from white wheat flour, with all the nutrients and fiber processed out to improve taste, mouthfeel, and shelf life.

But can those of us who aspire to healthy, cruelty-free lives modify the sandwich in a way that’s still tasty and convenient?

How to Healthify the Sandwich

With some basic substitutions and a little imagination, you can happily include the sandwich in your healthy, plant-based lifestyle.

It’s easy to replace the meat in sandwiches with vegetables. Some veggies are more meat-like than others in terms of shape, taste, and mouthfeel. Grilled zucchini, portobello mushrooms, seasoned jackfruit, and smoked eggplant can all provide a meaty mouthfeel, and, depending on seasonings, that savory umami flavor as well. If you need a closer analog, or don’t have time to prepare the vegetables in advance, you can always substitute plant-based meats. These vary widely in healthiness, with highly processed soy and gluten products at the low end, and variations made from tempeh or cooked jackfruit at the higher end.

If you want to upgrade the bread, you can easily sub in organic whole grain and sprouted grain varieties or artisan organic sourdough loaves from local bakers. You can also make your own bread, which gives you ultimate control over flavor and ingredient quality.

And these days, there are more gluten-free bread options than ever. California Country Gal makes a particularly delicious and nutritious collection of clean, grain-free bread and baking mixes. The mix recipes call for the addition of eggs, but if you’re vegan, you can give it a go with a variety of egg substitutes (some of which are suggested on the California Country Gal packaging).

I know that not everyone eats bread. For example, followers of Susan Peirce Thomson’s Bright Line Eating (BLE) protocol avoid all flour and sugar products. If that’s you, there are still sandwich options available. You can use lettuce, collard greens, nori seaweed, or thinly sliced jicama to wrap or hold the filling. Or, simply deconstruct the sandwich and serve the filling over a salad, cooked whole grain like quinoa or millet, or a baked or steamed sweet potato.

And if you can eat wheat, but want to flip the ratio of bread to filling in favor of the latter, you can always swap out loaf bread for the much thinner pita, lavash, wheat tortilla, or other wrap. There’s always a way to enjoy a healthy sandwich!

To give you some ideas and inspiration, here are five healthy plant-based or vegan sandwiches for the next time you’re too busy running the Navy or winning at cards to stop and eat a formal meal. 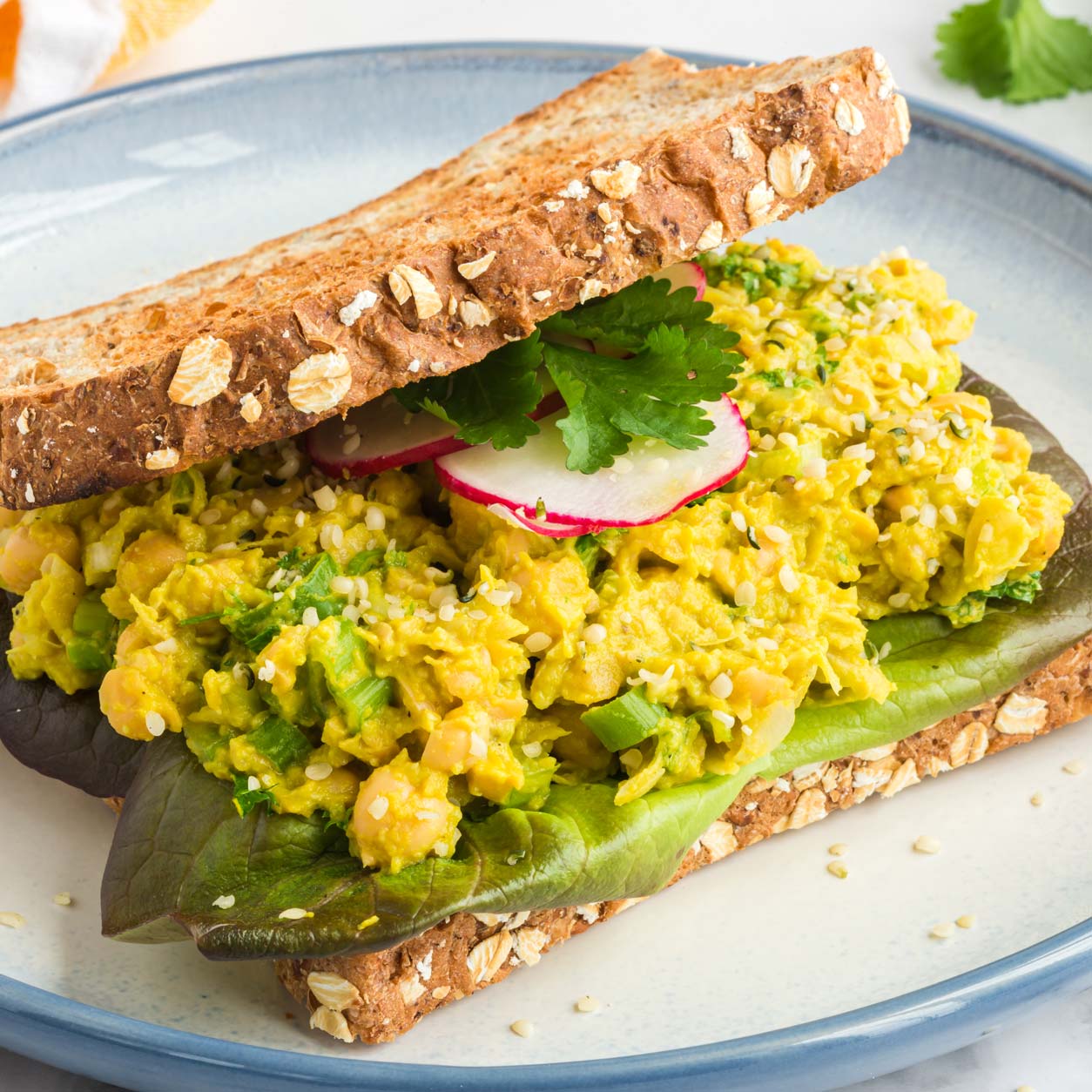 This one is sure to make frequent appearances in your recipe rotation. With ten grams of fiber from the avocado and fourteen grams of protein per cup of chickpeas, not to mention vitamins, minerals, and phytonutrients, this plant-based alternative to egg or tuna salad is the winning choice for flavor, texture, and nutrition. 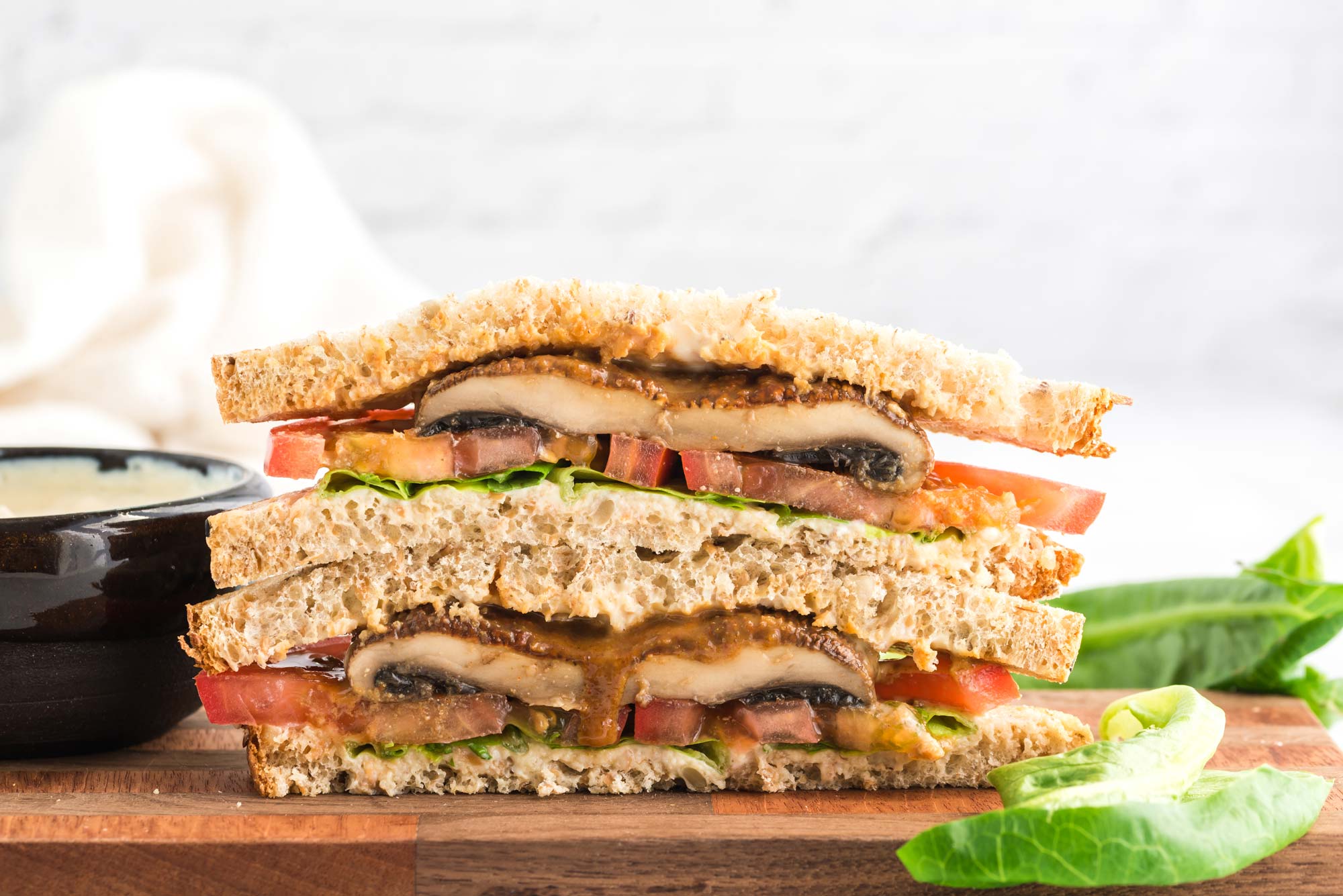 Their rich umami flavor is why mushrooms often replace meat in plant-based diets, not to mention their oh so satisfying texture. This sandwich may feel indulgent because it’s bursting with flavor, but feel good knowing that you’re feeding your body well. 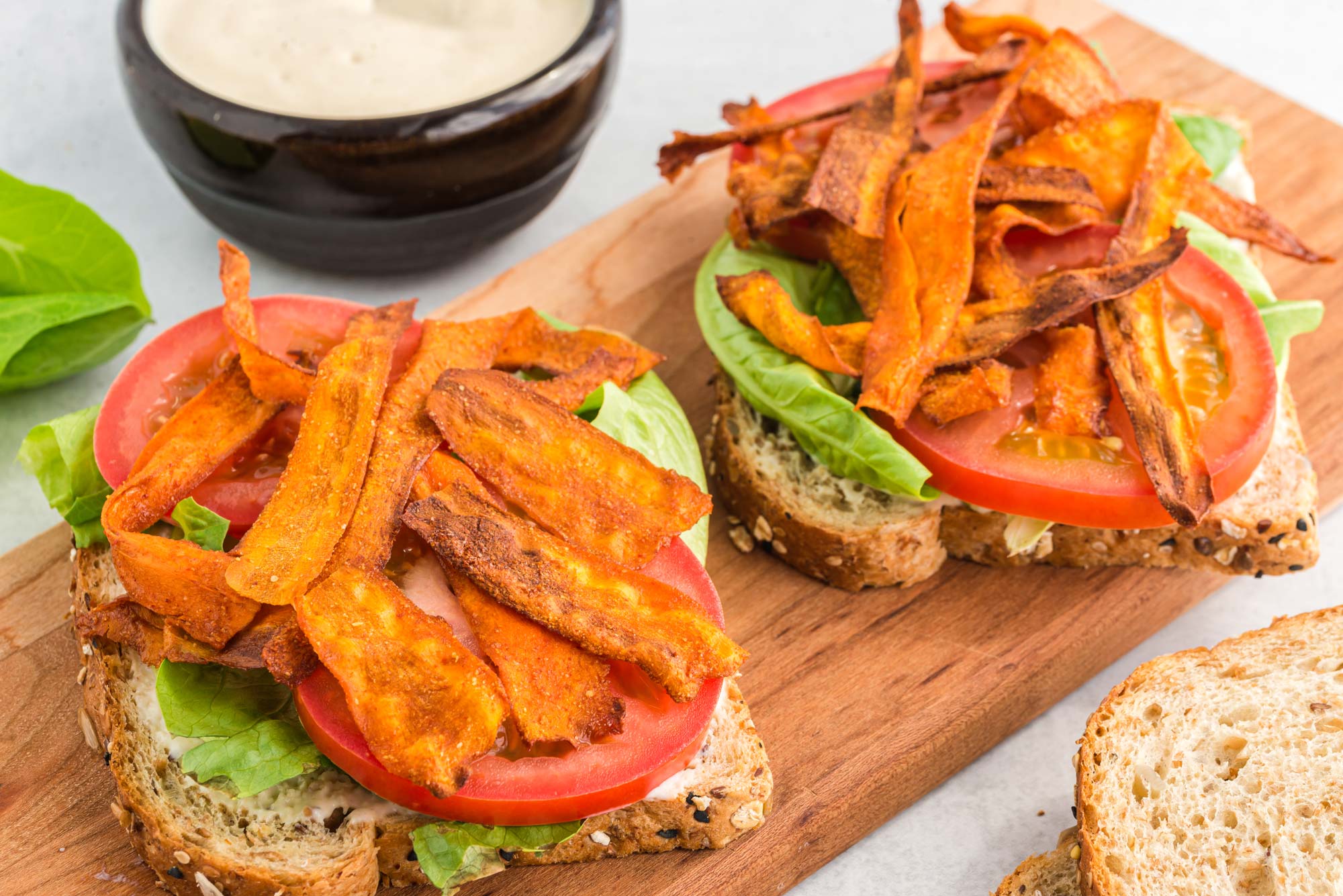 This tasty take on the traditional BLT has all the flavor and crunch, without the downsides! What’s more, it wins on nutrition and is simple to make. This sandwich is a fun and delicious way to use your garden carrots. 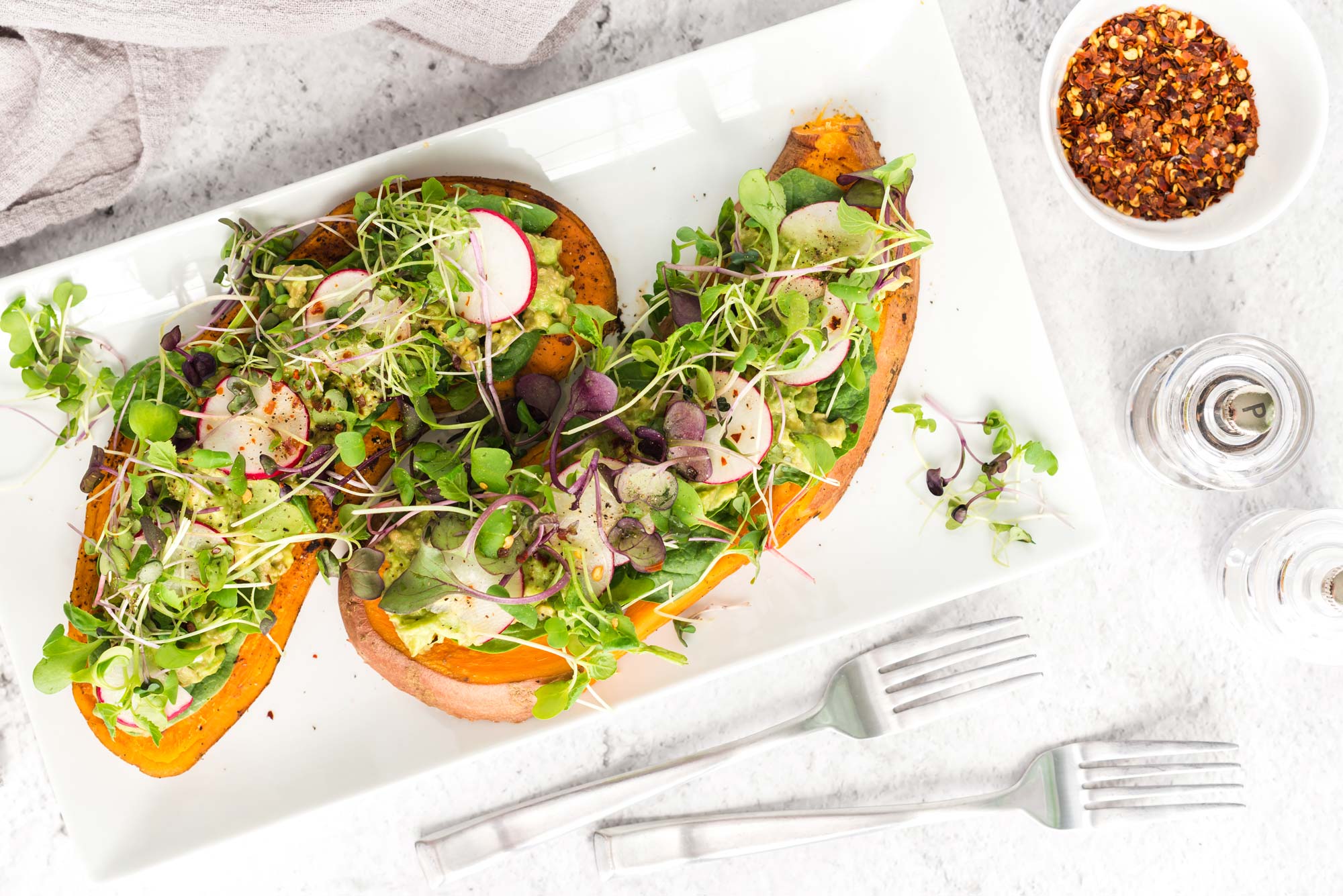 Replace your bread with nutrient-dense sweet potato and then add even more super nutritious foods like avocado, radish, onion, arugula, lemon, and oregano. Does it get any more healthful than this? The fact that it’s also ridiculously yummy makes it a perfect breakfast. 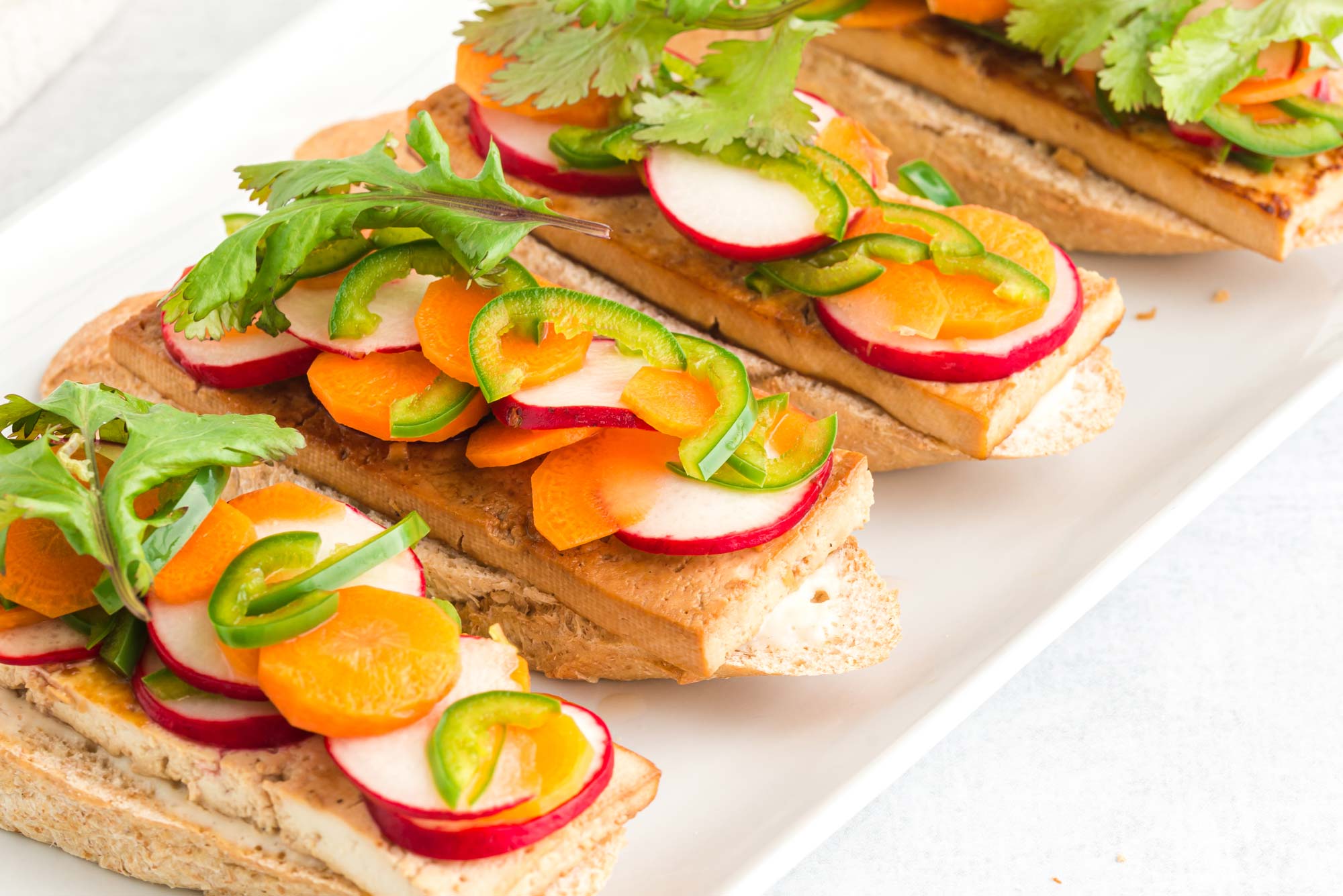 Bánh mì is the Vietnamese word for bread, but what you put in the middle is up to you! It typically includes something spicy, something pickled, and some kind of protein. Use this recipe–featuring organic tofu, and pickled radish, carrot and jalapeño–as a jumping-off point for countless combinations of this ever-popular sandwich.

Vegan Sandwiches for the Win

I think we’ve done it: reclaimed the beloved sandwich for those who choose to eat healthy and plant-based. By loading up on veggies, using condiments liberally, and choosing high-quality whole-grain breads or leafy wraps, we can enjoy all the varieties and flavors of the world’s favorite finger food.