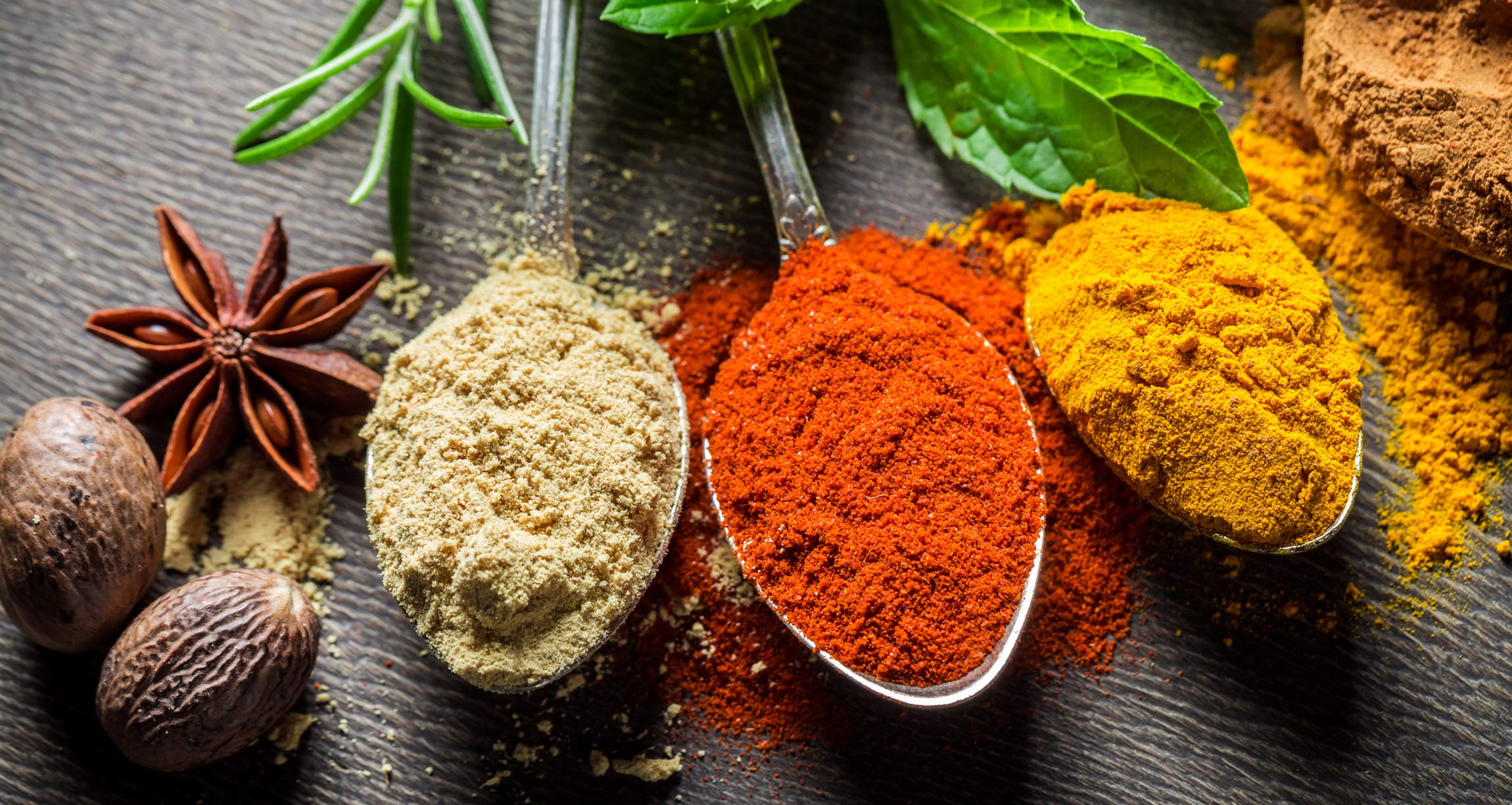 Every culture is defined, in part, by the spices used in its cuisine.

In India, there’s cardamom and cumin. In Italy, there’s basil and oregano. In Mexico, there’s chili, garlic, and cilantro. In Thailand, there’s lemongrass, sweet basil, and galangal. And in North America, there’s a bit of everything in the culinary melting pot.

But what is North America most known for adding to the mix? Salt, sugar, and fat.

Fortunately, you don’t have to live in Thailand to enjoy kaffir lime leaves. Or in Mexico to partake of green chilies.

Herbs and spices travel the globe. And they don’t just bring wonderful, mouthwatering bursts of flavor. They also bring stunning levels of nutrition.

Cooking with herbs and spices is an art form. Knowing which ones are especially good for you is science.

Learning about and using the following healthy spices can make a world of difference in your kitchen — and for your health.

Turmeric is a flavorful addition to sauces, curries, stir-fries, and casseroles.

Popular in India for more than 5,000 years, it’s widely thought to be one of the primary reasons that country has one of the world’s lowest rates of Alzheimer’s disease.

Turmeric is known for its bright orange color. In fact, it’s sometimes used as a coloring agent. The orange comes from a polyphenol called curcumin, which is something of a miracle compound.

Hundreds of studies have demonstrated that curcumin may help prevent or even reverse Alzheimer’s and other forms of dementia, reduce unhealthy levels of inflammation, protect against heavy metal toxicity, and even lower heart disease risk.

The average daily intake of curcumin in India is thought to be about 125 mg — the amount found in about a half-teaspoon of turmeric powder.

Research has found low rates of certain types of cancer in countries where people eat 100 to 200 mg of curcumin per day over long periods of time.

If a half-teaspoon of turmeric seems like a lot, you might consider a curcumin supplement. My personal favorite (made by a company that also supports Food Revolution Network) contains a potent, absorption-boosting breakthrough. You can see more about it (and get a special discount offer) here.

And one more tip: You’ll get better curcumin absorption if you combine turmeric with some black pepper and/or a bit of (healthy) fat.

Garlic can be chopped, minced, blended, or eaten as a powder.

It’s delicious in pasta sauces, soups, and almost any savory dish. People at the annual garlic festival in Gilroy, California, have even been known to make garlic ice cream, though I can’t say I recommend it!

Garlic is known for helping to ward off the bad guys. But instead of hanging it over your doorway to scare away vampires, you can eat it to fight off certain cancers.

The food found to be most highly associated with a statistically significant decrease in colon cancer was garlic. Women with the highest amounts of garlic in their diets had a 50% lower risk of certain colon cancers than women who ate the least.

Another study of 5,000 men and women, conducted in China over five years, found that a garlic extract was linked to a 52% reduction in stomach cancer rates, compared to a placebo.

Garlic has been rumored to help fight colds and flu. But is this folklore backed up by real-world science?

A team of researchers studied 146 participants, giving half of them a garlic tablet and half a placebo tablet, every day for three months.

Ginger is one of my favorite spices. It has a refreshing, clean, invigorating flavor. I love it in soups, stir-fries, casseroles, salad dressings, smoothies, stews, and desserts.

If you like, you can mix ginger powder or ginger tea with sparkling water and stevia for a healthy, homemade ginger ale.

It has potent anti-inflammatory properties. And some people find it very useful in relieving pain caused by rheumatoid arthritis, osteoarthritis, and menstrual cramps.

As if all that weren’t enough, ginger has also been found to be extraordinarily effective in the treatment of migraines.

If you’ve ever suffered from a migraine, you know that it’s way more than a headache. Migraines make normal activities impossible for an estimated one billion people worldwide. And migraines are responsible for billions of dollars in health care costs.

But could a natural remedy like ginger really work as well as drugs, with fewer side effects?

Half the study participants were given one-eighth of a teaspoon of powdered ginger, and half were given a standard dose of sumatriptan, also known as Imitrex — one of the top-selling, billion-dollar drugs in the treatment of migraines.

The results? Both worked equally fast.

Most participants started out with moderate or severe pain. After taking either the drug or ginger, they were either in mild pain or completely pain-free. The same proportion of migraine sufferers reported satisfaction with the results, whether they took sumatriptan or ginger.

But with ginger, there were substantially fewer negative side effects. With sumatriptan, some people reported dizziness, a sedative effect, vertigo, and heartburn. The only adverse side effect for ginger was that two of the ginger-taking participants reported an upset stomach.

If you want to try the natural migraine remedy, mix 1/8 teaspoon powdered ginger in water at the first sign of a migraine. Drink it, and see if your headache lessens or goes away within half an hour.

Compared to sumatriptan, ginger not only spares you the side effects — but it also comes at about 1/3,000th the price. And it just might do the job.

Cinnamon is one of the most popular spices in the world. It’s made from the inner bark of a genus of a tree called Cinnamomum.

When strips of it dry, they curl into rolls, called cinnamon sticks. The sticks can also be ground to form a powder. This mild-mannered, delectable spice can flavor drinks, baked goods, oatmeal, stir-fries, and dishes both savory and sweet.

For thousands of years, cinnamon has also been prized for its potent medicinal properties. It’s loaded with polyphenols and other antioxidants.

Whoever knew that such a sweet spice could be so potent a healing force!

Hot peppers look a lot like bell peppers, but with one major difference. They contain a compound known as capsaicin, which is colorless and odorless — but definitely not flavorless!

Capsaicin is so intensely spicy that many people can tolerate hot peppers only in small amounts. The capsaicin that brings peppers their heat is also a powerful medicine.

In a 2017 study conducted on mice, researchers found that the capsaicin in hot peppers was able to alter the composition of gut bacteria, promoting more beneficial strains.

This, in turn, led to lower levels of chronic inflammation and obesity.

In another study, 16,179 human participants were tracked for an average of more than 15 years. After factoring out demographic, lifestyle, and clinical characteristics, the people who consumed hot peppers had a 13% lower rate of mortality throughout the study. Put in plain English, people who ate more hot peppers were more likely to live longer.

There are many varieties of hot peppers, and their level of capsaicin ranges from mild to intense. Some people love the spiciness, but others, especially children, may not. Here’s a tip: Instead of mixing hot peppers into a whole dish, you can arrange them on top or serve them separately.

A word to the wise: When you chop hot peppers, be careful to wash your knife, cutting board, and hands with soap afterward, and be sure not to touch your eyes before you’ve washed your hands. I’ve learned from personal experience that capsaicin can burn eyes (and other sensitive parts of the body!).

Plus There Are Many More Healthy Spices

Turmeric, garlic, ginger, cinnamon, and hot peppers barely scratch the surface in the wonderful world of healthy spices. Your spice cabinet is a virtual pharmacy of medicinal compounds.

Now that you know about the top five healthy spices, how do you use them?

Here are five recipe ideas that are useful in a variety of ways:

Sauces make delicious meals fabulously easy! Simply add them to sauteed or roasted veggies, a bed of greens, or grain or lentil bowls, and you have a quick and delicious dish. This sauce (which includes healthy spices like turmeric, ginger, and garlic) is creamy and packed with flavor and nutrition.

This broth is full of gut-healing and immune-boosting ingredients. Packed with veggies and seasonings, this flavorful recipe also includes three healthy spices: garlic, ginger, and turmeric. You can drink this broth as is, add veggies, or use it in other recipes.

Add a kick of heat to anything you want with your very own hot sauce made in your kitchen. While store-bought varieties often contain loads of salt and other not-so-good-for-you ingredients, this hot sauce — which you can make with multiple kinds of hot peppers — is salt-free and naturally sweetened with dates. And it also includes fresh garlic.

This super simple sauce can be made in five minutes and paired with coffee, drizzled over apple slices, or added to non-dairy yogurt or whatever you want. All you need are dates, cinnamon, and warm water.

Spicy and naturally sweet, this applesauce doesn’t need to be cooked and comes together quickly. Made with fresh ginger and ground cinnamon, you can enjoy it for breakfast, as a snack, or mixed into other recipes.

Spice Up Your Life the Healthy Way

Healthy food can be delightfully flavorful without unhealthy ingredients, like loads of salt and sugar.

Herbs and spices create dishes that engage the senses. And they’re packed with health-boosting, disease-fighting nutrients. 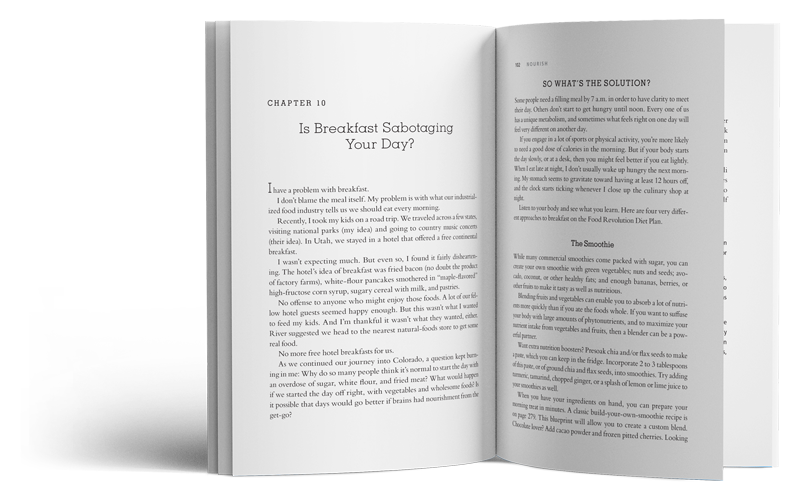 Do you want even more practical tips on how to break free from a toxic food culture?

In his new book, Ocean Robbins – CEO and co-founder of Food Revolution Network – explains simple steps that you can take NOW to live your healthiest life.


Tell us in the comments: